It seemed that almost everyone at the Young Landmarks Celebration party on the Lever House Terrace was flying off to another fete directly after. 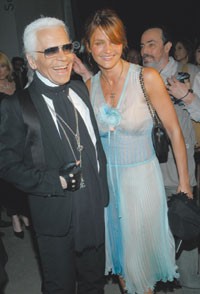 Alex Kramer jetted from Lever House down to Splashlight Studios for Dom Perignon’s party to launch the champagne house’s 1998 vintage, cohosted by Karl Lagerfeld. Once she witnessed the crush of people, however, she reconsidered. “You always go to these things and think, ‘Why?’ But I’m a fashion sucker. I wanted to see his boots. I can’t help it.”

Upon arrival, Lagerfeld paraded through the party, while paparazzi and guests holding out their camera phones followed closely behind. “This is why I don’t go out every night,” he explained with satisfaction, “because if I did, it wouldn’t be like this.”

But Moore, who was scheduled to appear later at Michael Cunningham’s party at the Maritime’s North Cabana for his book, “Specimen Days,” was a bit anxious for Lagerfeld to make his way to her and the others. “We’re waiting for Karl,” she said. “It’s kind of like, ‘Let’s go.’”

Cunningham’s was not the only book party going on Thursday night. Inside the penthouse suite of the Hudson Hotel, Gigi Levangie Grazer celebrated her much-written-about new book, “The Starter Wife.” Scanning the media-heavy crowd — which included Ian and Rita Schrager, Ann Dexter-Jones, Max Winkler, Lesley Stahl, Rupert and Wendy Murdoch, Simon Doonan, Donny Deutsch and Bettina Zilkha — the author couldn’t seem to find any examples of the book’s title. “The closest thing to a starter wife I had here was Patricia Duff,” she said, “and she’s not a starter wife. She’s a retired trophy wife.”

Were there similarities between Grazer’s husband, Brian, and Kenny Pollock, the earring-wearing “lawn mowing” (see sex dictionary) film producer-husband of the book’s heroine who’s undergoing a midlife crisis? Not at all, said his wife, while her husband concurred: “I am free of all affectations — except for my hair, which might be construed as one.”