The fashion flock descended on the Public Theater to celebrate the opening of Alessandro dell’Acqua’s flagship…Chatting with Beatrice Borromeo. 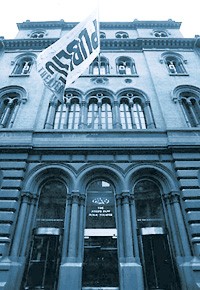 NEW YORK — The worlds of fashion and theater rarely collide. Designers seem more interested in dressing dancers (see Tara Subkoff’s collaboration with Stephen Petronio or Isaac Mizrahi’s with Mark Morris) than the cast of musicals. It’s a little peculiar, actually, considering how close Broadway is to Seventh Avenue. But Monday night, the fashion flock descended on the Public Theater, a cultural institution founded by Joseph Papp in the Sixties to bring theater to all New Yorkers, for an event to celebrate the opening of Alessandro Dell’Acqua’s flagship on Madison Avenue.

“To join forces with the Public Theater felt like a natural match,” said Dell’Acqua, “as my love for film and theater has always influenced my design philosophy.” The company donated $30,000 to the organization in tandem with the evening.

Hipsters, socialites and models — including Iman, Sophie Dahl, Eva Lorenzotti, Kirsty Hume, May Anderson, Padma Lakshmi and Dell’Acqua himself — took to one of the theater’s stages for a late-night cocktail party. Though it was a very downtown, arty crowd, there was a sense that these were people who wouldn’t normally frequent the Public Theater. And that was the point, according to Alexandra Shiva, one of the board members of the Public who has spearheaded a young member’s group called the Late Nite Committee.

“I heard one person explaining to another person who Joe Papp was and what he was about,” said Shiva, who couldn’t have been more excited about what she’d overheard. It encapsulated her mission to bring young people down to the theater, which also sponsors Shakespeare in the Park every summer. “We’re trying to generate an audience and a sponsor base that will bring the Public into the next 50 years,” she added.

Shiva and co-board member Sarah Murdoch founded the committee last season and wrangled 14 of their friends, who also happen to be boldfaced names. Among them: Hugh Jackman’s wife, Deborra-Lee Furness; hotelier Jeff Klein; Fernanda Niven, and actor Liev Schreiber, who is a trustee and has performed in many a production at the Public.

“Theater audiences can get stodgy very quickly. It’s true that audiences die off,” explained Schreiber Monday night. “You have to interest new people generationally and culturally. As a theater artist who doesn’t make a lot of money working in the theater, it needs patrons.” As for his contributions to the new group, “I’ve done nothing except listen to Alex Shiva’s great ideas.”

In the past, Shiva, who joined the Public Theater board when she was 26 eight years ago, has helped wrangle young patrons to the annual Shakespeare in the Park benefit. (Her family has been involved since Papp founded the space; she married her husband, Jonathan Marc Sherman, there last year.) Earlier this summer, however, the Late Nite Committee hosted its first stand-alone event: a performance of Tim Robbins’ political satire, “Embedded,” followed by a discussion about the war in Iraq moderated by board member Ken Auletta.

“The panel discussion was incredible. It was almost a left-right debate with a few voices in between,” said Shiva. “A lot of people said, ‘Please invite me back.’”

Committee members can choose a particular play around which they’d like to organize an event — the upcoming season includes new works by Stephen Adly Guirgis and Neil LaBute. A discussion about Shakespeare could have followed the Public’s current production of “Richard III,” which stars Peter Dinklage. But because of the play’s length, Shiva and her co-members felt a dinner at Indochine might be a better idea. Attendees included Ethan Hawke, Patricia Clarkson and Nancy and Andrew Jarecki.

Like everyone else involved, Shiva acknowledged the Public Theater is going through a transitional phase right now. George C. Wolfe, who has been the organization’s creative director since 1993, is stepping down at the end of this season. His successor has yet to be named.

“The idea is to spread out,” said Shiva. “We don’t want the same 200 people to be recycled at event after event, so we’re not yet pushing it in one direction or another.”