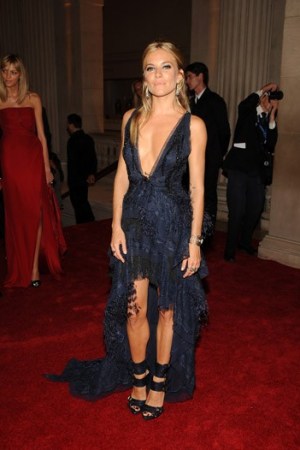 Kate Hudson at the SAG Awards, Fergie at the Grammys, Sienna Miller at the Met gala, Kristen Stewart and Dakota Fanning at “The Runaways” premiere and SJP everywhere in the ubiquitous poster for “Sex and the City 2.” There’s a common thread throughout all of these glamour shots, and it’s Pucci. Designer Peter Dundas has taken the traditionally print-driven house in a sexier direction that apparently leads straight to the red carpet, not typically known as a home for Pucci placement.

Dundas, who has supplemented the house’s signature graphic curlicues with ample glitzy fare, says that “Pucci has always dressed the stars. Even in its early days, Pucci was associated with women such as Marilyn Monroe and Jackie O.” Now, in lieu of advertising, Pucci — with the help of Hollywood stylists such as Cher Coulter, Tracy Cox and Rachel Zoe — has mounted an aggressive celebrity campaign that’s featured Zoe Saldana, Jennifer Lopez and a slew of starlets at last month’s Cannes Film Festival, where Dundas says the message is obvious. “To me it is great communication: Pucci girls are stars.”