As a "futurist," Faith Popcorn rarely looks back. 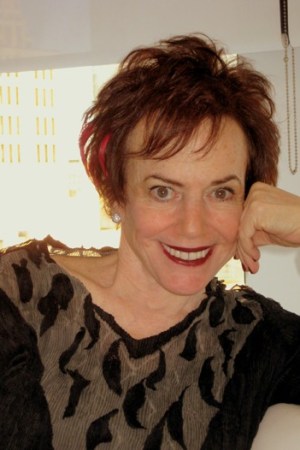 This story first appeared in the October 29, 2008 issue of WWD. Subscribe Today.

But the futurist — who confides her fantasy is creating a Fifties dream house — has been reexamining the Seventies, Fifties and Twenties, searching for patterns that may repeat themselves in these turbulent times.

“This is the era when ceo’s want crystal balls,” she said in her 16th-floor office at Faith Popcorn’s BrainReserve, where a wall of windows reveals the broad horizon of Manhattan’s East Side, accented by the U.N. Popcorn, whose father’s job in the Army’s then-Criminal Investigation Division, a predecessor to the CIA, meant a youth spent partly in China, voices concerns ranging from the emergence of a cultural Bermuda Triangle (ethics, environment, economy) to the future of General Motors.

“I wanted to buy a hybrid American car and finally Cadillac came out with one,” she said. “But you know what I’m scared of? GM stock is down to $1.99 [$6.25 Tuesday] — will I be able to get parts for that car? I never thought I would think that in my life. In Amerrr-ica!” She’s also balked at buying her 10-year-old daughter gg the BlackBerry she asked for, inclined to nix the expenditure.

Here, the futurist talks about what she sees as “the beginning of the end of world as we have known it.”

WWD: What do you think the single biggest impact of this economic crisis will be on the way people live their lives?

Faith Popcorn: Psychologically the rug’s been pulled out. We don’t believe in anything with a title. We despise institutions and corporations so much that ceo has become a curse word. There are T-shirts [like that]. If ceo’s stay that way in the mind of the consumers, we’ll have ethical panels running companies instead of ceo’s.

F.P.: Trends build. They get bigger. There’s another trend impacting this: ubercocooning. Bar sales are down. Look on Madison Avenue — empty. I think when the salesmen from the upscale stores like Armani give you a call, I think they’re even a little embarrassed.
The biggest impact is this lack of trust. An angry consumer. Icon toppling. Anchoring is big now — spirituality, atmosphere. This is the Bermuda Triangle of the culture: the environment is one side of the triangle, the ethics is another side, and the economy. Maybe in the Depression it [ethics, the environment and the economy] crashed. I’m starting to read back on the Depression. I think a lot of people are probably picking up “The Grapes of Wrath” now.

WWD: What about yourself, Faith? What is the biggest change you’ve made, if anything?

F.P.: Oh, so many. (She pauses.) I don’t even know where to start. I’m shopping in my own closet, as my sister likes to say. My clothing budget is very small. I took my kids to Target and TJ Maxx and the Gap, and there’s no reason to go out and spend hundreds and hundreds for a dress. You have more time. Maybe a lot of time was dedicated to buying and keeping up with. I’m down on the ground playing with my kids, not moving my schedule forward for the weekend.

WWD: Just the fact that kids in school use DayMinders is mind-boggling.

F.P.: My baby wants a BlackBerry. I go “You’re getting nothing, how’s that?” We have to save all the money we can save right now. I think that’s the tone of the country. I’ve talked to maybe 4,000 people [in the] last year. People are so pissed off, I can’t even tell you how angry they are.

WWD: Are there any ads that you think are good for these times?

F.P.: Have you seen any ads you like? I mean, I’m really trying to think. No.

WWD: I wonder if there could be an upswing for the magazine and newspaper businesses because…

F.P.: …you’re home. There might be. It’s the first time that I’ve been able to read my stack. Everybody has that stack, right? I read a lot, across the board, and we have professional readers.

WWD: Are you working on any book projects?

F.P.: I’m working on a book. Next five years — what’s it gonna be like? Who’s gonna succeed? Who’s gonna fail? When you see all the banks go down, you think, hey, that’s not the only thing that’s gonna go down. There’s gonna be some companies that we feel very close to and [are a] part of our lives that are going to go down.
We are going to be doing a lot of traveling on the Internet. Get me out of here — wheeee. And we’re going to be taking drugs with that travel.

WWD: Drugs, what do you mean?

F.P.: This [“The Stone Gods” by Jeanette Winterson] is one of the best books I’ve ever read. It’s about the future, of course. She loves to not tell you the sex of the character. It drives you crazy. And there’s a robot in there; I think it’s a girl. It’s about ceo’s running the world of the future like a corporation. And boy does it not work.

WWD: It’s interesting in light of our having a mayor in New York [Michael Bloomberg] who comes from a corporation.

F.P.: Yeah, I think he’s done a good job, unless you ride to work in Manhattan and go bump, bump, bump, bump. There are so many potholes. I’ll tell you one thing: There’s no bedside manner in the way he runs things. You know, bedside manners can be very important. We talk about these new values of goodness, empathy, simplicity and happiness — and those are the four things that should be in your products. We’ll pay a lot for happiness, for joy, for laughter. I hear people say they can’t even get drunk anymore.

WWD: You mean they don’t want to get drunk anymore?

F.P.: They drink and nothing happens. They’re too upset. What happens with trends is they morph, they intensify, they twist.

WWD: What does that mean for the apparel business?

F.P.: They have to find a new benefit in clothing, besides being warm and protected of cover. I think the benefit will be how it makes you live your life better. We talk about goodness. Is this piece of clothing made from a good company? Is it made in a good way? Is it sold in an empathetic way? Does it improve your chances of doing well in the world?
What a company stands for is going to be almost more important than what the line of clothing is. Who am I buying from? Who’s the chairman? Who’s the designer? What kind of life does that person lead? I want that corporate logo stripped back; I want to know what I’m getting. It’s going to be much more raw and much more personal.

WWD: You’ve hinted at the end of our culture as we know it. Is there a hallmark of that beginning?

F.P.: Well, it is the beginning. People taking a lot of money out of the bank and putting it in their home safe. The price of food. I’d say when you’ve started mistrusting where your money is, it’s a hallmark.
The movie I think exemplifies the new ethics in this country is called “Flash of Genius.” It’s a [Universal Pictures] movie about the guy [Robert Kearns] who invented the intermittent windshield wiper in the Fifties, and Ford stole it from him. He gave up everything to go after Ford. He lost his wife. It took him 12 years. Even though they offered him $30 million eventually, he didn’t take it.

WWD: What period is it set in?

F.P.: The Fifties. I love the Fifties. The innocent, beautiful Fifties where we women were all complaining about being discriminated against and, really, we were on vacation.

F.P.: I have watched a couple of them. I love it. I think I’m going to get the whole season.

WWD: The first season, the 1960 season, recalls the Fifties in many ways.

F.P.: Yeah, everyone is smoking, having three martini lunches. And no women in powerful positions.