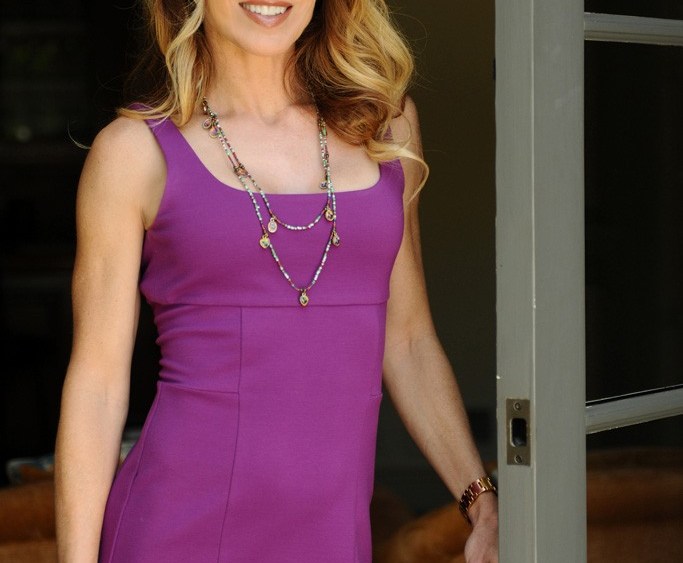 Gigi Levangie Grazer has had enough life experience in Hollywood to keep her creative juices flowing for a long time.

Still, she says, “Every time I’m having a block, I see or hear something and realize I’ll never run out of material.” The author of “Maneater,” “Queen Takes King,” “The Starter Wife” and “The After Wife,” published July 10 by Random House, weathered her own drama when she and producer Brian Grazer went through a very public divorce, which they finalized in 2009.

But Grazer has since tried to find her inner Zen. “I love yoga but it also makes me angry.

I’ve gotten into fights about a third of the time I go,” she laughs. “But I’m a single woman of a certain age, so I do yoga, and I can do splits in both directions. It’s a prerequisite for dating,” she jokes.

Grazer says locals like her books because “when it’s familiar to you it’s funny. It legitimizes what you’re already thinking.” And for everyone else? “I just want to show people outside of this bubble the circus of what goes on here.” Grazer will be about 3,000 miles outside of the Hollywood bubble next week when Christopher Burch hosts a cocktail party in honor of the book at his Southampton home on Aug. 10.

WWD: Some of your characterizations are pretty scathing. Do people realize when you’ve called them out in one of your books?
Gigi Levangie Grazer: Sometimes people relate so much to a character in a book that they think it’s based on them, and they’re always wrong. And yet the people who don’t see themselves at all, those are the people who are in the books. During parties for “Starter Wife,” a lot of women would come up to me and say, “I loved your book” and I would think to myself, “Did you not recognize yourself on page 121?” I think there’s not a lot of self-reflection going on.

WWD: Why do you choose to live in Santa Monica instead of Hollywood?
G.L.G.: What I like about this neighborhood is there are kids all over the place. [When I was married] I was living a mile above Sunset in an incredible house, 20,000 square feet on three-and-a-half acres, and I was scared to death because if someone ever got over the wall there was nobody to hear you scream. I find those places very beautiful and very isolating, so I wanted to be in a real neighborhood with sidewalks where you can walk to school.

WWD: Where did you get the idea for “The After Wife?”
G .L.G.: It was based on a number of interviews I did during my “Starter Wife” book tour. A number of women who came up to me were relatively young widows. I thought their stories were so funny and poignant and there were so many emotions involved. And death, unfortunately, is a universal theme.

WWD: What has the reaction been so far?
G.L.G.: So many readers relate to the widow story and have told me they felt like I understood on some level what they were going through. I was really pleased about that because you can never know completely. It comes down to putting yourself in that person’s place and imagining the worst-case scenario. That’s been the most satisfying thing, because I use humor as a tool to show emotion. Perhaps I’m in denial, but it works.

WWD: You lived briefly in New York. Which city do you think is more compelling from a story perspective?
G.L.G.: L.A. really has two faces. It appears easy and funny and friendly, and it can be, but the other side of it, which is the reason people come here, is the dream to make something of themselves. So there’s a whole struggle that goes on beneath the surface. And I find that more interesting than what I perceive to be going on in New York.

WWD: Tell me about your next book, “The Sister Effect.”
G.L.G.: It’s due in two weeks and I haven’t written the ending yet! But it deals with two sisters and their relationship. One is the “perfect” woman, and the other one has what’s perceived to be faults, but it turns out that they actually need each other. We’ll see what my sister thinks when she reads it. I have three, but I’m not saying which one the book is based on.