Apolo Anton Ohno offers his take on fatherhood, his future and fashion. 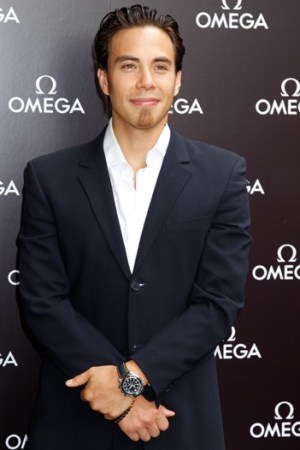 Apolo Anton Ohno credits his father as being the backbone of his career. So as Father’s Day approaches, the eight-time Olympic medalist was in New York to visit the Omega watch store on Fifth Avenue to pick out a Father’s Day gift, a $4,850 Aqua Terra model, which he called: “Bad to the bone.” Here, Ohno offers his take on fatherhood, his future and fashion.

WWD: Your dad gave up a lot to help you launch your athletic career.
Apolo Anton Ohno: When people think of an Olympic athlete, they always ask, ‘What kind of sacrifice did you have to give?’ They don’t understand that families also give. For me, it was my father. We have a very small family, very tight knit, and my dad knows firsthand what it takes to become an Olympic athlete. He’s really lived it and been through the trenches with me in my Olympic pursuit. Even now, I look to my father for advice.

WWD: Have you made a decision whether you’ll continue competing at the Olympic level?
A.A.O.: Not yet. From a physical perspective, I definitely can consider at least two more Olympic Games. I just turned 28. But we’ll see. I’ve spent almost 16 years in the game and lived like a monk for many years. So I’m just exploring things and doing some things outside the sport. I’ll definitely be in Sochi [at the next Winter Games in 2014], either in my skates or [behind a microphone.]

WWD: What kind of things have you been doing since the Games ended?
A.A.O.: I’m very, very busy. I recently launched a new company, a nutritional supplement named 8 Zone. I’m working on a book, which is due out this fall. I’ve been spending a lot of my hours with my ghost writer. I’m also doing a lot of speaking — not just from a corporate perspective, but also to a lot of middle school and junior high school students, just trying to get kids back on the right path. I want to teach them about some positive aspects of their lives, help spark interest about their unique talents that they may not have seen before. Junior high kids are at an age when they can teeter on the fence and go either way. Luckily for me, I had a good father, and the sport helped change my life and showed me the direction I could go down. I’m just trying to tell kids it’s not how you start, it’s how you finish. And then I’ve been doing a lot of film, TV and entertainment activity, trying to build myself there.

WWD: Tell me a little about your personal style.
A.A.O.: I love fashion. I’m wearing an Armani suit, a Dolce & Gabbana shirt, Moreschi shoes, a Gucci belt and an Omega watch. I love wearing suits. I think it’s only proper in New York City to have a nice dress shirt on, or at least a jacket. In L.A., people wear T-shirts everyday so it’s a little bit of a different vibe. If it came down to it, I’d wear a suit everyday — I’d wear a suit to sleep.

WWD: What about when you’re just hanging out? Do you wear jeans?
A.A.O.: Yes, but I say it’s always better to be overdressed than underdressed. You should always look sharp.