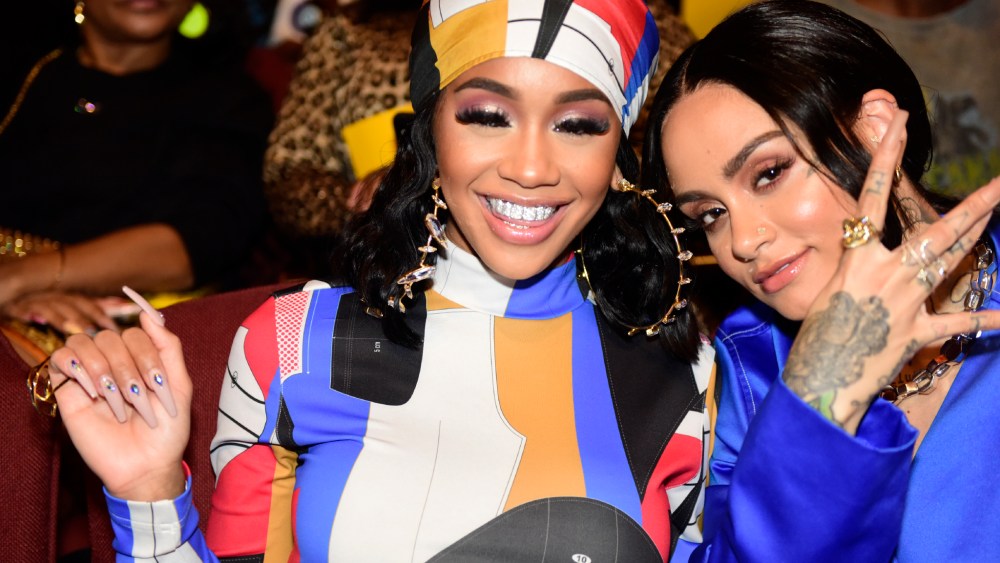 If Jeremy Scott’s front row is considered a madhouse, then the front row at Pyer Moss Sunday night was a pleasant picnic.

“G–damn, this is crazy. Watch your body,” Slick Woods, wearing a dark pair of sunglasses and an unzipped leather jacket with no shirt said, as a photographer pushed by her. Fans, friends and idlers were all trying to either catch a glimpse of, or say hello to, the stacked VIP area inside the Kings Theatre in Brooklyn’s Flatbush neighborhood. Kehlani, Offset, Quavo, Joan Smalls, A$AP Ferg and Renell Medrano, Chris Bosh, Jidenna and many more were all front and center. Karrueche Tran checked her reflection in the mirror of her purse next to Victor Cruz, who showed her something on his phone that made her laugh. Justine Skye said “hi” to members of her former label Roc Nation, and Normani, dressed in Pyer Moss x Reebok, roamed the area, too — as well as she could, anyway, since the bottlenecking was so intense that some people had to stand flattened against the runway to make way.

Aside from all the commotion near the stage, there was an air of genuine joy, fun and family among the celebrities — who hugged and kissed one another like old friends.

“In college, I had a friend that told me he had a friend who designed clothes,” Ferg said. “I had a brand I was working on, so I went to Kerby’s school to get some opinions, some knowledge on clothing.”

He added there’s never been tension between those from his home turf, Harlem, and Brooklynites.

“Never,” he said. “That’s just where we’re from. The whole thing is presenting us to the world, and that’s the common ground we stand on. It’s not about Brooklyn or Harlem, it’s about representing who we are to the world.”

Skye also has a history with Jean-Raymond, since she’s from Brooklyn, too, and was a part of the Pyer Moss show two years ago.

The actor and musician Jidenna sat to the side of the hubbub and moved seats with no argument when a member of the house staff asked him to. He recently released his second studio album, “85 to Africa,” after a long hiatus from the limelight. During that time, he said he finished the content for his next two albums, after writing 120 songs — 18 of which made the cut for the upcoming records.

“I want to make 30-minute albums — I don’t want to make longer,” he said. On the acting front, he hinted that come 2020, he’ll be “delving further into the craft” — but said no more than that.

The “Classic Man” artist recalled the night before, which he spent with fellow Wondaland musician Janelle Monáe at the Ralph Lauren show, where she performed.

“It was like something out of a movie,” he said. “Man, I’ve seen her perform, I don’t even know how many times, and she still amazes me. Last night, I felt like I was transported back to the Fifties. And she stood on the tables.…with the Champagne.”

He scanned the theater quickly, which was filling up as the minutes ticked toward 11 p.m. “Yeah, I love when people wile out,” he said.