Clearly she felt it was time to cover up for the Royals. Here, Carla Bruni-Sarkozy all glammed up in Dior at the State Dinner at Windsor Castle. 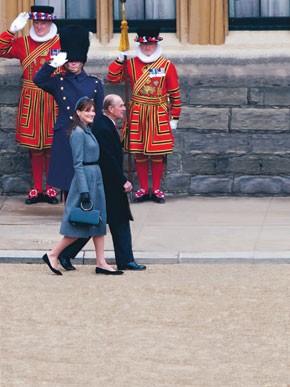 LONDON ­— Clearly she felt it was time to cover up for the Royals. As racy photos of her were splashed all over the British tabloids and magazines, French first lady Carla Bruni-Sarkozy toned things way down Wednesday as she and her husband, President Nicholas Sarkozy, landed here for a 36-hour charm exercise. And Bruni-Sarkozy played it by the rules — wearing flats so she didn’t tower over her diminutive husband; going even a bit dowdy in a gray midcalf-length belted dress by Dior to meet Camilla and the Queen, and borrowing a page from Jackie O with a matching pillbox hat. As she walked with Prince Philip and rode in a gilded carriage through the cobblestoned streets, Cinderella Carla, even a demure one, brought a much-needed shot of glamour to the frumpy Windsors.?

Talk about a contrast.

As Carla Bruni-Sarkozy went through her official duties as French first lady here Wednesday, even the most ardent Brit must have been wondering what happened in the chic stakes. Bruni-Sarkozy may have landed at Heathrow wearing a gray Christian Dior calf-length dress and Dior’s new Babe handbag, which made the former model look more Ma’am than Madame, but the second she stood beside Camilla, Duchess of Cornwall — and later, Queen Elizabeth II — it became clear that, even when they’re trying to be sedate, French chic is au naturel.

And that was what she was all over the British tabloids and in British GQ, as the Brits greeted her in their inimitable way. But all that seemed to fade away the second Bruni-Sarkozy and her husband, French President Nicholas Sarkozy, stepped off the plane, where they were greeted by Prince Charles and Camilla (in some strange feathered hat) and then whisked off to Windsor.

The day was a blur of official appointments — including lunch with the Queen, a visit to Westminster Abbey, and an address by Sarkozy to both houses of Parliament.

For lunch, Bruni-Sarkozy wore a ribbed wool Ottoman gray suit, and for her visit to the houses of Parliament, she wore a light gray wool jersey dress with a navy wool coat.

Earlier on Wednesday, the Queen gave Sarkozy the title of Honorary Knight Grand Cross of the Order of the Bath, an honor previously given to other world leaders.

And there were other gifts in store: The Queen gave Sarkozy — reportedly a keen stamp collector — framed blocks of stamps issued by the U.K. and French postal services in 2004 to celebrate the centenary of the Entente Cordial.

She gave Bruni-Sarkozy a miniature carriage clock in a leather case. The French couple — clearly knowing where her heart lies — reciprocated with an 18th-century French book, “Perfect Knowledge of Horses,” and two Lalique crystal horse sculptures, for the Queen and a bronze statuette of a hunting dog for Prince Philip. (What, no corgi?)

The day culminated with a state banquet, hosted by the Queen at Windsor Castle. The 160 guests at the white-tie gathering included Prince Charles; the Duchess of Cornwall; David and Samantha Cameron; Sir Evelyn and Lady de Rothschild; Prince and Princess Michael of Kent; Prime Minister Gordon Brown and his wife, Sarah Brown; chef Michel Roux, and a clutch of politicians, cabinet ministers, British aristos and ambassadors.

Sarkozy, dressed in made-to-measure white tie from Prada, and his wife, in an elegant Dior navy blue gown, dined on catfish fillet (a relatively common dish in France), followed by lamb noisettes, cauliflower, carrots with tarragon, potatoes and salad. For dessert, there was savarin with rhubarb served with vanilla cream.

The meal was prepared by the royal chef Mark Flanagan.

The wine list included a Château Margaux, Premier Grand Cru Classe’ and a magnum of Krug 1982. After the guests took their seats, the Irish Guards piped the royal procession, led by the Queen and Sarkozy.

Bruni-Sarkozy will get to show her style off more today, as sources said she has packed only French couture for her trip. Even her accessories are all French — Roger Vivier, for instance, is said to have made several plaid accessories for her. And don’t expect to see her in her favored pants — banned by the Queen — or high heels, which would mean she would be taller than her husband.

The schedule today had the French couple meeting the British masses — or at least a very select slice of them. Sarkozy will hold a political summit with Gordon Brown and French and British cabinet ministers at the Arsenal Emirates Stadium in north London. Arsene Wenger, Arsenal’s French-born manager, will briefly meet the two world leaders.

Raymond Blanc has whipped up a menu of wild Scottish salmon (presumably in honor of Brown’s homeland), with cod flakes and cucumber ribbons, followed by roast breast of Gressingham duck in jasmine tea sauce. For dessert, there will be caramelized pears in a brioche, bien sur.

Bruni-Sarkozy and Brown are due to deliver their first televised speeches since their respective husbands took office.

— With contributions from Nina Jones, London and Miles Socha, Paris