The annual Trooping the Colour ceremony, which normally draws royals young and old to the main balcony of Buckingham Palace, was a restrained affair that took place at Windsor Castle, with only Queen Elizabeth in attendance.

LONDON — In a sign of the times, and for the first time in her 68-year reign, Queen Elizabeth watched the traditional military pageant known as Trooping the Colour at Windsor Castle, with none of her family by her side.

Trooping the Colour is an annual ceremony that marks the official birthday of the British monarch, no matter when he or she happened to be born. This year’s event was downsized to a “mini-Trooping,” due to quarantine and social distancing measures in the wake of COVID-19.

A tradition that began in 1748, Trooping the Colour takes place each year on the second Saturday of June. At the end of the military parade, the Queen and members of the royal family traditionally gather on the Buckingham Palace balcony to watch the RAF flypast.

What a difference a year can make: Last June, Meghan Markle, decked in a midnight blue Givenchy dress by Clare Waight Keller and hat by Noel Stewart, rode in a carriage to Buckingham Palace with her husband Prince Harry and the Duchess of Cambridge as part of the event. 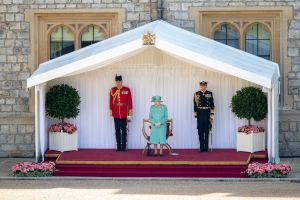 The Duchess of Sussex had taken a break from her maternity leave to attend the ceremony. Now, she and Prince Harry are living in California and are no longer carrying out royal duties.

Last year during the ceremony, Prince William, who holds the position of royal colonel of the Irish Guards, rode up The Mall in London on horseback next to Princess Anne and Prince Andrew. Last year, Prince Andrew was forced to step back from all royal duties due to his links to the convicted pedophile Jeffrey Epstein, who died in prison last summer.

As a result of lockdown and quarantine measures in England, the Queen and her husband Prince Philip, who marked his 99th birthday last week, have been living at Windsor Castle, outside London.

On Saturday, the Queen was the sole member of the family to watch socially distanced members of the Welsh Guard march in a drastically shrunken ceremony.

The Queen, two officials by her side, sat on a dais during the event, which was her first official public appearance since lockdown began. The marching soldiers were accompanied by a band of the Household Division. 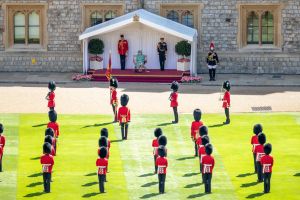 The ceremony took place as thousands of right-wing activists and football supporters, descended on central London, near Downing Street and the Houses of Parliament, to “protect” symbols of British history and “guard our monuments,” according to the BBC.

They gathered despite government warnings for people to socially distance. A Black Lives Matter protest was canceled for Saturday due to plans for the counter-demonstrations, while the government has said all protests must end by 5 p.m. local time today. BLM rallies and demonstrations are nevertheless taking place in London and elsewhere. 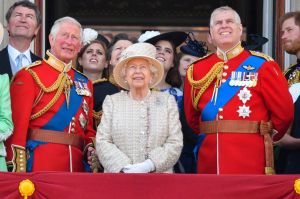 Members of Britain’s royal family at Trooping the Colour in June of 2019.  Tim Rooke/Shutterstock

Priti Patel, Britain’s Home Secretary, on Saturday condemned the “unacceptable thuggery” of demonstrators who clashed with police as they stood in front of monuments. They threw glass bottles and other missiles at police.

Monuments across the U.K. of historical figures, some of whom made their money in the slave trade, have been toppled or defaced during the anti-racism protests. The protests taking place in the U.K. have been infiltrated by extreme, violent factions on the political left and right.