The Oscars are as much about dressing up to the nines as anything else, and so it wasn't surprising that several actresses swapped their red-carpet garb for party dresses Sunday night. 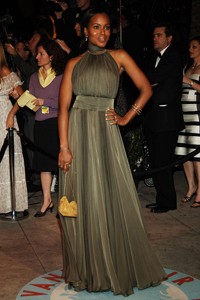 The Oscars are as much about dressing up to the nines as anything else, and so it wasn’t surprising that several actresses swapped their red-carpet garb for party dresses Sunday night — perhaps hoping to garner an extra photo op. Uma Thurman donned a second pink-nude Atelier Versace and Karolina Kurkova followed suit with Marchesa. Keira Knightley swapped her Vera Wang for Missoni, Jessica Alba traded her Atelier Versace for Yves Saint Laurent, and Naomi Watts doffed her Givenchy for Christian Lacroix. But it was Sasha Cohen, in Pamela Dennis, and Lindsay Lohan who trumped them all with a total of three wardrobe changes. Lohan hit Elton John‘s party in Christian Lacroix, arrived at Vanity Fair in Versace from the Gianni days, then changed midway through the fete into a Calvin Klein number. Surely La Lohan, who is known for her compulsive switches, holds the world record: seven changes in one day during her press junket for “A Prairie Home Companion.”