CANNES — Lost or late luggage can be a real drag — unless your name is Salma Hayek and your destination is Cannes to sit on the jury of the film festival here. Louis Vuitton, Fendi and others — who have hotel suites bulging with... 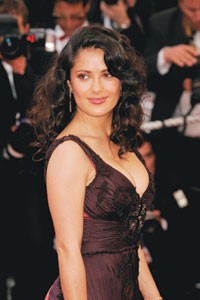 CANNES — Lost or late luggage can be a real drag — unless your name is Salma Hayek and your destination is Cannes to sit on the jury of the film festival here. Louis Vuitton, Fendi and others — who have hotel suites bulging with frocks and bags — were among those who gladly came to Hayek’s rescue as the 58th edition of the festival kicked off here Wednesday night in a low-key way.

Hayek, her hair in soft curls and her curves caressed by an embroidered, two-tone Prada gown, was one of the rare highlights on the red carpet for the opening-night film, “Lemming,” starring the two Charlottes — Gainsbourg and Rampling. The former went edgy for opening night in feathered Balenciaga; the latter was a sullen foil in monastic vintage Yohji Yamamoto.

Gainsbourg, who wears such cool brands as Martin Margiela and Lanvin in the eerie film, insisted director Dominik Moll chose all her outfits. “But, yes, it was my style, too,” she demurred on Thursday, in a naval-inspired Balenciaga sweater and skirt. The actress will soon trade modern cool for polyester: she’s slated to portray Bob Dylan’s wife, circa the Seventies, in an upcoming film.

Hayek, meanwhile, on Thursday was pleased to report she got her own clothes back. “They found it,” she said of her lost luggage. “There were eight pieces.”

Back on the red steps at Cannes on Wednesday, long, relatively spare gowns in black and white — or blinding color — were the main trends, along with long drop diamond earrings by Chopard, which must have brought in truckloads of them. But with the weather unusually chilly there was a fair bit of fur, too, with Catherine Deneuve dragging a stole with her vivid Jean Paul Gaultier gown. The red carpet was short on Hollywood A-listers of the Nicole Kidman variety, leaving the likes of Dennis Hopper and Billy Zane to hog the limelight, zig-zagging from photo pit to photo pit and overstaying their welcome.

Still, the competition for fashion credits remains as stiff as that for the coveted Palme D’Or. Both Dior Homme and Louis Vuitton issued releases saying they had dressed jury president Emir Kusturica. Oops. (For those who care about such matters, his tuxedo was in fact by Vuitton.)

The glam factor picked up Thursday afternoon thanks to Scarlett Johansson, star of Woody Allen’s “Match Point,” who turned up at a Chopard-sponsored beach party wearing Imitation of Christ with a lace top. She said it was her first time in Cannes. “It’s so stunning here — and a little crazy. But it’s very glamorous.”

With the premier of the final “Star Wars” installment slated for Sunday — and star Natalie Portman said to be armed with Chanels, Diors and Pradas — the weekend should bring more fireworks and less fizzle. Also heading to Cannes in the coming days are said to be Penelope Cruz, Diane Kruger, Sharon Stone and Eva Longoria and Mischa Barton, proof that hot TV shows can have as much impact at Cannes as a movie.

There are even rumors of an impromptu concert by Destiny’s Child. Our advice to Beyonce: Pack light.