The artist's work mines the anxiety-ridden relationship women have with their appearance. 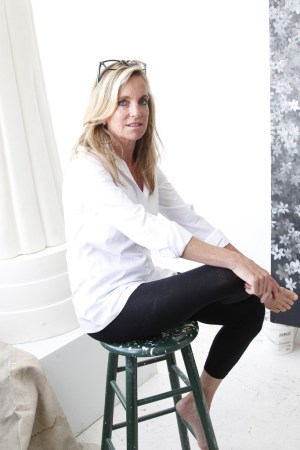 Rachel Hovnanian’s Chelsea studio, where she sculpts and photographs and later displays her occasionally interactive art, is large, airy, whitewashed, filled with shiny objects and, on this day, flooded with sunlight. A gigantic beauty-pageant trophy carved from marble stands in a far corner. It’s an imposing figure: barely smiling, 10 feet tall, her roses and tiara as much a part of her form as her arms or legs.

“I grew up with what you could call ‘intellectual’ parents in Texas; my dad was an English teacher,” the artist explains in front of an arcade-style claw game that provides gilt pageant-style trophies as prizes. She holds a trophy she recently won from the game in her hands as she speaks.

“[My parents] always told me that it’s what’s inside your head that counts,” Hovnanian continues. “You grow up hearing that all the time, and then, you know, I’m here, growing up in Texas. And I just turned to them one day and asked, ‘How could you even say that? Of course it matters what you look like!’ ”

Hovnanian herself is petite, with blonde hair, large blue eyes and a winsome smile. She is energetic and friendly, clever and charming. She wouldn’t seem hugely out of place at a beauty pageant, yet the anxiety-ridden relationship women have with their appearance plays a central role in her work. There’s her “Wall of Confidence,” an 8-foot-by-2-foot frame containing identical jars of “Texas Beauty Queen Cream,” each plastered with a different slogan taken from actual advertising in the beauty industry.

“Imagine…having the confidence to approach new people,” one tub offers.

“This product will change your life,” another promises.

“Well, there’s a reason my latest show is called ‘Power & Burden of Beauty,’ ” Hovnanian says, showing a row of her photographs from her past exhibition, “Too Good to Be True.” Beauty queens cast in marble, gilt or wax pervade the illustrations. Some clutch knives, stabbing the competition (“Beauty Queen Backstabbers” and “Backstabbers II”). One has just come off a shopping binge and is perched in a four-poster bed in front of her balding, much older husband. (“That one’s called ‘No Prenup,’ ” the artist explains with a grin.) In another, a beauty queen with body dysmorphic disorder sees an engorged version of her actually trim self in the mirror in the changing room.

“That’s ‘Size 0,’ and actually plays into my latest exhibition, the ‘Fun House Changing Room,’  ” Hovnanian explains as she walks toward a new mirror. “The changing room is where you see all these physical faults and you’re really alone with them under this bad lighting and you’re trying on a swimsuit — it’s the most intimate piece of clothing that we ever wear in public, and you can just feel so awful about yourself. And you usually do.”

First displayed in 2009, “Fun House Changing Room” incorporates a visibly warped mirror (it obviously shows its curves and twists, “unlike those in actual department store dressing rooms,” Hovnanian laughs) and a series of white one-piece swimsuits labeled in their respective sizes. Approaching the mirror, a motion sensor triggers an audio recording, in which a beleaguered voice tells viewers how unattractive they look.

“You need more Botox,” the voice sighs. “You can’t wear this out there. She wore the same thing, you saw the pictures on Facebook. She looked so much better than you. You shouldn’t have eaten those Cheetos.”

Hovnanian is taking the installation to Los Angeles to exhibit at the Art Platform Art Fair through the Leila Heller Gallery from Oct. 1 to 3 along with some of her works from “Too Good to Be True.” While in L.A., she’ll be celebrated by Nadja Swarovski and Sue Hostetler, editor-in-chief of Miami Art Basel magazine, at a dinner at the Chateau Marmont tonight. Swarovski has given Hovnanian a selection of crystals with which to craft a piece for the Women for Women Making a Difference Awards. A percentage of the proceeds from the sale of the piece will go to Swarovski’s foundation.

“I try to confront our obsessions as a culture with beauty and youth and Photoshopping and gossip in my work,” Hovnanian explains, sifting through a plastic crate wherein she keeps the dollhouse miniatures she uses for her tableaus. There are bottles of prescription drugs that would fit inside a pen cap (the pills are actually loose in the bottle and shake around, some “Valium” is loose in the crate), rolls of toilet paper, packs of gum the size of a freckle, laundry products, shoelaces, silverware. It’s difficult to pick these things up with fingertips without obscuring some of them, but Hovnanian brandishes a tiny package of feminine sanitary products, pinched between her thumb and pointer finger, eyebrows raised.

“I’m trying to confront these things,” she says, “before they devour us all alive.”