Called "Open Secrets," the exhibit will run July 20 to Sept. 15 at the Medici Palazzo Museum in Tuscany's Seravezza, spanning 10 years of works by the New York-based artist.

SERAVEZZA, Italy — Technology’s overpowering reach into our daily lives and equal opportunities for women are hot topics of the moment, yet these are issues that Rachel Lee Hovnanian has been exploring throughout her artistic career.

Hovnanian is breaking the glass ceiling by unveiling the first solo exhibition staged by a woman, and the first American to boot, at the medieval Medici Palazzo Museum in Tuscany’s Seravezza, a small town near luxury beachside resort Forte dei Marmi. With a press preview Thursday, the exhibition “Open Secrets” will be inaugurated on July 20 and run until Sept. 15, and is also the first to present several of Hovnanian’s main works together, flanked by new pieces.

“Growing up, my mother was a feminist and she made me think about things, about what’s in your head and not outside,” says Hovnanian during an advance walk-through, eloquently explaining her work, which is informed by a desire to go beyond appearances. The titular “Open Secrets” definition aptly points to several of the hidden issues that marked — and one would dare say, marred — the artist’s childhood, such as her father’s addiction to alcohol.

“We all have something hidden, but it’s important to be able to talk, and art is how I can express myself,” says the friendly and unassuming Hovnanian. Admitting she had struggled with dyslexia, she points to “Shhh,” a Carrara marble statue of an angel with its mouth taped — illustrating the suppression of truth and the expression “be an angel and keep your mouth shut.” Her dyslexia was somewhat helped by technology, fixing misspellings and allowing the use of acronyms, but at the same time, the artist started realizing around eight years ago how everyone — including herself — was “consumed” by phones and that, rather than saving time, technology was keeping her even busier in a life that was “filled with people and things that were not real.”

Case in point: One of the installations, “Dinner for Two,” shows a huge marble table prepared for an elegant meal with monitors reproducing husband and wife, representing the lack of communication and interaction within modern families. The installation’s audio plays only the notification sounds of two smartphones. 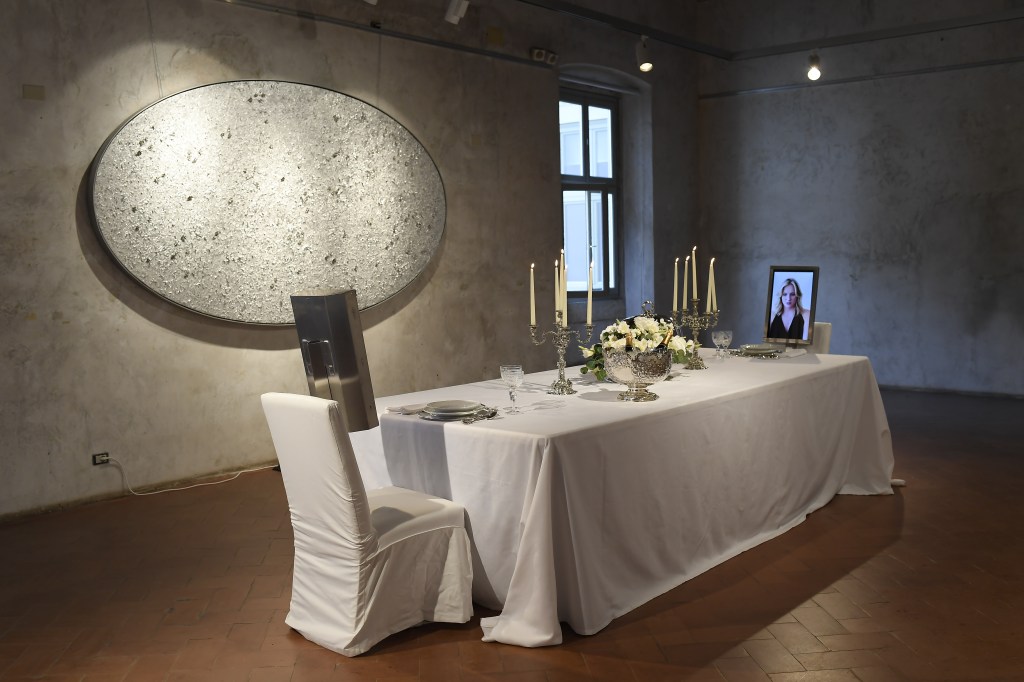 The “Dinner for Two” installation and the “Reflections Pool III” work.  Giovanni Giannoni

Similarly, “Foreplay” is an installation of a vertically placed mattress on which a video is projected showing couples lying in bed, each separated by their own digital screens, together yet at the same time alone, in a bedroom lit up by the bluish light of the devices.

The modern settings contrast with the palazzo, designated a World Heritage Site by UNESCO.

“This actually shows how brave Rachel is to accept to present her work in such a storied location, where we had to devise ways to display the paintings without touching the walls,” says curator Annalisa Bugliani, who praised the artist’s “inexhaustible intelligence and logical mind.” Bugliani says Hovnanian knows “intuitively how to express her thoughts through a child-like side which is in contrast with her experience and emotions as an adult.”

Hovnanian has been traveling to this part of Tuscany for years on holiday, but also working in Carrara, known for its beautiful marble, and at the nearby Pietrasanta foundry.

While based in New York, she was raised in Houston, and through her works has been questioning Girl Scout rules; beauty pageants, including the obsession with perfection illustrated by the 11-foot-tall “Beauty Queen Totem” Carrara marble statue; debutante balls; young girls’ reputations, and the myth of perfection.

The artist realized that her childhood, playing with children of astronauts based in Houston, provoked a series of works related to the real and fake dualism. “I remember I wanted to drink Tang because that’s what my friends there would have at home and my mother could not understand why I would rather have that instead of real, freshly squeezed oranges,” she says.

This also led her to think about genetically engineered babies and her impactful “Perfect Baby Trophy Room,” a mixed media installation that imagines a world where parents can select their ideal baby from a menu of perfect infants. Placed in laboratory bassinets on packets of Cheerios, the babies are life-like and Hovnanian explains that she had to “adopt” these dolls. “Many couples prefer these babies that feel real but they don’t cry, don’t get sick and don’t age. Just as we get addicted to sugar with these cereals, why wouldn’t you want a genetically engineered perfect baby?” she rhetorically asks.

There is also a “Baby’s Nursery” mixed-media installation, featuring an antique crib filled with empty liquor bottles. The notion of a parent protecting their child is “disrupted by bottle labels instructing children how to behave with an alcoholic parent,” explains the artist. 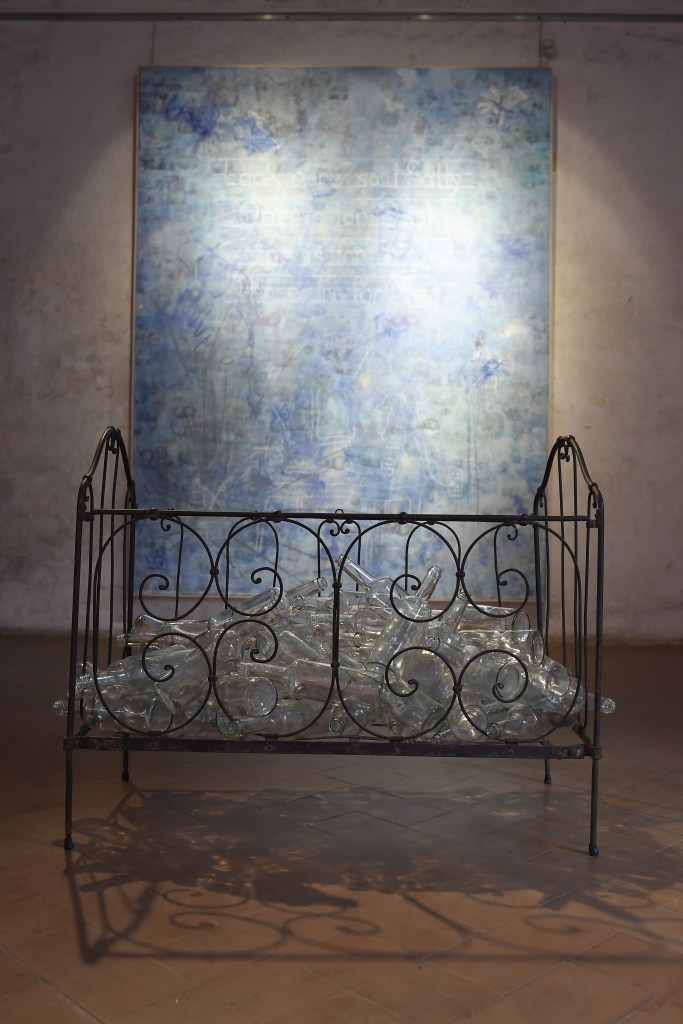 In “Night,” a mixed media on canvas, a white picket fence and “Johnny Walker came to visit” written above a childlike drawing of a house, refer to the ideal childhood that escaped Hovnanian, reflecting on the effects of alcoholism on family life. “We didn’t talk about it,” she says, referring to her father’s alcoholism — another reference to the “Open Secrets” title.

A new, intriguing work stemmed from realizing that some people conceive their own idea of an artist. “I’ve been told, you don’t look like an artist, which made me think, what does an artist look like?” To respond to this question, she created “Swipe Left, Swipe Right,” placing rows of white bleach bottles differentiated by iPhone Animojis, inviting the viewer to visualize their own idea of an artist. At the same time, a video runs in the background with the Animojis voiced by Hovnanian. “This also made me think we are returning to the Renaissance, when you could choose how to be represented in portraits. Now we do this with our apps,” she says.

Hovnanian admits her excitement over her first solo exhibition and confesses she would “love for it to travel.”

“I like to create a conversation as an artist,” she explains. “But when people come to thank me, this for me is the greatest gratification.”

The exhibit is organized by the Pechersky Family Foundation in collaboration with Galleria Poggiali and Fondazione Terre Medicee. 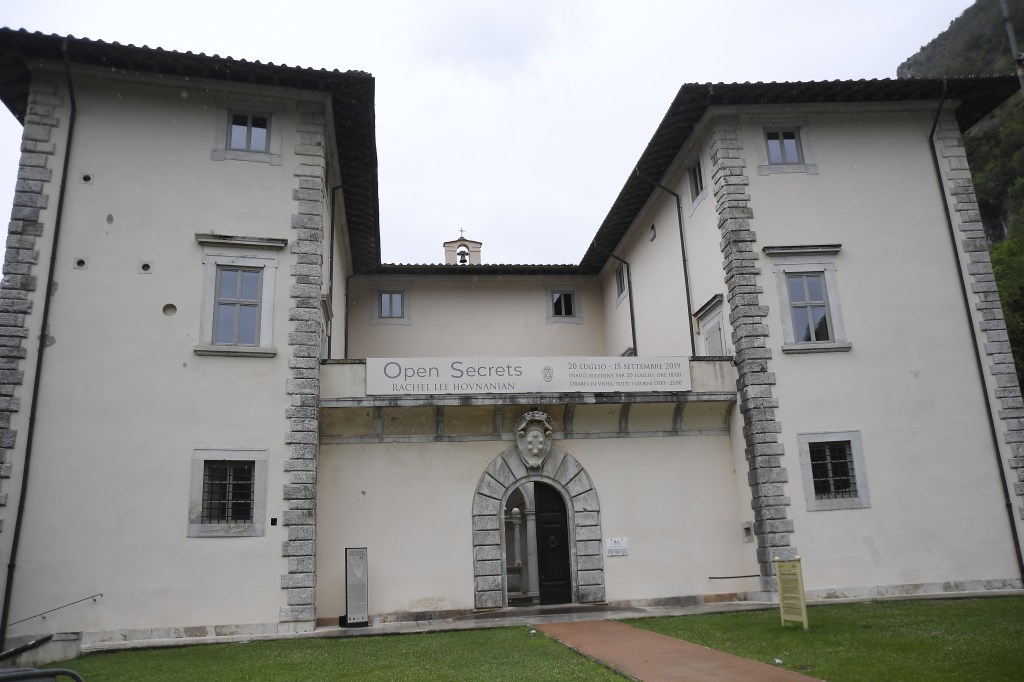