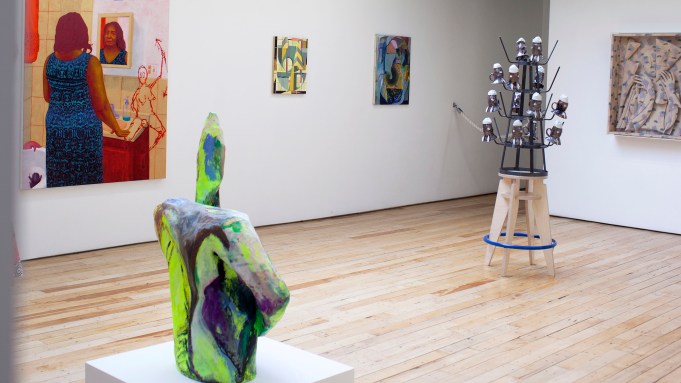 Rachel Uffner is celebrating the 10th anniversary of her eponymous Lower East Side gallery on Suffolk Street. To mark the milestone, the gallery has organized a group show on its second floor, featuring new — or previously unseen — work by the 16 artists it represents.

“I think it shows a lot changes in 10 years, or all the time — year to year, month to month. And I feel like I’ve grown and learned a lot more also,” says Uffner, her small 11-year-old dog quietly pattering around the sky-lit room. “A number of the artists have been with the gallery for all of 10 years, and then others were added on a few years in, or even a number of them have just been showing with the gallery a year. I think it’s also a good way for me to evaluate and for other people to maybe see how things have evolved.”

One of those artists is Sara Greenberger Rafferty, who has a concurrent solo show on the gallery’s first floor; another is Roger White, who was the gallery’s first show back in 2008, at their former location on Orchard Street. Uffner, who grew up outside of Philadelphia, opened her gallery after working at the now-defunct D’Amelio Terras gallery in Chelsea for five years; she leveraged the artist relationships she had formed there to launch on her own.

“Lately I’ve been thinking about why I even do this,” she says. “And I think it’s just this general interest in beauty, which can come in so many different forms: It can be ugly, it can be disturbing, it can be purely beautiful. I think beauty to me, and a lot of my colleagues, too, is also seeing something that is new or pushing things a bit forward. I have a strong interest in things that are beautiful but seem really innovative also.”

Uffner notes that as the gallery hits its first decade, she’s also reflected on the importance of sustaining a platform for diverse and emerging voices within the art community.

“No one is making me do this, but I do start to feel a bit of responsibility to continue — also because a lot of my colleagues have closed, and I do feel like it’s really important to have strong voices from each generation,” she says. “So I kind of feel propelled to go on, even if people like it, people don’t like it — I think it’s just important to have different voices out there,” she continues. “What’s nice, too, is that the longer I’ve had the gallery, especially the artists I’ve started working with where this is their first show, I love that I can give them more of a platform than I could 10 years ago because I was just as new as them.”

“Not many people knew she made work, and I saw a piece of hers at an art fair and then we started to talk,” says Uffner, who last year presented Sally’s first solo exhibition in New York. “She had a solo show here actually at the same time that Peter had one at Mary Boone, and everybody was so excited to see Sally’s work. And her’s got all the press and the reviews, because nobody knew [about her work].”

The gallery also reflects a very female-forward vision; unintentionally, many of the artists the gallery represents identify as female. “I think I’ve gotten known a bit for showing a lot of female artists. I’ve had booths of all female artists at art fairs and I wouldn’t realize until I was there, because it wasn’t something I’d factor in,” she says.

As for the gallery’s vision moving forward, Uffner speaks to a desire to continue supporting the current artists in the roster both in New York and for shows in other cities, producing companion books for shows, as well as growing the gallery’s network and always staying open to adding new voices.

“I think as I do this longer, I become more confident. There’s still setbacks that you get, but you get more confidence, and when I read more and more articles or interviews with art dealers that I admire, you realize that it really is so much about trusting your eye,” Uffner says. “Which is a really hard thing to do. But at a certain point if it’s working to a certain extent, if people like what you’re doing, you realize ‘OK, well, maybe I know what I’m doing.'”