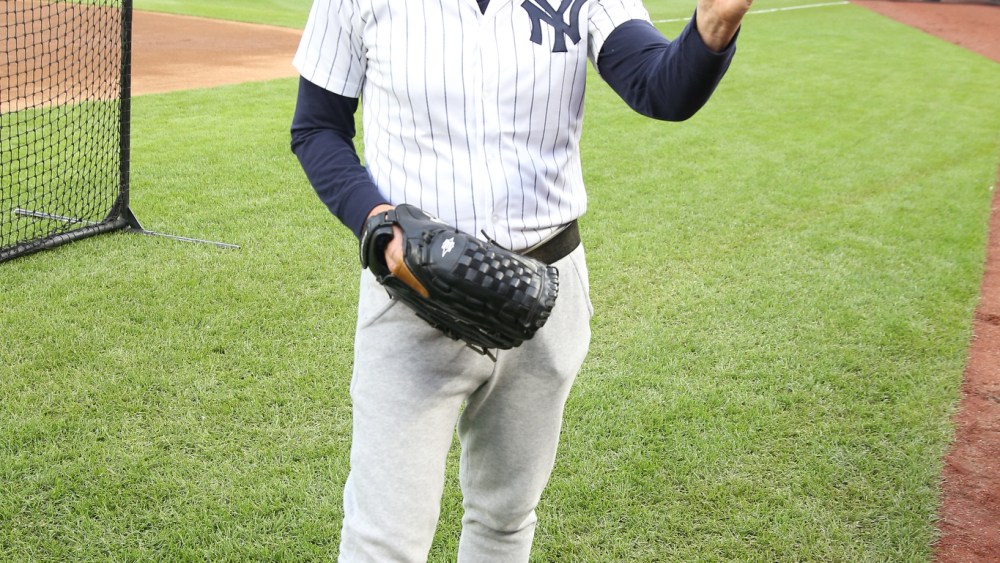 David Lauren had one piece of advice for his father Thursday night as they drove to Yankee Stadium in the Bronx, N.Y., and the designer prepared to throw out the ceremonial first pitch before the team squared off against their biggest rivals, the Boston Red Sox.

“Don’t think about being Ralph Lauren,” David Lauren told him. “Think about being a 10-year-old kid playing stickball in the street and the Yankees came up to you to ask you to throw out the first pitch.”

Whether he was able to block out the crowd, the lights and the noise wasn’t clear, but as he strode to the mound with ball in hand, his beaming face was certainly reminiscent of a little kid fulfilling a lifelong dream.

“This is a dream come true for him and for me,” David said.

“I’ve been everywhere and I’ve spoken in front of presidents. But this is probably the most exciting moment ever for me,” Ralph Lauren said in the Yankees dugout before the game as he prepared for his big moment, which was to mark another big moment: The 50th anniversary of the iconic American fashion brand that bears his name.

“Hopefully it’s a quick moment throwing out the ball and I won’t embarrass my family,” Lauren added jokingly.

He didn’t — he threw from the mound and although the pitch was in the dirt, he reached the plate and catcher Gary Sanchez scooped it up effortlessly.

“I’d like to do it again,” he said after the fact. “I feel it could have been a little higher.”

Perhaps, but his preparation apparently paid off. To get ready, Lauren worked for weeks with a personal trainer and also got some advice from former Yankees hurler David Cone. And before the stadium opened to the public, he also got up close and personal with famed Yankees slugger Reggie Jackson for a couple of last-minute pointers.

Dressed in a Yankees jersey with Joe DiMaggio’s retired number 5 on the back — “a pinstripe classic with a Polo player underneath,” he said — and “my old sweatpants,” and donning a Yankees cap he designed especially for the occasion, the designer also wore a glove and clutched a ball as he got ready.

Lauren said he’d been speaking to the Yankees for a while about doing something together, and commemorating his 50th anniversary seemed like the perfect time.

“I’ve always wanted to do a Yankee glove, a real glove,” he said.

So he designed a Ralph 50th logo Wilson leather mitt as part of a limited-edition Polo x Yankees commemorative collaboration along with a New Era and “RL 50” logo hat, a Rawlings baseball with a pony logo, and an embroidered Ralph Lauren satin baseball jacket.

For the kid in him, Lauren said he always felt ready to go when he suited up — and that included Thursday night.

“As soon as I put my uniform on, I was a ballplayer. I had a new life,” he said.

The 78-year-old designer, who grew up on Mosholu Parkway in the Bronx and has been a lifelong Yankee fan, said he had dreamed of being a ballplayer growing up.

“I’d imagine every time I got up to the plate that I was Joe DiMaggio or Mickey Mantle,” he said. “The way they stood, the way they handled themselves, they were very inspirational to me, and of course, playing sports, you’re always wearing sneakers and running shoes, it’s a lifestyle.” And so it was almost surreal for him “being in Yankee Stadium where Babe Ruth and Joe DiMaggio were.”

He said DiMaggio was his favorite growing up and he also liked Mantle, both center fielders — and as a center fielder himself, he always sought to emulate his heroes. Because he’s a lefty, he was limited on what positions he could play, but that was OK because “center field is where Mickey and Joe were,” he said.

Although the stadium has been rebuilt and the players are different, the experience of seeing his favorite team play never gets old.

That was evident in a pregame video that was shown on the Jumbotron before the first pitch. Lauren, surrounded by his wife Ricky; children David, Andrew and Dylan, and siblings, watched as the narrator chronicled his journey from a kid growing up on the streets of the Bronx to “an American fashion icon.”

It told how he loved playing baseball and sat high in the bleachers to watch the Yankees and enjoyed “the unforgettable feeling of singing ‘Take Me Out to the Ballgame.’”

The video also touched on Lauren’s philanthropic side — the cancer center he built in Harlem — and his restoration of the Star Spangled Banner flag at the Smithsonian.

He presented Yankees manager Aaron Boone with a limited-edition Ralph Lauren 50th jersey and accepted a Yankees pinstripe uniform top with a 50 on it to commemorate his anniversary.

So how did the experience compare to his big 50th anniversary show in Central Park with its star-studded guest list? “I had a great show and it was very well received,” he said. “It was very emotional and this is right up the same alley. It’s a one-two punch.”