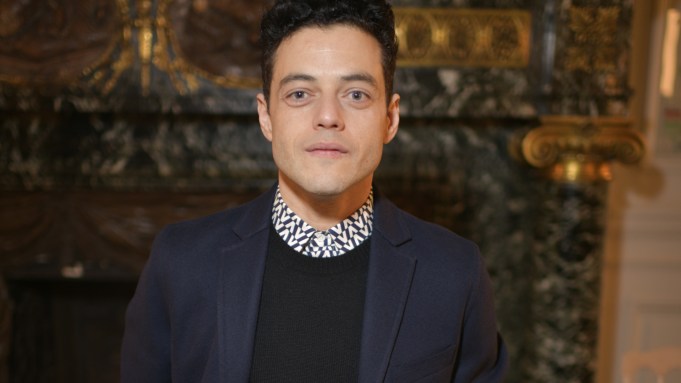 OLD FRIENDS: British-American actress Lucy Boynton found a surprise waiting for her at the Valentino Couture spring 2019 show on Wednesday.

“You’re here? You’re really here?” she squealed upon discovering that her “Bohemian Rhapsody” costar Rami Malek, who played Freddie Mercury to her Mary Austin, was also in attendance.

The two actors, who are rumored to be dating, reminisced about the moment they learned about the film’s nominations for the next Oscars ceremony, which will be held on Feb. 24. “Bohemian Rhapsody” appears in five categories, including “Best Film” and “Best Lead Actor” for Malek.

“I was actually at the hair salon when I found out,” said Boynton, whose next project is Ryan Murphy’s new Netflix show “The Politician.” “My colorist and I were both eagerly refreshing the live footage on YouTube, watching the information coming in. It was very stressful.”

The moment was a lot more peaceful for Malek. “I was right here in Paris,” the actor said. “It was snowing outside and it was ethereal. I thought I was in a magical wonderland.”

Malek was just about to take his place at the photo call when a figure jumped out in front of the photographers.

“Wait!” intoned film director Luca Guadagnino, stooping down to fix one of Malek’s trouser hems, making sure it fell perfectly over his lace-up leather boots.

Ever the perfectionist, Guadagnino, who directed “Call Me By Your Name,” “A Bigger Splash” and “Suspiria,” assured he goes into all his projects with the same passion.

“Whether doing a film for fashion or a film for cinema, I only ever do things that make me happy,” said the director, who has recently collaborated with Valentino on a fashion film.

On the upper level of the Hôtel Potocki, an impressive number of fashion designers were patiently waiting to discover Pierpaolo Piccioli’s latest couture collection. Giambattista Valli, Clare Waight Keller, Raf Simons and Valentino Garavani himself were spotted among the rows of gilded seats. Garavani was in good company, flanked by director Sofia Coppola on one side and Céline Dion on the other.

After the show, closed by Naomi Campbell in a voluminous chocolate-colored organdy and organza gown, guests got to their feet, some of them wiping tears from their eyes.

“Pierpaolo is absolutely extraordinary,” said British actress Kristin Scott Thomas, who was sporting a signature red Valentino ensemble. “The dresses were beautiful. They were so magical that I wonder — can you even actually call them dresses?”