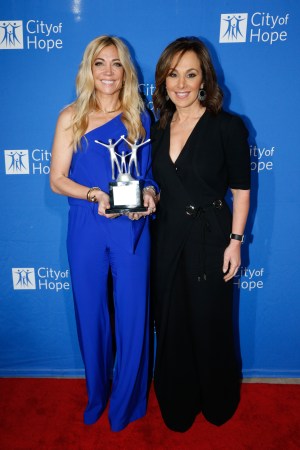 The presenters were Hoda Kotb of NBC’s “Today” show, Rosanna Scotto of “Good Day New York,” and Dr. Jill Biden. Some 450 women attended the luncheon at The Plaza Hotel, which raised more than $400,000 for the City of Hope, the comprehensive cancer center in Pasadena, Calif. About 100 million people benefit from City of Hope’s research a year.

In presenting the award to Weingarten, Kotb said that if you’ve ever been to a nail salon, you know Essie. She said that Weingarten was born with a gift because she knew at a young age that she loved color. As a young woman Weingarten loaded up 12 different nail polishes and headed to Las Vegas and started selling door to door. Today, she oversees a company that produces more than 1,000 nail polish colors and makes up their names as well, such as Ballet Slippers, Wicked and Berry Naughty. She said one of her finest moments occurred when the Queen of England’s stylist called up Essie’s people and said, “Your Royal Highness loves Ballet Slippers.”

Weingarten said when she originally decided to go out on her own with her nail color business, her mother told her she can try it for a year, and if it doesn’t work out, she can come back to the family business. She told the audience that her sister is suffering from pancreatic cancer, the same disease that killed her father and that’s what motivated her to accept the honor. “We must eradicate pancreatic cancer,” said Weingarten.

Knowing that the fashion crowd would be out in full force on Monday, Scotto said she put on three pairs of Spanx. “I’m wearing Ramy Brook and it’s timelessly sexy and sophisticated. It’s a major line that’s in every department store. After lunch go to Bergdorf Goodman, Saks or her downtown store. She’s going to be huge and the prices will be going up,” said Scotto.

“I’m so excited I get to spread the word of the incredible work that City of Hope does,” said Sharp, who showed 30 looks from her spring Ramy Brook contemporary collection on the runway. For sales of these items at her own store, ramybrook.com and Saks Fifth Avenue, the company will donate a percentage of proceeds to City of Hope.

Biden said she was pleased to be at the event “to recognize all of the fighters and survivors of breast cancer who are here today.” She said that City of Hope treats not only the physical needs of their patients, but their emotional needs as well.

Lee, who is a breast cancer survivor and advocate, took her story to social media and posted throughout her treatment. She said that she hopes her story will inspire and help other people. “That is why we’re here today, to find a cure and communicate,” she said.