Heartthrob Rapper G-Eazy on Designer Duds, Getting Personal and Acting 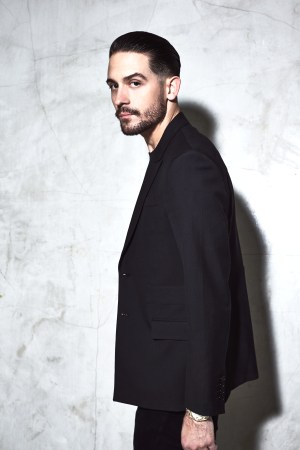 Naturally, what the fashion set notices first about rapper G-Eazy, whose given name is Gerald Earl Gillum, are his model-good looks and matching sartorial style (he’s partial to Comme des Garçons sneakers and Givenchy blazers to accessorize his mainstay black t-shirt and skinny jeans). At nearly 6’4″, with a slender frame that’s more graceful than lanky, he clearly made-for-print-and-digital material.

“Man, I feel sort of silly doing this,” he protested at his WWD shoot, when a photographer asks him to give his best catwalk and pivot. But by the third try, he’s flipping his jacket tails and cocking his head just so, and even cracking an amused smile.

It’s not as if he didn’t come prepared with multiple outfits and his ever-present personal camera crew, there to capture every moment for his carefully curated social media channels. But he’s also still a down-to-earth 26 year old from Oakland, Calif, who smiles shyly and extends his hand with “Hi, I’m Gerald,” once he’s done posing and ready to settle onto a couch for the interview.

Gillum has been on the road since the December 2015 release of his second album for RCA, “When It’s Dark Out.” He’s done Australia and Europe, and has just landed Stateside for his first gig at Coachella, to be followed by the second leg of his North American tour, a month in Europe and summer tour Stateside. (It’s no surprise, that about 80 percent of the audience at his sold out shows is female, according to his handler.)

Anyone’s who’s heard his single “Me, Myself & I,” which is in heavy rotation on the hip-hop and R&B airwaves, knows his musical style is equally appealing, merging rap with R&B sounds, a shrewd move intended to increase his crossover appeal and position him for a broader audience.

But it’s also a very personal album. “I opened up more, it became a really honest vulnerable record especially the second half of the album. I just felt like that’s the power of music; it can be an outlet for the artist and lets the audience into your world so they can identify with the stories you are telling, whether they’ve been there or not.” In one track, Gillum shared what it was like to find his mother’s partner Melissa Mills dead from a drug overdose related to a manic depressive disorder.

But he says there’s also a feel-good rush of adrenaline each time he performs. “The energy the crowd gives me gets me through any show no matter how tired I am. Like when I get on stage it’s like I black out, I blink and the show is over, it just zips by. After the show is a different story, I’m like, collapsed backstage and barely able to move, but the feeling of being on stage and how long the journey has been…I’m wanting to appreciate every little moment right now.”

Gillum started making beats and recording songs at age 14, but he traveled a traditional path of earning a scholarship to Loyola University at New Orleans, where he studied the music business program. “I’m not a classically trained musician but I’ve always had a hustle, I’ve always had this independent entrepreneurial spirit, so being down there and meeting other kids my age with that same kind of mind-set was dope,” he said. Two of his college friends would go on to found the music management firm that still reps him today, along with Guy Oseary’s Maverick, which has evolved from an entertainment company to a multidisciplinary management group.

“I think even in music it’s helpful to have a great coach, a team of people with wisdom and experience with the sort of artists I grew up listening to, like to T.I., Lil Wayne, Nicki Minaj, Drake. My [artists and repertoire representative] who’s with me in studio every day was in that same seat with Biggie making ‘Ready to Die’ so I feel inspired and motivated being around them,” he says.

Today, Gillum lives in L.A. “in a big empty house.” Of the trappings of success including being able to buy the designer clothes he coveted as a teen, he says, “Now for the first time in my life I have money, so the stuff I always thought was cool I can afford, but it’ll never take a front seat to music.”

What might eventually compete for his attention is acting. He recently starred in the short film “Tunnel Vision,” which is currently on the festival circuit. “It was crazy, a whole new experience. I literally had zero experience acting. [The producers] reached out to me because the film is about a hip-hop promoter from the Bay Area.” He continues, “I just felt like it was the right opportunity knocking on the door. We’d always talked about acting as a potential possibility down the line, like ‘Acting, why not?’ But I wanted to establish myself in music first because this is what I truly love. But going there, I fell in love with it. I would definitely try it again.”

Because rap is spontaneous, Gillum tries to strike a balance between his art and his careful image and career management. “Whenever an idea for a song or lyrics hits me, I write it down, but I like being in the studio when that moment of inspiration hits and you’re able to record that idea on the spot when it’s the best and the most raw. A lot of it is intuitive. It can’t be too thought out or it becomes forced.”