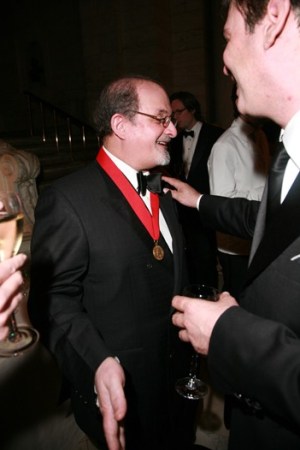 “I come every year,” said Walters. “Anything that promotes reading is exceptional.”

Nearby, Christine Baranski admitted to being quite a bookworm. In addition to Francine du Plessix Gray’s “Madame de Staël” and David Lebedoff’s “The Same Man,” the actress is currently rereading “The Portrait of a Lady” with her 21-year-old daughter.

Rushdie also makes his way through plenty of pages — though not typically in the NYPL’s hallowed halls. “I’m very bad at actually reading in libraries,” he smiled. “The sight of all these people working hard makes me want to behave badly.”

The hostess caught up with old friend Streep. “I know her woman-to-woman,” said Karan in her trademark New Age speak. “I’ve followed her on that journey.”

Translated into English, Streep explained the two made each other’s acquaintance in 1996, when Karan dressed her for the Oscars. “The dress came wrinkled, so I put it in the shower [to steam it],” recalled Streep, who was nominated that year for best actress in “The Bridges of Madison County.” “It grew about four feet.”

Over in Chelsea at the Metropolitan Pavilion, Alec Baldwin joined co-chairs Richard Gere and his wife Carey Lowell at the 14th annual ArtWalk NY bash, which benefits the Coalition for the Homeless and this year honored the late Robert Rauschenberg. A crowd of art bigwigs like Chuck Close, Agnes Gund and Andrea and Marc Glimcher mingled with the slew of guests bidding on the silent and live auction items, including works by Louise Bourgeois, Terence Koh and William Wegman. Even Baldwin got in on the action, putting an offer on a piece that featured Mexican wrestlers. “My daughter and I love ‘Nacho Libre,’” he said by way of explanation. “And it has ‘luchadores.’”