Making it through Wednesday night's social scene, which included the ABT gala, The Boys Club dinner and cocktails for New Yorkers for Children. 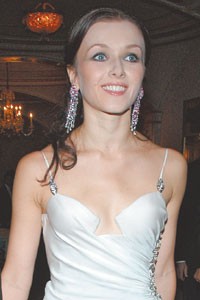 NEW YORK — How did one make it through Wednesday night’s jam-packed social scene, which included the American Ballet Theatre Gala, the Boys’ Club of New York dinner and cocktails for New Yorkers for Children, just to name a few?

“I used to wonder who on earth drinks from those 20-ounce Starbucks cups. Now I know. Mothers with twins and people on this scene,” added Potter Aston, who can claim both honors.

Meanwhile, at the Akris store, the junior set of Alexis Bryan, Zani Gugelmann and Tinsley Mortimer passed by for a Vogue-sponsored event for New Yorkers for Children. Holly Dunlap was joined at the hip to two employees of her company, Hollywould. They were all wearing her designs and all looked remarkably similar. “We’re Destiny’s Child,” Dunlap offered. “I’m Beyoncé.” Of course she was.

“I’m on my way to the ‘Battle of the Sexes’ event that Theory’s hosting at Scoop,” said Mortimer. I think I may be battling Donny Deutsch.”

Well, neither of those two needs any caffeine.

Although the evening’s sprint began uptown, by its end, the social set had dispersed to parties all across the city’s grid.

Blair Husain, Serena Boardman and Elizabeth Lindemann partied at Cipriani 23rd Street to benefit the Boys’ Club of New York. There the dancing began before dinner was even served. Jennifer Creel boogied as the band — a group of spirited youths from the Boys’ Club — played Motown hits. Helen Schifter was as fueled by her drink, a martini, as she was by the beat. “I can drink a lot, but I can eat a lot, too,” she grinned. Dayssi Olarte de Kanavos tried, unsuccessfully, to lure Robert Burke to the dance floor, but fortunately Valentino president Graziano de Boni gallantly stepped in (Valentino and de Grisogono sponsored the event). “Did you see how charged they were?” Kanavos asked, referring to the band. “They are going to remember this for the rest of their lives.”

This story first appeared in the October 21, 2005 issue of WWD. Subscribe Today.

Downtown at Scoop, in the Meatpacking District, the scene was raucous. The Sugar Hill Gang performed, while Mortimer, Theory’s Andrew Rosen and Stefani Greenfield chatted with the crowd. A more intimate dinner followed at nearby Macelleria.

Earlier in the day, Fabiola Beracasa, Mortimer (again) and Emilia Fanjul Pfeifler hosted a luncheon at the Hotel Plaza Athénée for designer Jo Charnuis. Husain and Boardman sat for a quick bite of roast chicken and a fashion show, and then were off as the crème brûlée was being served. But Beracasa wasn’t moving. “The skinny girls can go,” she said with a flourish as she dug into her own dish.

Not all the action has been in New York recently. Last week in San Francisco, Dede Wilsey swept into the opening-night gala of the new de Young Museum in a cloud of Oscar de la Renta pistachio tulle. “Can I take a photo of my daughter in the museum?” her mother, Ruth Buchanan, asked, whipping out her digital camera.

“Dede raised $190 million to build the museum, so you can probably do whatever you like,” replied Wilsey’s son, Trevor Traina. Admiring the building, designed by Swiss architects Herzog & de Meuron, were Mayor Gavin Newsom, Vanessa and Billy Getty, Jacqui Getty, Alexis and Claiborne Swanson, OJ Shansby and Katya Sorokko. Tatiana Sorokko made a beeline for the costume department, where there was a bugle-beaded Vionnet dress from 1924 (a gift from Wilsey) and a stunning gold-sequined Norman Norell minidress from 1965. “Right up front is the Issey Miyake ribbon dress, the same as one in my collection,” Sorokko said proudly.