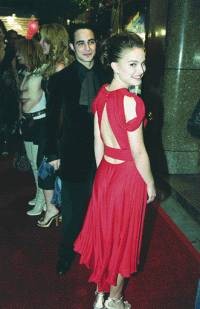 Guess you had to be there. Though guests who packed Radio City Music Hall Tuesday night for the VH1/Vogue Fashion Awards had a fine time, for those at home, the live show’s high-voltage, high-volume escapades didn’t translate. There was too much awkward banter. The fashion shows looked chaotic, and many questions remained. Did Heidi Klum and Tyra Banks really perform a bosom-to-bosom bump? Why couldn’t P. Diddy learn to pronounce Ralph’s name? (It’s LAW-ren, not La-WREN). What was J.Lo dressed as, a bobby-soxer? And couldn’t somebody have booked a cute boy band like The Strokes?

But from the theater’s velvet seats it all seemed to make perfect sense — we swear. And after years of being held captive during the previously interminable awards show, the fashion crowd had a fun night coming.

It could have run on sheer star power.

“I didn’t know you would be here,” Claire Danes called to Natalie Portman as she swept past. “Now I can pelt you with spitballs from across the aisle.”

In the center of the floor, there was Christina Ricci on the arm of Alexander McQueen, Cate Blanchett looking every inch the tousled sex kitten in Tom Ford’s Yves Saint Laurent, Calvin Klein, Naomi Campbell, Aerin Lauder, Carolyn Murphy, Eve. It was enough to give Amanda Peet, who elaborated on nominee Marc Jacobs’ finer attributes live for the camera, a serious jolt of stage fright.

“Look at this place,” she said. “Getting up there makes you feel like someone with Tourette’s in church.”

But when David Bowie took to the stage to sing “Rebel Rebel,” fashion lovers one and all swooned, an experience with which Bowie himself is familiar.

“I fainted here in 1973,” he said. “But I don’t remember it.” Bowie wouldn’t be the only one taking home surreal recollections. Backstage, things got a little strange.

A reporter asked J.Lo if she was wearing her fragrance Glow, leaned over to sniff her — and declared she couldn’t smell it. Then a man claiming to be a CAA agent snuck into the press room and offered her a movie on the spot, as her handler whisked her away. And the horrible outfit?

“This is my ‘Bonnie and Clyde’ look,” she explained. “I thought about wearing my JLo sweatsuit tonight to accept the award, but I wore it all day.” She should have stuck to the sweats.

Meanwhile, Brittany Murphy took the whole Vogue association to the extreme, striking one pose then another, then another for the cameras.

“I’ve been doing this since I was two years old,” she said. No one could stop her.

Then Klum and Banks reappeared after their onstage collision.

“I looked like a midget next to you Tyra, it’s not fair!” Klum complained.

But the statuette, redesigned and sprouting a pair of shapely legs, proved more provocative. Steven Tyler called it an S&M Barbie, while Hugh Grant announced that receiving one left him “semi-aroused.”

The award’s designer, Vanessa Beecroft, claimed she fashioned the statuette after her yoga instructor, but for her part, Karolina Kurkova, who won the Model of the Year, took all the credit.

“They copied my legs for the award,” she told anyone who would listen. “Spaghetti legs!”

Model of the Year Award:

Designer of the Year Award:

“Fell in Love with a Girl”