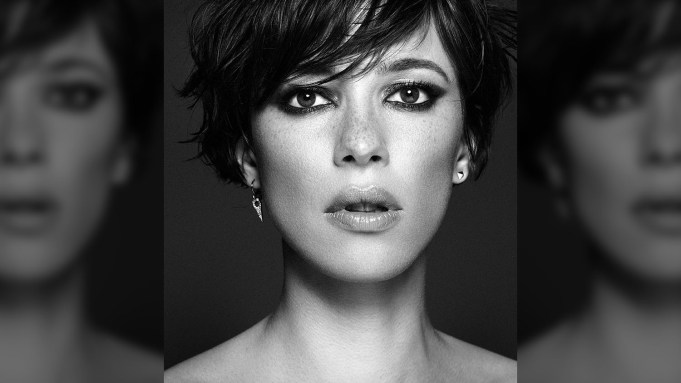 Actress Rebecca Hall doesn’t need anyone’s approval to speak her mind. In fact, when one meets Hall, who recently sounded off on Instagram about working with embattled director Woody Allen, it’s obvious she’s far more confident than her character Anna in “Permission,” opening today, who nonetheless tells her longtime partner she wants to open their relationship to other people. For the record, Hall says she has no interest in that kind of arrangement.

Perfect Anna and Will (Dan Stevens) have above-average good looks, a spacious urban apartment and an easy, comfortable rapport. They have fun together, and they have sex, although not necessarily at the same time. Ironically, it’s Anna’s friend Reece, played by Hall’s husband, Morgan Spector, who suggests she “sleep around” before her inevitable marriage to Will. Anna proposes opening their relationship as a sexual experiment, and Will reluctantly agrees.

“Permission” is no morality tale. The film has the imprint of a woman. It’s no coincidence that Hall also served as a producer and was determined not to treat lapses in monogamy in typical putative Hollywood fashion.

“Brian Crano, the writer and director, is one of my oldest friends. It’s lighthearted and based on familiar women with sexual agency, but they’re not psychotic – they’re not bunny boilers,” Hall says, referring to the classic “Fatal Attraction” scene where Glenn Close plays a spurned lover who kills her former paramour’s family pet.

Still, the fact that Hall has to qualify sexual agency with the disclaimer that Anna, a woman in command of her libido, isn’t a crazed stalker is a telling remark, especially when taken in the context of today’s complex sexual politics.

Hall’s relationship with the #MeToo movement has more than 50 subtle gradations of gray. While the actress credited Allen for casting her in his 2008 film “Vicky Cristina Barcelona” when she was a lesser-known commodity, Hall says she felt compelled to publicly apologize for working with him a second time on the upcoming “A Rainy Day in New York.”

“After reading and re-reading Dylan Farrow’s statements of a few days ago and going back and reading the older ones, I see not only how complicated this matter is, but that my actions have made another woman feel silenced and dismissed,” Hall wrote in an Instagram message last month.

“I felt moved to do something,” she tells WWD. “It can only help if women feel empowered to speak up in ways they haven’t been before. [Woody Allen’s] case is incredibly complex and a deeply sad one. I don’t think every person who worked with Woody Allen should speak. I know what I was compelled to do. I hope there are lessons learned for all the studios.”

Asked about the prospects for women in Hollywood, Hall says, “There’s not enough good roles for women.  I’ve been fortunate and played lots of good roles. The means of equal opportunity, a lot comes down to the nature of market forces.”

But Hall, who was raised in London and the English countryside, came to acting with a strong pedigree. Her father, Peter Hall, was the legendary stage director and founder of the Royal Shakespeare Company (he died last September) and her mother, Maria Ewing, an opera singer. “When you grow up in that environment, it’s not that exotic,” she says. “I realized I wasn’t going to be good at anything else.”

On the verge of motherhood and glowing with anticipation and progesterone, Hall doesn’t look noticeably pregnant. “This is a Prada dress,” she says. “They were kind enough to let it out a little.”
The actress says she’s ready for some domesticity. “I’ve been living here on and off for 10 years and full time for four. I’ve been married for four years,” she says, wryly explaining that she met Spector on Broadway when both were in Atlantic Theater Company’s “Animal,” about a woman who gets tired of caring for her husband’s mother and commits elder abuse, when she actually has post-partum psychosis and is taking care of her infant child.

Compared to “Animal,” “Permission’s” issues are relatively tame. “What if they’re the type of people that need to be in an open relationship?” Hall says of Anna and Will. “He’s not in tune with his needs and Anna is not honest about what she wants. Being in a relationship and having the perfect house won’t make you happy. At the end of the movie, she walks off in the distance and a man hasn’t saved her, and she’s happy.”