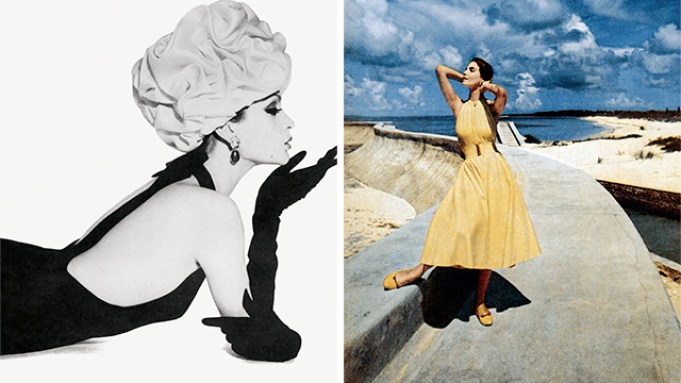 After the death in 2011 of her father, fashion photographer Gleb Derujinsky, Andrea Derujinsky went to his home in Durango, Colo., and discovered that he’d been working on a book.

“I grew up knowing dad was a photographer, and spent a whole lifetime watching him take pictures, along with the million other interesting things that he did,” said Derujinsky. “I said, to myself, ‘OK, I’ll pick up where you left off.’”

That was easier said than done. Derujinsky couldn’t locate any of the hi-res images, and had to buy vintage magazines from paper dealers along with the few negatives the publications he worked for had saved. Michael Gross, who was approached about writing the book’s copy, was in the midst of another project and declined. So Derujinsky wrote it herself.

She had to identify the clothes the models were wearing and where the photographs were taken. “I spent hours researching where these places were,” she said. “Most of this took place before I was born, which was in 1961. It was at the height of the couture lifestyle of glamor, adventure, architecture and art.”

The enterprise was fraught with emotion. Gleb was 86 when he and his wife, Wallis, were killed instantaneously in a car accident. “How do you to turn something so incredibly sad into something amazing,” Derujinsky said. “It took almost a year for me to sign a contract with [publisher] Flammarion.”

“Capturing Fashion: Derujinsky,” which will be published later this month and distributed by Rizzoli, highlights Gleb’s work in lifestyle magazines, especially Harper’s Bazaar, from the Fifties to the Seventies. The late model agency mogul Eileen Ford wrote the book’s foreword.

“The book is everything my dad deserves,” his daughter said. “He deserves to be seen and talked about and studied and admired — all the things I never did as a little girl.”

Derujinsky may be excused for not appreciating her father’s work when she was a child. Gleb traveled around the world photographing models wearing beautiful clothes in exotic locations. He was fearless in other aspects of his life, racing in 1954 and 1955 cars sponsored by Ferrari America.

Gleb worked with fashion’s holy triumverate at Harper’s Bazaar — editor Carmel Snow, fashion editor Diana Vreeland and creative director Alexey Brodovitch. He competed with Richard Avedon for plum assignments, convincing Vreeland that he needed to shoot models in the sands of some far off desert. He made the decision to shoot his subjects in “the documentary style,” concluding that “real people are never boring.”

Taking to heart Vreeland’s advice that “the eye needs to wander,” Gleb took models out of the studio and photographed them with breathtaking scenery. There’s an image of Derujinsky’s mother, Ruth Neumann, in Bangkok, framed by the pillars of the Temple of Dawn and another with the Jama Masjid, one of India’s largest mosques, in the distance.

Gleb in 1957 photographed Carmen Dell’Orefice at night on the banks of the Seine with Notre Dame across the river. The same year, he  shot Dell’Orefice and Neumann at Les Halles restaurant wearing Balmain and Madam Gres, respectively. He juxtaposed in 1959 a model wearing a black velvet evening coat with boxers at New York’s Stillman’s Gym, where Joe Louis, Rocky Marciano and Sugar Ray Robinson trained.

The lengths Gleb would go to for a photo included trekking to the top of a mountain in Turkey and shooting amid the natural sculptures of Monument Valley. “Avedon shot dresses and clothes and Gleb shot women living in them,” said Bruce Clerke, Harper’s Bazaar fashion assistant editor.

Models such as Nena Von Schlebrugge, who is Uma Thurman’s mother, became family, Derujinsky said, adding, “I thought of them as regular people. That kept me grounded. I still go to lunch with Tippi Hedren and other models.”

Neumann continued modeling for Gleb until around 1964, their daughter said. “He left mom in 1968 and we moved to the West Indies with my mother for three years,” she added. “Dad moved from New York to California with my stepmother. Then he moved to Durango. He was always so absorbed with whatever project he was working on.”

For a while, Derujinsky lived in Los Angeles, where he made TV commercials. In Durango, he opened a jewelry studio and for 20 years designed jewelry and innovative bicycles. At age 50, he became a gliding instructor.

“Dad never went anywhere without his camera. He never stopped working. It’s important for me to make sure that my dad doesn’t get overlooked,” said Derujinsky, who’s working on another book with more of Gleb’s photographs. “‘Capturing Fashion’ is the most fulfilling thing I’ve ever done. I imagine this is what I’ll do for the rest of my life.”