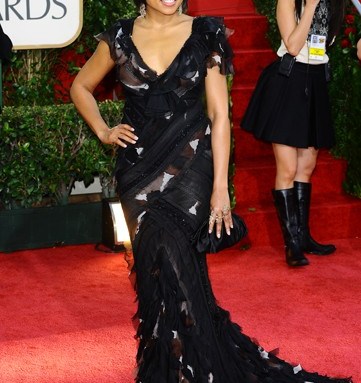 BEVERLY HILLS — The players are set for the red carpet’s main event.

First-time nominee Hathaway is a rising star, having scored on several best-dressed lists for her red Marchesa gown at last year’s Oscars, and throughout her “Devil Wears Prada” and “Rachel Getting Married” press tours.

Her stylist, Rachel Zoe, has access to top design houses. Hathaway has worn almost every designer from Valentino to Marc Jacobs over the past few seasons.

Zoe said Thursday she is again meeting with the star today “for her SAG Awards fitting, so we’ll talk more about Oscars….It will come down to the couture, the New York collection and what people want to custom make.

“At the end of the day, we want glamour, and Oscars is always that ultimate fantasy Cinderella moment,” she said. “I or my clients never get our heads stuck on one idea, because you can have an idea, and then all of a sudden a dress shows up that is completely contrary to what you wanted, but it’s perfect and it ends up being the one.”

Jolie’s tastes are more predictable — streamlined Atelier Versace and vintage in monochromatic colors. Her stylist, Jennifer Rade, isn’t a fashion snob, however, so her choices are sometimes unpredictable, such as the simple Grecian gown by David Meister that Jolie wore to the awards in 2003.

Winslet, believed by many in Hollywood to be the front-runner for best actress when the 81st annual awards are handed out Feb. 22, also sticks to a predictable silhouette that flatters her figure, a body-hugging bodice and A-line gown, typically in strong solid colors or black or white. She went safe at the Golden Globes this month in a black strapless Yves Saint Laurent gown, so look for her to break out with a “special” dress for the big day, as stylist Jessica Diehl will likely build momentum throughout awards season.

Melissa Leo, a nominee for the little-publicized “Frozen River,” will receive the least attention on the red carpet, since she’s more actor than fashionista. She was seen at the Sundance Film Festival this week making her way around Park City, Utah, in jeans and a down vest.

The best supporting actress category again boasts fashion and Hollywood darling Amy Adams, who wore Carolina Herrera when she was nominated for “Junebug” two years ago, and Proenza Schouler last year. In between, Adams has worn Yves Saint Laurent, Zac Posen and Chanel, among others.

Though the roster of designers is varied, the petite actress, styled by Cristina Ehrlich, prefers to stick to body-conscious solid colors that flatter her frame. She’s not afraid of color, choosing purple, electric blue and teal for past red carpets.

Cruz tends to go with European couture or Oscar de la Renta on important occasions. Both are favorites of Ehrlich, her stylist. Last year she wore Chanel Couture, the year before Atelier Versace and the year before that custom-made de la Renta.

“Penélope exudes classic, European elegance, but her style is, at the same time, simple and unstudied,” Ehrlich said.

More unpredictable is Marisa Tomei, nominated for the third time (she’s won once).

Tomei, a New Yorker and fashion risk-taker, can wear edgy styles by Giambattista Valli and YSL with aplomb, and can also make de la Renta look funky, as she did at the Golden Globes.

Two acting vets who are first-time nominees are Viola Davis and Taraji P. Henson. Both have not yet found enough red-carpet clout to command custom dresses from top designers, but that will surely change in the coming weeks. For her part, Henson is not afraid of color and prints, as she has demonstrated in looks from Kevan Hall and Kaufmann Franco. Davis has so far played it safe in black Giorgio Armani.