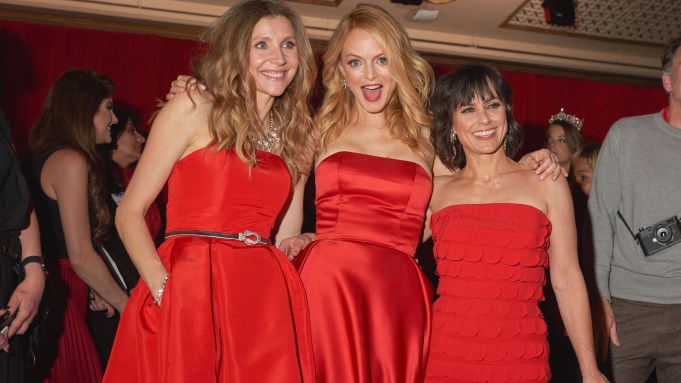 NEW YORK — The dressing room of the Hammerstein Ballroom was flooded with a sea of ball gowns, scarves and other accessories in various shades of crimson. Men wore ties with touches of ruby or scarlet. Actress Jennifer Tilly had on a lacy red bra peeking out from her Nicole Miller dress of the same color.

Then there were the velvety red curtains lining the walls, the matching plush red robes with each models’ name embroidered on the back and lots of red lipstick.

“I just don’t want to fall. And if I do fall, hopefully I land where I can morph into a pose of some sort,” Bailee Madison, who was outfitted in a cherry-red Michael Fausto minidress, told WWD.

“Terribly nervous, actually,” Hinkle said. “I’ve never walked a runway; never thought I’d walk a runway; probably will never, after this, walk a runway. The idea that I have to walk in really high heels with a gorgeous ball gown and make sure I don’t fall. And apparently someone last year did fall. Now I’m wondering if it will be me.”

No one fell. (Although television host Sara Haines momentarily stumbled over her floor-length ball gown.) “All My Children” alum Susan Lucci — also known as last year’s catwalk casualty — sat this one out. Instead, opting to meet the press backstage for pre-show photos before taking a front-row seat with her husband, Helmut Huber.

The American Heart Association’s chief executive officer Nancy Brown said the models — along with the roughly 1,600 guests in the audience Wednesday night — were all asked by the American Heart Association to participate. Tickets for the event were not available for purchase. Rather, the event, which is broadcast to millions, is intended to educate and raise awareness about the prevalence of heart disease among women.

“The Red Dress Collection is an amazing opportunity for the American Heart Association and these amazing celebrities to help us, help people understand that heart disease is the greatest health threat to women,” said Brown, who was wearing a red-and-black Etro dress. “These women are all volunteers who are very excited. Many of them have personal family histories with heart disease, or heart disease themselves.”

Twain ended the show with a vocal performance and several dance numbers before a cheering crowd.

But everyone was excited — even the models.

“My friend is coming to see me with her daughter,” Graham said. “She’s never come to a fashion show before. She’s six. So, I feel like I’m the cool aunt that gets to take her to her first fashion show.”