Next month the entrepreneurial actress starts shooting “Home Again,” a new film produced by Nancy Meyers that her daughter Hallie Meyers-Shyer has written the script for and will also produce. 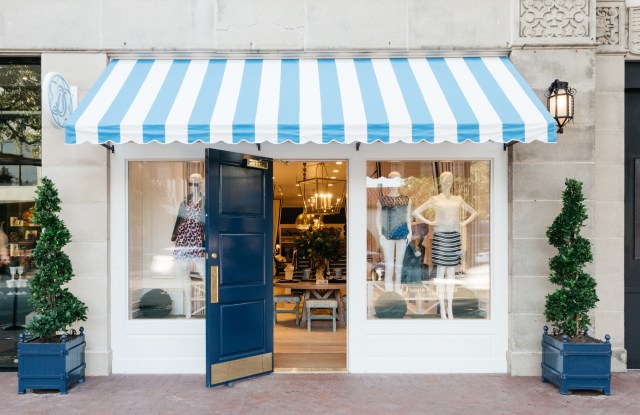 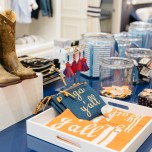 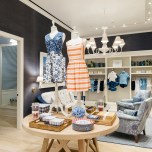 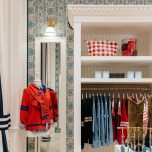 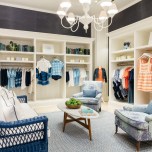 In the increasingly crowded field of actresses-turned-entrepreneurs, Reese Witherspoon certainly ranks near the top, having just opened her second Draper James store, at Highland Park Village in Dallas.

This story first appeared in the September 29, 2016 issue of WWD. Subscribe Today.

The Southern-inspired collection debuted as an e-commerce business last May and its first boutique bowed in Nashville, Tenn., last fall.

En route to Wednesday’s press day, an in-store luncheon and launch party for the new 1,800-square-foot Draper James boutique, Witherspoon said, “Ever since we went live about a year ago, Dallas has been one of our top cities. Customers in Dallas just really seem to love the brand, which is a celebration of Southern lifestyle. I’ve always been a big fan of the Highland Park Village. It’s a great place for communities and families to get together, to enjoy a meal and to see a movie.”

Interior designer Mark D. Sikes created the store’s welcoming Southern aesthetic with contemporary accents. His work can also be seen in Draper James’ Nashville store and the New Orleans-born Witherspoon is currently working with him on a new home in Nashville as well.

Having hosted events with writers like Emily Giffin, who wrote“First Comes Love” and Kimberly Whitman of “Monograms for the Home” in the Nashville store, Draper James plans to have book signing parties for other authors in the Dallas location. Through Pacific Standard, the production company she cofounded with Bruna Papandrea, Witherspoon has secured the film rights for numerous titles including Gillian Flynn’s “Gone Girl” before it was published. As a literacy advocate, the actress is also big on posting about her favorite reads via Twitter and Instagram. She also recruited NFL rookie Malcolm Mitchell to join her book club, and the pair have tweeted book recommendations.

Witherspoon said, “I was just so inspired by his story and how important books have become in his life. He’s inspired a lot of people to expand their literary knowledge. I love that he’s been so open about it and he’s also written a book himself.”

The Oscar-winning actress also sought out Dallas artist Gray Malin for a photograph for the store. (Along with shots of aerial beach scenes or balloons, he is recognized by some for his Prada Marfa series.) The new store also has books to encourage shoppers to linger. Its blue and white decor was inspired by Witherspoon’s collection of transferware and sweet tea is offered to shoppers. “It has a great sort of living room, parlor feel where people can get together and meet people. It feels like a Southern home where people come in and talk about books and things that are going on in the community. I wanted to have that familiar feel.”

Football fans now have a Draper James tailgating collection to peruse in the company’s stores and online. The idea for that new category sprang from shoppers’ feedback via social media. Chief executive officer Andrea Hyde said, “The reaction’s been phenomenal. We want people to go to the games and feel really pretty. It started last fall when people asked if we could make more colors that were appropriate for their schools’ [team colors].”

And Witherspoon is helping to strengthen this fall’s voter turnout with Draper James. The brand’s popular tote bag imprinted with “Totes Y’all,” now has an electoral version that reads “Vote Y’all.”

The paparazzi are inevitably helping business by catching Witherspoon wearing Draper James. As for how that may spike sales, Witherspoon, who works with a design team, said, “It’s hard to say. I certainly love design and that makes it very easy to wear. The whole idea behind creating this brand was to make dressing easier for women, and to design things that are flattering and wearable. Being a woman who has worn lots of different costumes and red carpet dresses, I’ve learned a lot about different women and what they like to wear and what’s comfortable. I try to design into those needs.”

In doing so, she is part of Hollywood’s unofficial club of business-minded actresses lead by Jessica Alba and Gwyneth Paltrow. “Those are women who are accomplishing great things. They’re very inspiring to me. I’m always supportive of women in business. Both of them have been very good friends of mine for a very long time so certainly we take care of each other, support each other and help each other whether it be with social media or questions about different aspects of our business,” Witherspoon said. “We always get together as frequently as we can even though we’re very busy. We’re all moms and we’re all working. But there’s definitely a spirit of helping each other out.”

With 37 film credits to date and counting, the actress, producer and mother of three hasn’t exactly eased up while building a fashion label. Next month Witherspoon starts shooting “Home Again,” a new film produced by Nancy Meyers for which her daughter, Hallie Meyers-Shyer, has written the script. Witherspoon also will help produce the film. In February, she will appear in HBO’s “Big Little Lies” with Nicole Kidman, Laura Dern, Shailene Woodley and Zoë Kravitz, a miniseries that Witherspoon and Kidman also produced. Witherspoon is also starring in the Disney-produced, Ava DuVernay-directed adaptation of “Wrinkle in Time” with Oprah Winfrey.

For now, though, her focus is on Dallas and the new Draper James store. Asked if she has seen signs of the city bouncing back after this summer’s sniper attack on the police and protests, Witherspoon said, “Absolutely, there has been a lot of social outreach from the leaders in the community. There’s a real sense of people pulling together. Dallas has always been one of America’s great cities and I’m certainly seeing a lot of that kind of spirit.”