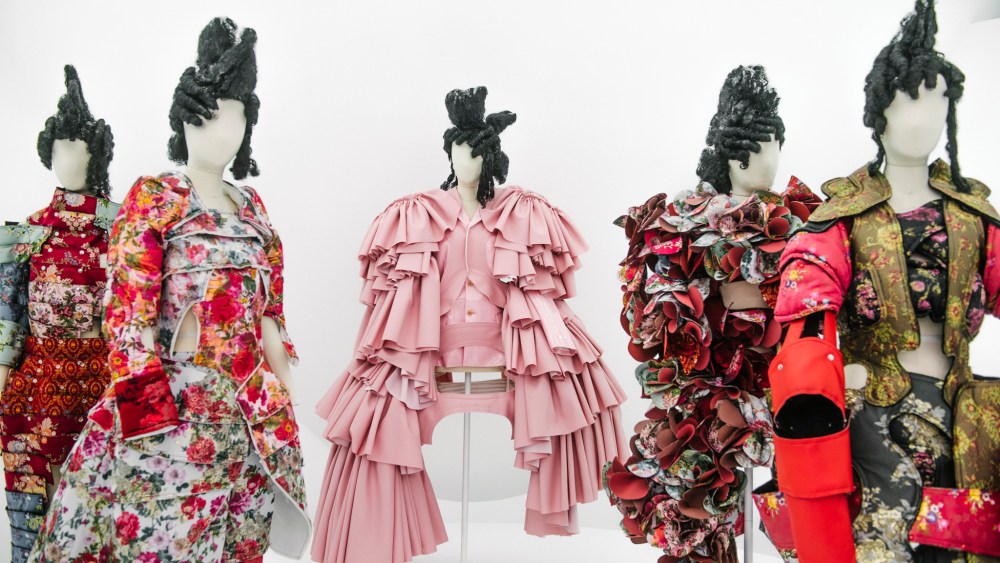 Expressionless and with arms crossed, Rei Kawakubo seemed to be everywhere at once Friday afternoon at the Metropolitan Museum of Art, navigating the circuitous layout of The Costume Institute’s new show dedicated to her.

Ever-intent in her direction, the designer made her way through the futuristic, all-white, brightly lit “Rei Kawakubo/Comme des Garçons: Art of the In-Between,” taking great care with each inspection. Despite a bout of strep throat, her cohort in the operation, Andrew Bolton, The Costume Institute’s curator in charge, kept a fast clip dealing with scores of pre-opening tweaks and questions from the brigade decamped in the Iris and B. Gerald Cantor Exhibition Hall.

A year in the making, the exhibition will run May 4 through Sept. 4, displaying 140 of Kawakubo’s designs for Comme des Garçons from the early Eighties to her fall 2017 “The Future of Silhouette” collection. But visitors are not in for a hum-drum, clothes-on-a-mannequin show in the faintly Guggenheim-esque space. Road maps dotted with quotes from the designer, Bolton’s analysis and descriptions are there for the viewing.

For many, the first stop in the mazelike exhibition space will be a spherical set-up with a selection of colorful gingham dresses from her spring 1997 “Lumps and Bumps” show, a moniker that suggests a body diseased, deformed or monstrous. Other can-you-believe looks include selections from the 1982 fall “Holes” sweaters, a spring 2015 “Blood and Roses” dress and a fall 2012 “2 Dimensions” dress.

“What’s so inspiring about Rei is that for her the body has no bounds, and fashion itself has no limits. That to me is what her legacy is — the body and the dress body in fashion is limitless. To me, she is the most influential designer working today,” Bolton said. “When you think about what’s been achieved in the last 40 years and the types of things we take for granted now — the unfinished, asymmetry, black as a fashionable color were pioneered by Rei. But beyond the formal aspects of that, she has always rebuffed the status quo…but she’s always offered you visions of beauty against a fashionable body. I feel if Rei didn’t exist we would have to invent her to explain the last 40 years because her impact in fashion is that big.”

As the first living designer to have a Costume Institute solo show since Yves Saint Laurent in 1983, Kawakubo handed Bolton the added challenge of her unknowingness. Early on in her career, she said of her fashions, “The meaning is there is no meaning.” Point taken, Bolton set out to make the show an essay, explaining it was “never intended to be a sort of finalized, universal retrospective of Comme des Garcons.”

Intrigued by the idea about the in-betweenness as it relates to the unfolding of modernism as an ongoing project, he said, “I’ve always felt that her work occupied this space that was sort of between boundaries whatever those boundaries are. For me, it’s always about what she’s created with these hybrids.”

Kawakubo told Bolton the show should have been called “The Art of the Modernist” and it could have been culled from her most recent seven collections. Not surprisingly, the selection process took some give-and-take, Bolton said.

“It was hard. She doesn’t like looking back, like many designers and artists. She’s all about newness and creating something new every single season,” he said. “It’s even more difficult for her to look back — physically painful as she explained…I think she got around it by saying, ‘You do what you want and unless I really, really, really object to it just go ahead.'”

The circular design of the space echoes Zen Buddhism’s ideas of ‘mu’ and ‘ma’ — the notions of emptiness and space. Visitors will also find themselves amidst the space between the structures, having to walk around them to get a glimpse of the garments inside. Julien d’Ys was making the rounds so to speak Friday afternoon adding a few last-minute Swarovski crystals to the headpieces he designed. And Thierry Dreyfus from Eyesight Group described the musical bars-like lighting overhead as “the music of the wind from East to West. That’s the score. The first goal when Rei asked me in Tokyo was the people are as important as what you look at. So the light for you, here, or for the clothes has to be all of the same. This is very important.”

Asked for his immediate impression Friday, Kawakubo’s husband Adrian Joffe said, “Speechless. We’re nervous and stressed but I think it’s amazing. But you kind of worry, right? You don’t know if your opinion will be like other people’s. If you weren’t nervous, it’s not a good thing, especially Andrew — until the last minute, perfectionist making sure it’s good. It can only be good according to Andrew and Rei. It can’t be good according to every single person. That would be like the lowest common denominator syndrome. You can’t please everyone. Comme des Garçons has never been about pleasing everybody any way. With strong things you can’t please everybody.”