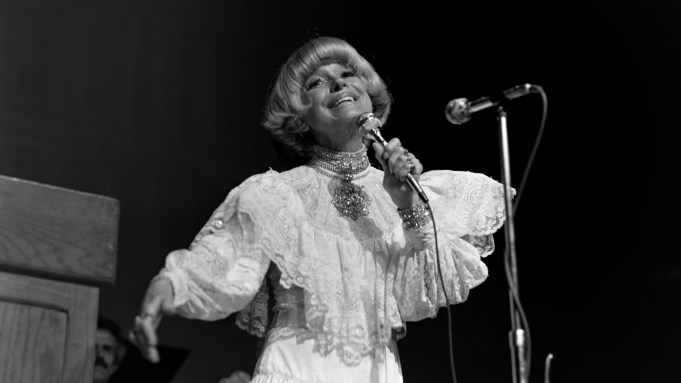 As the quintessential Broadway performer, Carol Channing may have been of another era but she knew how to dress for any occasion.

Channing died today at the age of 97 in Rancho Mirage, Calif. The blonde-bobbed actress earned rave reviews and a Tony Award for her lead role in “Hello, Dolly!” based on the follies of the Twenties. She ultimately racked up nearly 5,000 performances. In a 1974 interview with WWD, Channing revealed how Gloria Steinem considered another of her Broadway roles, Lorelei Lee, to be “one of the first truly emancipated women. She told me that Lorelei was one of her great heroines while she was growing up because she manipulated her own life. She wasn’t a victim of men who asked her to marry them. She chose the man she wanted and she was never jealous of other women.”

Described by gossip columnist Dorothy Kilgallen as “a six-foot Amazon” as “Lorelei Lee” in “Gentleman Prefer Blondes” in 1950, Channing never shied away from her oversize personality. She once confessed to WWD, “I can’t stop wearing primary colors. Muted colors are for muted people. I’m a large person with large features and I figure I should look like I enjoy it. Give me vermilion, chrome, yellow screaming emerald.” Channing’s name first appeared in WWD in 1942, when she played a part in “Cry Havoc,” Allan R. Kenward’s play about the heroism of American women under fire.

Burning 3,000-plus calories a day during her musical heydays, Channing said processed food triggers allergic reactions, due to her bottle-blonde hair. (As for her locks, Channing said they started out blonde as a child, then changed to dishwater, before going “ish-ash mouse.”) Her distilled water and all-natural diet required that all her food be flown in from the California farm she owned, and any fish was flown directly from Cambridge, Mass. Averse to medication of any kind, the ambidextrous performer attributed that tendency to potential allergic reactions and not her Christian Science upbringing.  Known to have a boiled beet lunch backstage at the theater, Channing took her own food anywhere she went — even to the White House. But her personalized takeout was transported in a Mark Cross leather bag with little thermoses.

The water was stowed away in a silver flask by Pierce-Arrow — a gift from her third husband, Charles Lowe. (There were four husbands in total.) The couple was always trouping off to wherever Channing was performing. They often camped out at the Waldorf in New York, the Beverly Wilshire in Los Angeles and the Dorchester in London. “But don’t feel bad I have no home. I don’t. I haven’t washed a dish in 15 years,” Channing told WWD. (Photographs galore of an ever-smiling Channing included an autographed one from Robert F. Kennedy and three Al Hirschfeld caricatures adorned her Waldorf suite. Silver vases, trays and plaques added another layer of shine. “Don’t you love it all? Silver makes a hotel room so personal. Just like home,” Channing told WWD in the Seventies.

After landing on President Richard Nixon’s White House enemies list, Channing chalked that up to having recently presented then-first lady Pat Nixon with a plastic ring at a luncheon. Channing told WWD, “I told her the value of a diamond is in the sentiment with which it is presented. All I can think is that the president had the ring appraised.”

Channing’s first “Hello, Dolly!” outing on Broadway was described in WWD as “looking like some crazy bird with pink feathers, a wooden puppet’s face, a perpetual grin and no visible talent,” but Channing strolled right off the St. James stage “with everybody in the audience who pretended to have a heart. A star is a star and Channing is a flashing, sparkling steal-your-heart-away star in a new musical called ‘Hello,Dolly!’ which is incidentally a lot of fun.” The costumes she wore as the lead won Freddy Wittop a Tony for costume design in 1964.

Whether turning up at the Los Angeles Fashion Group’s salute to Rudi Gernreich or lunching with Stanley Marcus, Channing was aligned with the fashion crowd. By 1969, she was among the regulars at Vidal Sassoon’s Beverly Hills salon. She wasn’t above ducking into Capezio’s Lincoln Center store to buy a few pairs of shoes to pair with her Victor Joris clothes. On occasion, later in life, Channing would wear suits and bow ties. After her $30,000 platinum mink Halston coat was recovered after being stolen in 1976, it was insured to the hilt. That same year she appeared with Angela Lansbury and Virginia Capers in the touring play “The Bed Before Yesterday.” During a preview in Miami, the trio’s running joke was, “Do you think this town is big enough for the three of us?”

Channing also parlayed her role in George Bernard Shaw’s “The Millionairess” to promote diamonds in a full-page ad for Sears, Roebuck. The ad described Channing as “That Diamonds Are a Girl’s Best Friend Gal.” Channing was a Ritz Furs customer and for a 2002 trip to the Oscars, she asked for and got Harry Winston’s biggest rocks in Beverly Hills. The musical and comedy star was the first woman to land on the cover of GQ, which belied the magazine’s 1991 claim that Julia Roberts earned that title. She was also the first star — male or female — to have their name in lights outside the Ziegfeld Theater in New York City.

By 1952, the enterprising performer racked more than 1,000 performances in “Gentlemen Prefer Blondes,” wearing out three sets of costumes in the process, breaking five phony diamond bracelets, two tiaras, five pairs of earrings, four orchid leis and having to personally resew 600 buttons back on her costume. Channing also learned to wield a soldering iron in order to cement hundreds of fake gems back into their settings on her costumes.