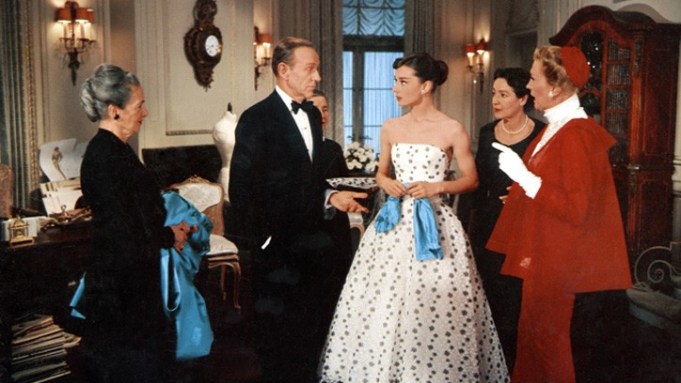 “The September Issue” and “The Devil Wears Prada” weren’t the first hits to promise viewers an inside look at the fashion world. The topic was a popular one back in the Forties and Fifties, as well. But whether they presented the fashion world as a corruption-ridden snake pit or a candy-colored dream world, the portrayals weren’t always the most accurate. Here, a look at four midcentury films about the industry and how they stack up in terms of realism.

The Garment Jungle (1957)
Director: Vincent Sherman
Tag line: “Life is cheap in the Garment Jungle.”
Fashion Cred: Costumes by Jean Louis.
Based on a series of exposés in Reader’s Digest, this noirish film presents New York’s West 30s as “a teeming jungle of brutal competition and terror,” according to the stern narration. War vet Alan Mitchell goes to work in his father’s dress business and discovers corruption, union-busting and some ill-advised bustle gowns.
Most ridiculous line: Buyer Lee Hackett comments of a dress in the showroom: “Do notice the movement in the back. It really talks. Back talk is terribly important this season.”
Least believable moment: When a designer so much as mentions unionization, anti-union goons send him hurtling down an elevator shaft.
Best piece of advice: “First thing you learn, you gotta be nice to buyers.”

Designing Woman (1957)
Director: Vincente Minnelli
Tag line: “His world is guys and dolls! Her world is gowns and glamour!”
Fashion Cred: The story line was suggested by Helen Rose, a longtime MGM costume designer who is best known for designing Grace Kelly’s wedding gown.
Lauren Bacall, a designer who averages nine wardrobe changes a day, finds romance with a sportswriter played by Gregory Peck, but their lack of common interests, along with various totally imagined infidelities, threatens to drive them apart.
Most ridiculous line: “I’d have wagered a Lilly Daché hat there was another woman at that table.”
Pre-PETA moment: Bacall sports a full-length mink at an underworld boxing match.
Best piece of advice: For those who’ve never attended a fashion show, Peck warns: “It’s a sort of pagan ritual-ceremonial dance, where the faithful sit around sipping tea and worshipping clothes. There’s a sacrifice involved, too — $1,500 for a dress.”

Funny Face (1957)
Director: Stanley Donen
Tag line: “S’wonderful! S’marvelous!” (also the name of a Gershwin song used in the film)
Fashion Cred: This one is bursting with it. Fred Astaire’s character is based on Richard Avedon, Fifties top models Suzy Parker and Dovima have small roles and the legendary Edith Head designed the costumes.
Mousy bookstore clerk Audrey Hepburn is discovered by Astaire’s photographer character and transformed into the sophisticated cover girl of Quality magazine. Endless musical numbers ensue.
Most ridiculous line: “You’re in the fashion world. We’re cold, artificial and without sentiment. How can you be in love?”
Least believable moment: The staff of Quality magazine participates in an unusual amount of coordinated song-and-dance routines.
Best piece of advice: “A magazine must be like a human being. If it comes into the home, it must contribute. It can’t just lie around.”

Cover Girl (1944)
Director: Charles Vidor
Tag line: “A mirthful, magical musical!”
Fashion Cred: Costumer Gwen Wakeling, who went on to design Barbara Eden’s genie outfit on “I Dream of Jeannie.”
Showgirl Rusty Parker (Rita Hayworth) enters a contest to be on the cover of the fictional Vanity magazine. The fashion editor dislikes her, calling her “a leaping thyroid” and a “gland case,” but Hayworth wins because the editor in chief was once in love with her grandmother (played by Hayworth in flashbacks.) Still, she worries her stardom will threaten her relationship with fellow hoofer Gene Kelly.
Most ridiculous line: The following exchange between Hayworth and the magazine editor: “Have you ever done any modeling before?” “No, but all you have to do is keep still, don’t you?” “That always helps.”
Least believable moment: To test Hayworth’s posing skills, the editor has her sit and stand up a couple times, then pronounces her a world-class model. Tyra Banks would be horrified.