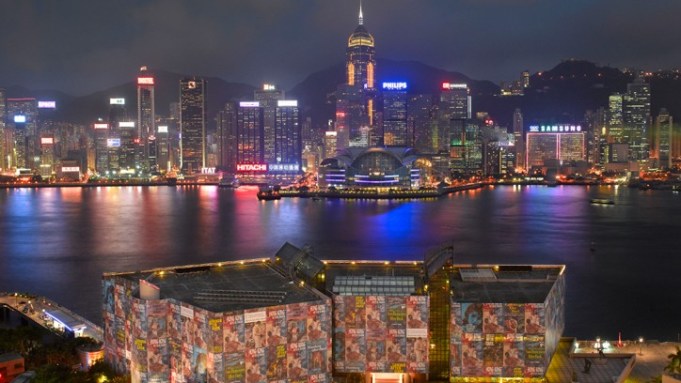 HONG KONG — One of this city’s first-ever public art installations has been unveiled, courtesy of Louis Vuitton and artist Richard Prince, who has wrapped the Hong Kong Museum of Art with enlarged replicas of pulp-fiction novel covers.

The installation, which takes its theme from Prince’s “After Dark” series, heralds a significant exhibition of paintings, photographs and video installations collectively called “Louis Vuitton: A Passion for Creation” that will be displayed inside the Museum of Art from Friday to Aug. 9 as part of Hong Kong’s annual French May Arts Festival.

Located along the Tsim Sha Tsui promenade, the Museum of Art is one of Victoria Harbour’s most recognizable landmarks. Prince has covered the entire exterior with printed fabrics featuring bright colors and animated graphics. Each panel illustrates after-midnight stories in different cities around the world, with every other panel representing Hong Kong After Dark. The images are created using “rephotography,” a process Prince described as “resemblance more than reproduction. A rephotograph is essentially an appropriation of what’s already real about an existing image and an attempt to add on or additionalize this reality onto something more real — a virtuoso reality.”

Jean-Baptiste Debains, president of Louis Vuitton Asia Pacific, said the project has been a year in the making. “The idea started about a year ago during the opening of Canton Road,” he said, referring to the debut of the brand’s second Maison in Hong Kong in March.

Indeed, not long after that event, Hong Kong’s chief secretary, Henry Tang, visited LVMH in Paris to finalize plans for the exhibition, which is a collaboration with the consulate general of France in Hong Kong and Macau and the city’s Leisure and Cultural Services Department.

“Everyone’s been supportive,” said Debains, who attributed the relatively smooth sailing to the company’s ties here. “Louis Vuitton has been present here for over 30 years. It’s a strong relationship that has developed that goes beyond the stores we operate. We’re happy with the cooperation we’ve had with both the authorities and the Museum of Art,” he said, declining to say how much it cost the company to mount the exhibition.

During the run, visitors to the Museum of Art will encounter an exhibition with three segments. The first, called “The Architectural Project,” explores Frank Gehry’s designs for the Fondation Louis Vuitton pour la Création, the art center under construction in Paris. Gehry is expected to attend the opening of the exhibition next week with LVMH Moët Hennessy chairman Bernard Arnault.

The second part of the exhibition, “The Collection, A Choice,” is a selection of artworks from the foundation’s permanent collection. Works by Jean-Michel Basquiat, Gilbert & George, Jeff Koons, Bertrand Lavier and others will be featured along with 25 video installations from 23 artists. This section also will highlight artists who have collaborated with Mark Jacobs on Louis Vuitton projects so visitors can see firsthand the original designs for Takashi Murakami’s “Eye Love Superflat (Black)” monogram from 2003, Richard Prince’s “broken logo” from 2007, and Stephen Sprouse’s “Rose” from 2001.

Jacobs, who will be in Hong Kong for the opening, will welcome a number of visiting artists, including Gilbert Proesch, George Passmore, Prince and Murakami.

At the urging of Suzanne Pagé, the foundation’s artistic director, the final part of the exhibition is dedicated to seven young Hong Kong artists. Included are Lee Kit, well-known for celebrating the mundane in such creations as hand-painted tablecloths, and Doris Wong, whose provocative works often involve startling interaction with viewers.

Two of the Hong Kong artists are also on show at the Gallery in Louis Vuitton’s Canton Road Maison. Debains said this is not directly linked to the exhibition, but does tie in well. Louis Vuitton stores in Hong Kong will dedicate window displays to the event.