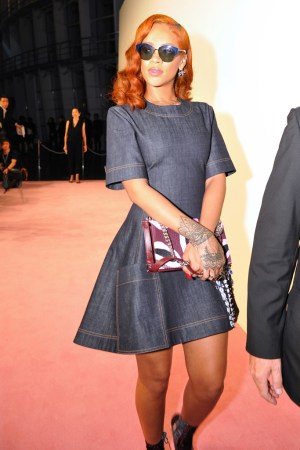 TOKYO — Rihanna made her first trip to the Japanese capital in three years as the guest of honor of Dior, which staged a repeat show of its fall collection here Tuesday evening.

The singer entered the curved glass facade of the National Art Center Tokyo, where the show was held, wearing sunglasses and a denim minidress with floral appliqués on its flared skirt. Ornate, lace-up jacquard ankle boots and a pink and burgundy abstract print handbag completed her look.

The last time Rihanna was in Tokyo was for the premiere of the film “Battleship” in 2012, and she said she was excited to be attending her first fashion show in the city. In addition to the Dior show, she noted she enjoys taking in the fashions of Japanese women.

“I love Japanese style,” she said. “I love the way they put it all together.” She added that the way Japanese women mix different elements and styles is similar to her own approach to dressing.

“They love modernity, they love fashion, but they want to do it with respect to a high level of excellence in the workmanship and things like that,” the executive said.

Rihanna will stick around Tokyo on Wednesday, when she plans to head out into the city to see even more of what the Japanese are known for.

“I want to go, not really window shopping, but I want to go around and check out the beauty products, the packaging…I want to see all of it,” she said.