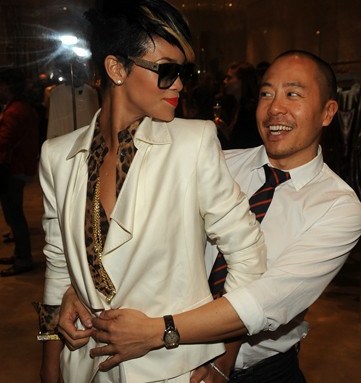 Continuing the wave of store openings this week, Derek Lam christened his new SoHo boutique Wednesday night with a jam-packed cocktail hour. Lam cordoned off the front sidewalk for the occasion, tenting the space and filling it with palm trees and banquettes where a mix of fashion editors, models like Lakshmi Menon and Maryna Linchuk and socials sipped lychee martinis and snacked on a variety of dumplings. But the real surprise came when pop star Rihanna arrived.

“She picked my favorite look from spring,” enthused Lam as the songstress braved a barrage of photographers. “I’m going to try to show her around, but she’s so surrounded by fans.”

The two made their way back toward the dressing rooms, where she admired the store’s futuristic glass design by architects Kazuyo Sejima and Ryue Nishizawa.

“I want this to be my house,” gushed Rihanna, who was sporting new blonde hair streaks. Fresh off her performance at the Costume Institute Gala Monday night, she admitted to some initial butterflies. “I was nervous at first, but then I just got back into it and went for it. I’m recording my new album right now.”

A few blocks away, Ric Pipino was celebrating his new salon, Pipino New York, with Genevieve Jones and Sante D’Orazio.

“I wanted it to be small and intimate,” he said of the jewel-box-sized space. “And I invited all of my [Centre Market Place] neighbors.”

Fabiola Beracasa was there doing her due diligence. “He did my hair for the Met,” she said.