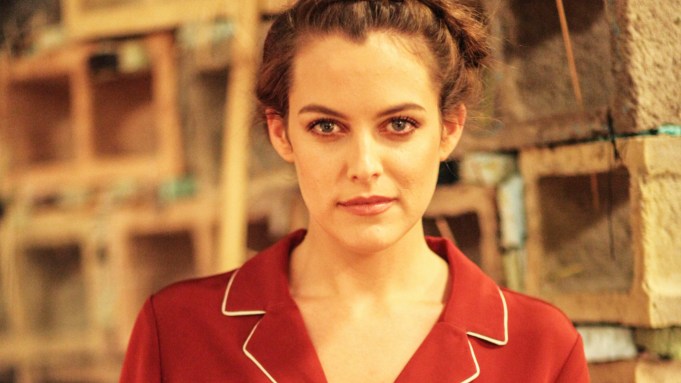 “I’m drinking this green juice so if I get green stuff in my teeth, I’m sorry,” says Riley Keough as she waves a plastic cup of cold-pressed kale and apples and settles into a restaurant booth to discuss her forthcoming project, “The Girlfriend Experience,” which premieres on Starz April 10. “I don’t spend money on the lavish life, but I spend on excessive green juices.”

It seems fitting that Keough would deglamorize the moment when she’s spent the better part of her day fielding questions about what it’s like to play a law student who moonlights as a high-priced escort. The racy scenes clipped in the trailer have already burned up the Internet (and industry folk who saw the first four episodes premiere at the Sundance Film Festival have kept the buzz going). But when Keough says she’s not fazed by doing nude scenes, nor is her husband of one year, stuntman Ben Smith-Petersen, you believe her because she’s earnest in a manner that borders on slightly geeky, despite her model good-looks.

“We wanted to show this girl doing this thing and let audiences make up their own minds about it, instead of putting ideas about sex work into peoples’ heads. That’s why I wanted to do the show,” she says. Directed and written by Lodge Kerrigan and Amy Seimetz, the 13-part series is based on Steven Soderbergh’s 2009 movie that starred adult film star Sasha Grey. Soderbergh was so impressed by Keough’s supporting performance in “Magic Mike” that he already had her in mind for “Girlfriend.”

The show implies early on that Keough’s character Christine, a second-year law student and corporate law firm intern, is struggling to pay her bills. But it also hints at emotional turmoil bubbling beneath her tightly controlled surface that may be the larger reason for her joining the world’s oldest profession.

“It’s just half-hour episodes, not intimidating, definitely smart, with a little taboo sex,” Keough says. The show is, after all, of the premium cable binge-watch variety that gets people hooked. “I’m the same way — I’ll watch a whole series in like, two days,” says Keough, who completed filming last June. But, she says, it’s sci-fi and fantasy films that “really get me going mentally. I love watching Harry Potter. I’m not snobby about my movies; I just love all films.”

Keough, 26, has always wanted to be a director, and chose to start acting when she was 19, with no formal training. “I wanted to wait until I was older and I was done with high school and had experienced all that,” she says. “I still want to direct, that’s my main love and that comes from being obsessed with subtleties and people.”

She’s shown her skill at conveying emotion with little dialogue, as she did playing captive wife Capable in “Mad Max: Fury Road.” She also impressed audiences in this year’s Sundance Film Festival indie “Lovesong,” as Sarah, a neglected young wife and mother who embarks on an emotional road trip with her best friend, played by Jena Malone. The movie was directed by So Yong Kim, who also directed Keough in the short “Spark and Light,” commissioned by Miu Miu.

Seimetz actually took a small role in “Lovesong” so she could get to know Keough ahead of directing her in “The Girlfriend Experience” “She’s so genius. She’s super smart, she asks all the right questions and she’s also a weirdo. I love weirdos. You know, not a standard typical person but a really offbeat person, and it took an offbeat and intelligent actress in order to make [Christine] really interesting,” Seimetz says.

While Keough is still trying to establish herself in Hollywood — and to be known as more than Elvis Presley’s granddaughter — she sees the danger in becoming too wrapped up in her career. “It’s a very hard career because it’s very unstable, so you’re always in false panic mode and don’t ever stop and just enjoy life. So I am trying very hard to be present and enjoy my life. At the end of the day [acting] is a job — a very immersive job that can be taxing emotionally. If I had my way, I’d just do one or two movies a year, then chill.”

She won’t have much time since this month she starts filming the sci-fi thriller “The Discovery” with Robert Redford, Rooney Mara and Jason Segel. She’ll play a lab intern to Redford’s scientist character, a man who proves that the afterlife does exist.

Coming from a family of entertainers, Keough says she understands the desire to do things that connect with human emotions. “Everyone enjoys music and film. It just makes people happy or makes them feel things. We’re not saving peoples’ lives, but if we are entertaining them, that’s as much as I can contribute in this life.”