The film will be released in theaters nationwide on Oct. 2 and digitally on Oct. 6.

Prior to the coronavirus pandemic, the cultural commentary in “Save Yourselves!” — a sharply written and well-acted comedy — could easily be seen as reflecting the world’s excessive use and increasing addiction to social media.

“And us being so consumed in it that we don’t see the reality that’s around us…” says actor John Reynolds, who costars alongside Sunita Mani in the film, out in theaters nationwide on Oct. 2 and digitally on Oct. 6. (Presented by New York distribution company Bleecker Street, the film screened at Sundance Film Festival earlier this year.) “We’re all in our own information feed that loops.”

The storyline has even more significance these days.

“In the past year, with everything that’s happened, it’s taken on new meaning for me,” continues Reynolds, chatting from his home in Brooklyn over video. “And I’m seeing parallels in my own life in a few ways. It’s been funny to see that” — he takes a pause — “I am a cliché.”

Twenty-nine-year-old Reynolds and Mani, 34, play a Brooklyn-based Millennial couple (evidentially not too much of a stretch for Reynolds, residing in the borough with his girlfriend, illustrator Bianca Diaz) who — after acknowledging their mutual dependence on technology — decide to turn off their phones and head to a secluded cabin for a few days to disconnect from distractions and reconnect with one another. The timing couldn’t be more unfortunate, though. While the two are offline and completely oblivious, aliens invade Earth. 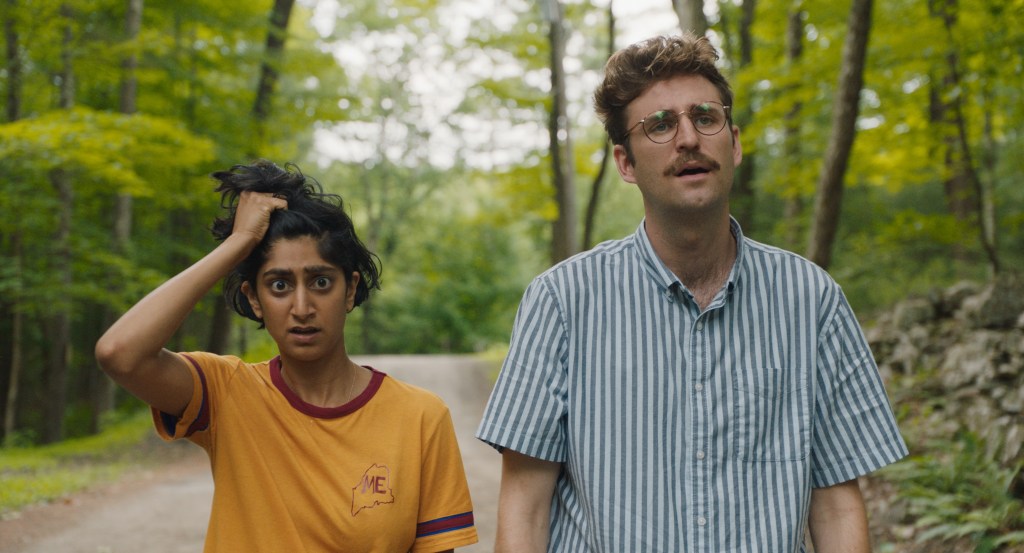 Sunita Mani and John Reynolds in a still from “Save Yourselves!”  Courtesy

Certain scenes are reminiscent of this year’s climate, in some ways, “with the pandemic and people actually hiding out in cabins and escaping,” says Reynolds. That “doomsday” mentality and rush to buy supplies was our own reality, much like the characters in the film, he went on.

In their world, instead of fighting a virus, it’s a battle with extraterrestrials — colorful, seemingly harmless “pouffes” that are, in fact, deadly. As a viewer, it’s terrifying but also hilarious, thanks to the dialogue and costars, watching the juxtaposition of the silly-looking, superficially cute creatures and their fatal force, combined with the protagonists’ blissful unawareness and all-around hipsterism as they confront and navigate their new reality.

When Reynolds took on the project, shot a year ago remotely in Woodstock, N.Y., COVID-19 had yet to reveal itself. He was attracted to the subject and the script, written and directed by Alex Huston Fischer and Eleanor Wilson, as well as the opportunity to work with Mani, a comedian and actress known for “Mr. Robot” and “Glow.”

“I was really excited about getting to act with someone I already love and have a rapport with,” says Reynolds. The two initially met in the New York comedy scene.

He began in comedy himself, Reynolds says, in Chicago at the age of 18. He then moved to New York, and “the opportunities just seemed to be there for acting in comedy, and television was expanding,” he says. “I was lucky enough to get on some cool shows. And that was really it.”

Those shows include Netflix’s hit “Stranger Things,” Hulu’s miniseries “Four Weddings and a Funeral,” co-created by Mindy Kaling, and “Search Party,” a dark comedy (starring Alia Shawkat) with a cult following that premiered quietly on TBS back in 2016 but has seen a growing audience since its third season premiered this summer on WarnerMedia’s HBO Max streaming service. Fans are eagerly awaiting the drop date of its fourth season.

Those familiar with the series will recognize some familiar faces in “Save Yourselves!” — actors John Early, Jo Firestone and Mani herself, who appears in early episodes of the show.

“Naturally, there’s a crossover in friend groups,” says Reynolds of the creative scene. He knew Early, too, from the New York comedy world before they both got cast in “Search Party.” 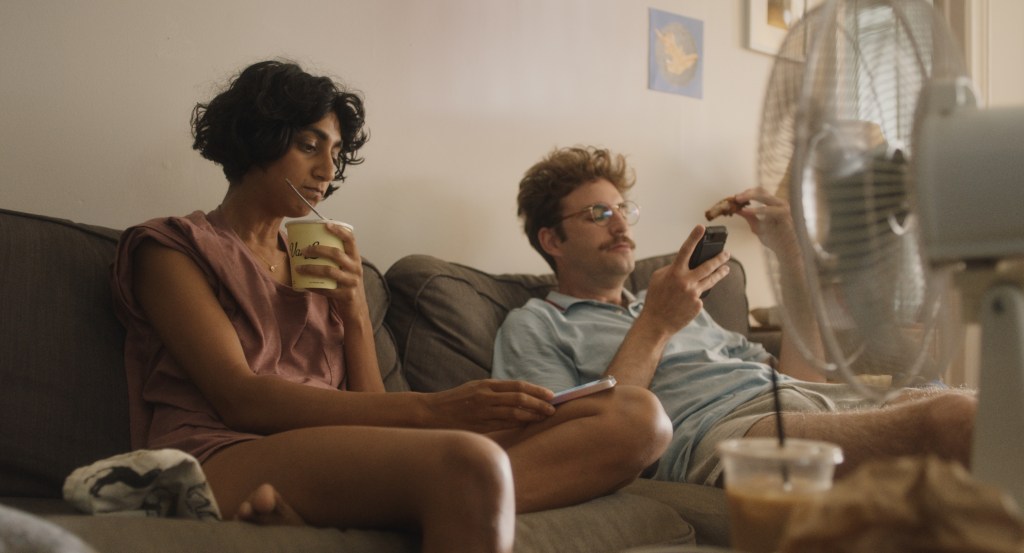 Sunita Mani and John Reynolds as characters Su and Jack in their Brooklyn apartment early on in the film.  Courtesy

Next, Reynolds will appear in Syfy’s animated series “Wild Life.” And while in self-quarantine, he’s been writing, working on developing a show with friends Gary Richardson and Carmen Christopher, and collaborating with Diaz on a children’s book. He’s also picked up an old hobby — throwing pottery.

“That’s becoming cliché now, too,” he says with a laugh, showing off a mug. He’s sporting a Hawaiian shirt he found in a thrift shop in Chicago years ago.

Asked about the brand, he tugs the back of the collar. “Can you see the tag? What am I rocking?” he asks. It’s Honolulu-based Tori Richard.

“The most for myself thing I bought is a pair of overalls that I thought I was going to just throw pottery in, but then I started wearing them all over,” he continues of his look of late. “And they were really comfortable. I hadn’t worn overalls since I was a kid.”

He’s also been donning Veja sneakers and J.C. Penney T-shirts on rotation that “fit perfectly,” which he discovered through his late grandfather, as well as a particular standout tie-dye top from Slam magazine, a basketball publication. (He’s a lover of the sport, which he played growing up. Standing tall at reportedly over 6 feet, it’s no surprise.)

Though his character in “Save Yourselves!” — the mustached Jack — tends to wear basics, T-shirts and button-downs, it’s easy to imagine the fictional figure pulling from Reynolds’ closet. The actor admits that he in fact saw parts of himself and his friends reflected in Jack. It’s one reason he was drawn to the project, to explore the role of masculinity.

“In my own work, I’m always trying to dissect what my own masculinity means or these ideals of masculinity that I grew up with and how I can sort of, in a cathartic way, take the piss out of them,” he says.

While it’s been an “anxiety-ridden” year, it’s also sparked important dialogue, he shares.

“[It’s been] a lot of listening and a lot of learning, which has been good…” he continues. “I guess the conversations have been the best part.”