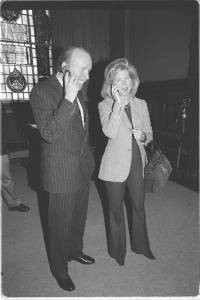 Those who love a well-appointed room, and who wouldn’t dream of missing the opening night of the Winter Antiques Show, all hustled over to the Seventh Regiment Armory to find the treasures and tchotchkes of their dreams. Co-chair Diane Von Furstenberg came in limping after a skiing accident in Aspen. “This is the first time I’ve worn heels,” she said, “though it doesn’t seem to make a difference either way.”

Meanwhile, interior designer Celerie Kemble was in such a hurry to beat the crowds that she rode through the cold in a rickshaw. “I couldn’t find a cab,” she explained.

And which of the show’s objets sent event chairman Arie Kopelman’s heart racing? “I’m very private about my acquisitive self,” he demurred.

“I’ll get it out of you,” insisted Elle Decor’s Margaret Russell. She’d certainly have an opportunity during dinner at Daniel, where the two were joined by Mayor Mike Bloomberg, Bettina Zilkha, Jeff Klein and architect Richard Meier, who rushed in after a World Trade Center meeting.