On Friday night, a slew of Manhattanites proved just how far they would go for a black-tie gala: 45 minutes by car to the Bronx, for the New York Botanical Garden's Winter Wonderland Ball hosted by Escada. 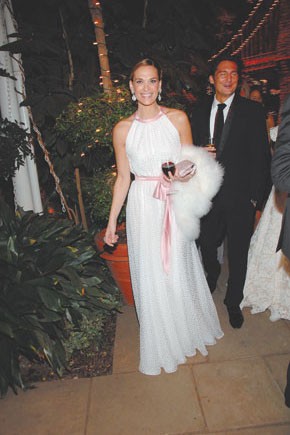 On Friday night, a slew of Manhattanites proved just how far they would go for a black-tie gala: 45 minutes by car to the Bronx, for the New York Botanical Garden’s Winter Wonderland Ball hosted by Escada. “Everyone gets lost,” said Molly Sims of the outer borough venue. “But not me, I got here right on time.” The model-cum-actress added some star wattage to the mostly social crowd, which included Jennifer Creel, Alex Kramer and Marjorie Gubelmann. But perhaps most remarkable was the perennial gal-about-town who actually managed to drag her other half to the boondocks. “This is my husband,” said Upper East Side dermatologist Lisa Airan of her Toronto-based plastic surgeon hubby, Trevor Born. “See, he really does exist!”

Meanwhile, in Miami, the crowded social schedule had partygoers on the move. Barbara Wilhelm, Roopal Patel, Jeanne Greenberg Rohatyn and Kim Heirston Evans all stopped by the Jimmy Choo dinner on the terrace of the Raleigh hotel, but left before a morsel had been served. It was probably a wise choice, as the rest of the guests, including Trevor Traina, Anne Hearst and Olivia Chantecaille, weren’t served until 11. Eating wasn’t really the point, anyway. After sitting for a mere 30 minutes, many of host Tamara Mellon’s guests took off, limited edition Richard Phillips printed Jimmy Choo clutch in hand.

It seemed Owen Wilson and Woody Harrelson were on the same tight schedule: The pair, just back from Peru and still sporting their traveling fashions (Birkenstocks and flip-flops) stopped in to check out the Raleigh scene for 10 minutes. “C’mon, one last good swig,” said Harrelson before he slammed his snifter on a table and the duo walked out to head to the Visionaire party, where they joined ballplayer Alex “A-Rod” Rodriguez and Pharrell Williams, who came from Craig Robins’ annual Design Miami fete. Already having made his mark in fashion, Williams is now adding edgy interior design to his résumé in a collaboration with Paris- and Miami-based gallery owner Emmanuel Perrotin.

Meanwhile, Yvonne Force Villareal had skipped off to Larry Gagosian’s dinner at Mokai, which was transformed into a complete recreation of Paris’ Kaspia, down to the napkins. Guests feasting on the imported caviar and smoked salmon included honchos Steve Schwarzman and Steve Cohen, who had spoken with Gagosian about purchasing Tom Sachs’ “Dollar Bill” piece at the fair.

Saturday afternoon brought a brief respite, with Simon de Pury hosting a luncheon aboard Tom Perkins’ $9.8 million yacht. (Like many things at the fair, it is for sale.)

That night, the challenge wasn’t the number of parties — it was simply finding the party, which in this case was at Paul Wilmot’s Miami Shores home.

“The cab pulled up to a house covered in Christmas lights,” said Fabiola Beracasa, “and I said, ‘I’m pretty sure this is not it!'” Others at the poolside party included Calvin Klein, Blaine Trump and Emilia Fanjul. But perhaps the most welcome face was that of Waverly Inn chef John DeLucie, who had flown in to cook the buffet dinner of chicken potpie and filet mignon — well, him and the male models jumping in the pool (a Wilmot party trademark).