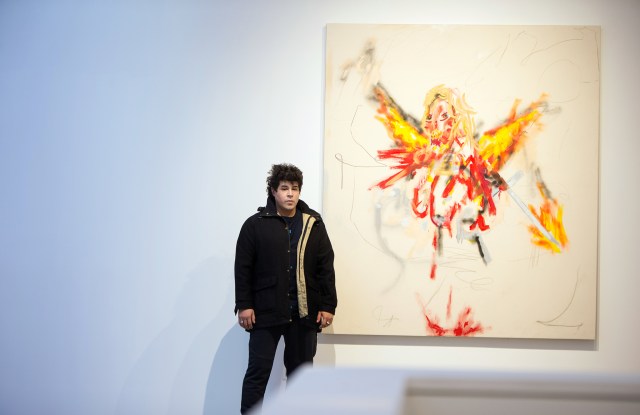 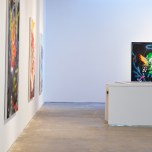 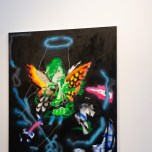 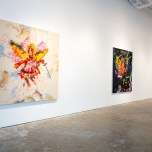 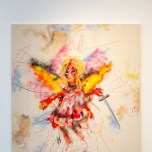 A year ago, on the eve of New York’s pandemic shutdown, Belgium-based gallery Sorry We’re Closed brought a suite of Robert Nava’s mythical creatures to the Armory Show. Tucked into an exhibition space at Pier 90 were several of Nava’s colorful large-scale paintings depicting ecstatic mythical creatures suspended in activity: a floating witch, dragon breathing fire atop a swatch of bright green grass, a vampire levitating above a castle. Amongst the high volume of work by leading contemporary artists, the whimsy of Nava’s work left a lingering effect.

A lot has changed in the past year for Nava. He’s since signed on with Pace Gallery, making his debut with the gallery in December during Miami’s art week, which was shortly followed by a solo exhibition at Pace’s seasonal space in Palm Beach. Nava’s work has also heated up on the secondary market; last summer, his diptych painting “The Tunnel” sold two times over the estimate by Phillips, and in the fall two of his paintings sold in a Christie’s auction each fetched more than $100,000.

The anchor piece for Nava’s latest solo New York exhibition “Angels” isn’t for sale. That 2019 painting, which depicts a seraphim in fire-tones, has sentimental value for Nava and hangs in his Brooklyn, N.Y., apartment, but has taken up temporary residence at Vito Schnabel Gallery in Chelsea. “Angels,” which opened in late February, marks the opening of Schnabel’s second New York gallery, located in a skylit space that previously housed The Robert Rauschenberg Foundation’s Project Space.

“All I had in my mind is I wanted it to be something to do with fire. And then the wings started coming out,” Nava says of that initial painting, which spawned a dedicated series around the angelic archetype. Seraphims are the highest-ranking celestial creatures in Christian angelology, and commonly associated with fire; Nava’s color palette in the series veers heavily golden in tones of yellow, orange, and red. “From an element of fire, it spawned off into the other elemental zones,” he adds.

When he decided to devote an entire show to angels, he imagined the winged creatures in many forms — in action, wielding fire, facing an asteroid and lightning, and floating in the sky — and in relation to all four elements.

Nava’s work is rooted in a strong formal foundation — a graduate of Yale’s master of fine arts program (and originally from Indiana), his seemingly impulsive marks are often carefully considered and planned. “Sometimes I’ll sketch so much that it’s almost automatic,” he says, likening the process to practicing music or dance; preparation creates muscle memory. Sometimes ideas don’t work out as planned and end up part of the creation process.

“This blue one, there’s like three bad paintings under it — not bad; they’re just different,” he says, gesturing to one of the paintings in the gallery; nearby, another finished piece sits atop what he describes as a Cupid angel. “I was trying to do something with hearts, and it just wasn’t working,” adds Nava. “It’s almost an abstract painting in itself.” 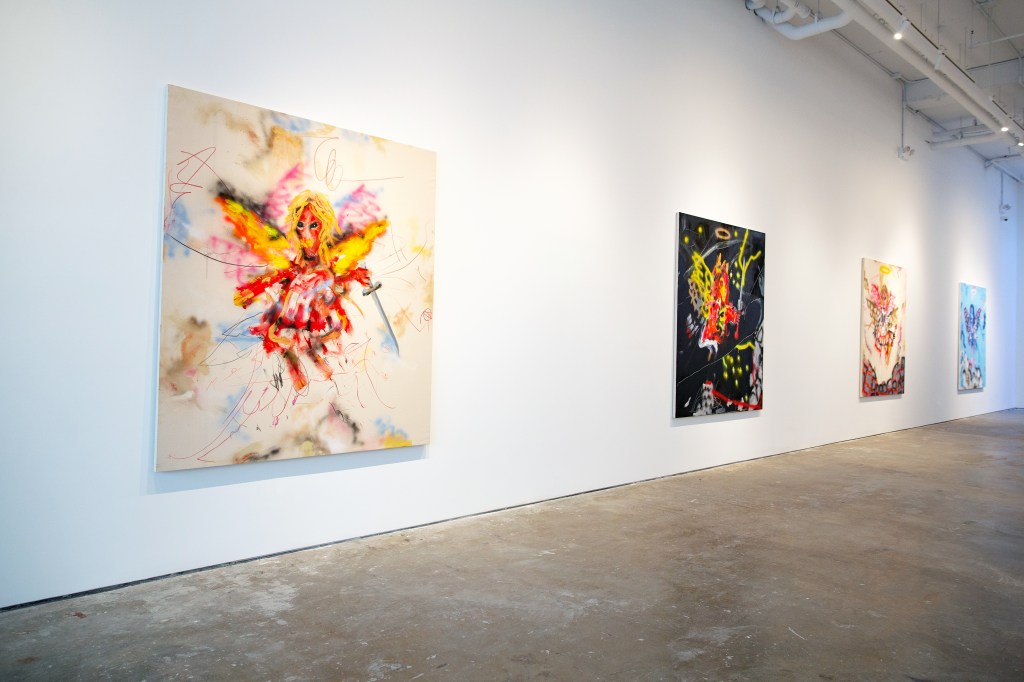 He takes a nonliteral approach to figuration, and his paintings reflect a Neo-expressionist approach to its content. His work has been described as “child-like” — a reductionist summary for his bold use of color, deceptively spontaneous approach to mark-making, and whimsical renderings of his subjects.

Nava’s large-scale paintings have long incorporated mythical creatures — winged cats, serpents with tiger heads, dragons, ghosts and vampires. His paintings gesture toward his subjects — faces are often defined by minimal cues like a dot for an eye and semicircle for a mouth — raising the question of a viewer’s aesthetic expectations for mythical depictions.

It’s been an intense few months of creation, and Nava is looking forward to taking a break — an exhale. “You need some time away from the studio sometimes,” he says.

Nava is looking at moving his studio to a space in Brooklyn, and mulling adding an assistant to the mix. (He notes that his black studio cat, Jumanji, is occasionally of some help. “There was this one time I was in the zone, I felt like I was killing it in the painting. And then I looked over at Jumanji and he looked at my eyes and just nodded his head, like, ‘keep going.’”)

Nava wasn’t able to travel to his warmer-weather exhibitions with Pace — because of the pandemic, he’s cautious to fly — but the Vito Schnabel show means that he was able to witness his installed work together in one space. It’s an experience that’s already generating new ideas for Nava.

Glancing over a railing toward the lower level of the gallery, Nava hints at a new avenue for his seraphims: all of the angels on the main floor of the gallery carry swords, but the most recent angels below wield shields. And while Nava’s angels on view at Vito Schnabel Gallery are all socially distanced within their own canvases, Nava imagines bringing them together into narrative groupings within one painting down the line.

Although he imagines narrative possibilities for his angels, Nava isn’t interested in projecting a narrative story for viewers to take away from his work. The artist paraphrases the ideology of Francis Bacon, the 17th-century English philosopher who championed the concept of the modern scientific method. He hopes that people will view his own work through a similar lens of observation.

“[Bacon] said something like: what do these mean? And he said, nothing — only what people find in them,” says Nava. “It’s a really beautiful angel, so I can’t say that they’re nothing — but I hope [viewers] find whatever experience they bring to it.” 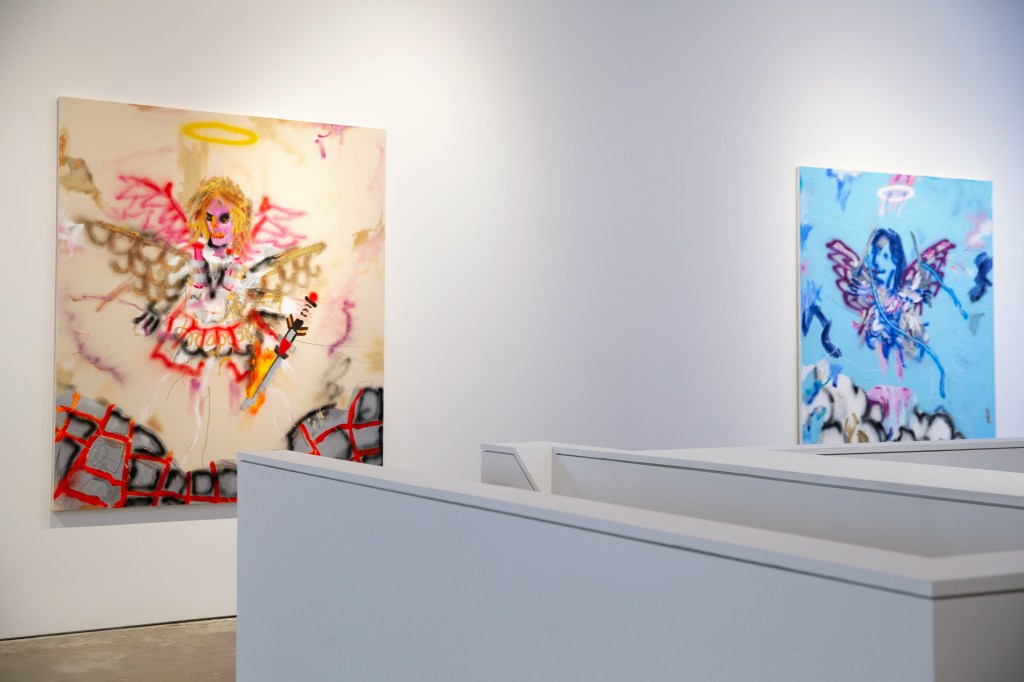