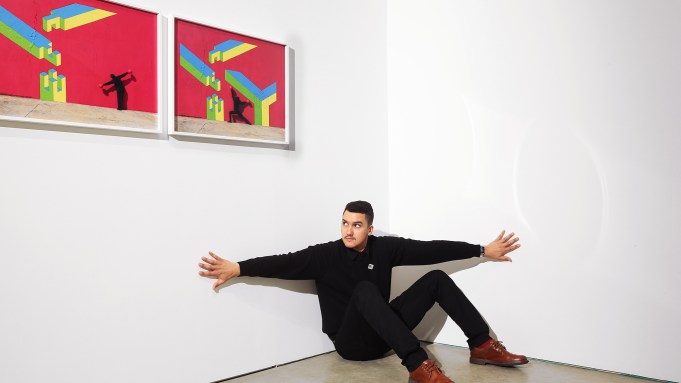 “The show just gets better everyday,” exclaims Robin Rhode, walking through Lehmann Maupin gallery in Chelsea the day before the opening of an exhibition of his latest work, “The Geometry of Colour.”

“It just gets — boom! — fresh,” he exclaims. “You know that feeling when you brush your teeth in the morning?”

The South African artist, who is based in Berlin, possesses an infectious energy. He greets all of the gallery’s staff with the same level of enthusiastic attentiveness that he uses to describe his work mounted on the wall. The multi-disciplinary artist paints large-scale wall murals, photographing them with the addition of a performer; the resulting photograph is the final product. His latest show exhibits a series of mathematically inspired work.

“In this body of work I was focusing on how I could embrace aspects of geometry, aspects of color theory that could become an extension of the human spirit and of human psychology, and different phenomena with regards to color,” he explains. “Over the course of the past three years I’ve been trying to explore different aspects of wall drawing. It was all about having the line and the drawing on the wall becoming an extension of the human body, and the interaction between the body and the drawing.”

The show opens with “Under the Sun,” a series of 36 photographs using shades of yellow and orange presented in an evolving stack of cubes; almost as if to mimic a stained glass window.

“I was doing some research on aspects of the sun when I was traveling to Israel and to Palenstine in 2015,” he explains. “I was doing research with regards to how the sun was related to various biblical miracles that was performed in the Bible, the Torah, as well as the Quran, and how in this particular part of the world, we’re all under the same sun,” he continues. “I was interested in how I could then capture the sun’s rays, from the sun rising in the top corner to how the suns rays could be captured through wall painting through the sun setting.”

Each photo features his performer in various shapes atop a tire; the performer is silhouetted, practically a shadow, in each frame.

The artist uses the same performer in each of his photographs. The young man, Kevin, has been working with him for seven years.

Although the artist lives in Berlin, he was born and raised in South Africa, and returns to the same wall in a suburb of Johannesburg for all of his large wall work. As a result, the same vertical crack is visible throughout all of his work.

“It’s this continuity about embracing one particular surface and trying to re-create a new narrative on the same form, so that a surface can have multiple meanings. You don’t always have to move around to discover new surfaces,” he says. “The symbolism of that crack is very powerful because it relates to this idea of the broken wall. If something is cracked, it means something is broken or about to crack,” he continues. “And when something is cracked, something seeps out. What is seeping out? These works of art are seeping out.”

The wall is located in a neighborhood still reeling post apartheid; the suburb faces high levels of gang activity, drug abuse, unemployment, and violence. Rhode recruits problematic young men, a “crew” ranging in age from 18 to 22 years old, to help him create his pieces. The idea is to create a group identity through the group activity of creating something abstract.

“I’m hoping that this process of art functions as a kind of rehabilitative moment for them,” he explains. “And I think in many instances it does become a rehabilitative mechanism to help them see the value of culture, art, wall drawings, how it can empower — arts empowered me — and how that can have an effect on the community as well.”

In “Black Friday,” he uses his performer as a symbol of consumerist culture, cowering in a shopping cart underneath a large cube representing one billion; the cube is whittled down in subsequent photographs to 100 million, 10 million and, finally, a cube of one million.

“Black Friday exists in different pats of the world, and in South Africa it’s a big thing. This phenomena of Black Friday which is supposedly an American phenomena has infiltrated other societies around the world,” he says. “And that’s what my work’s all about, how global phenomena does have an impact on other geographical peripheries, has implications in other parts of the world.…This is my reflection on those kinds of phenomenas.”

Other works in the show further explore color’s effect on geometry by culling from Monet’s colorpalette (“Paradise”), as well as inverting the RGB color spectrum (“Inverted Cycle”); in “Frustrum,” Rhode uses acidic colors to offset the geometric shapes depicted. He was inspired by the work of Polish poet Stanislaw Lem, who used math and geometry to symbolize aspects of the body and emotions. In “The Cyberiad,” he writes, “Come, every frustum longs to be a cone/And every vector dreams of matrices./Hark to the gentle gradient of the breeze:/It whispers of a more ergodic zone.”

“A frustrum is a kind of conic shape with the top of the cone sliced off,” Rhode explains. “Us as humans, we are frustrums with this desire to be fulfilled, because we are incomplete in some way and we need to be complete. Our hearts are frustrums.”