Wright's film — set in remote Wyoming — premiered at Sundance and is being released this week.

Robin Wright directed “Land,” but that doesn’t mean she stayed behind the camera during filming. Set in the remote wilderness of the Wyoming Rockies, the film also stars Wright in the lead role of Edee, a grieving woman intent on living off the grid and off the land. “Land” features sweeping landscape shots, and limited dialogue — her costar Demián Bichir shows up midway, as a hunter who rescues Edee from a near-death experience and becomes a platonic outdoor-survival mentor and friend. “The film is about hope and human resilience,” says Wright.

After premiering at the Sundance Film Festival on Jan. 31, “Land” is being released in limited theaters by Focus Features on Friday. Wright discusses her experience of bringing the film to the virtual film festival, how the experience compared to directing episodes of “House of Cards,” and the healing power of nature.

WWD: What it was like for you to “bring” this film to Sundance?

Robin Wright: We were so over the moon when we got accepted into the official selection at the Sundance Film Festival; just such an honor. And especially during this time that we’re in quarantine, and everything’s virtual and we can’t be in Park City in a theater together sharing the experience of this movie, or any movie. It’s such a different world, doing this Zoom life. And yet it’s still resonating.

We feel so blessed that people are feeling the movie. It is very relevant to what’s going on today, of being disconnected from our loved ones. We’re not living the norm. The message in this movie is about that very thing. You’re going with this one character, experiencing her journey of how she deals with grief and then this beautiful stranger coming into her life. He stumbles upon her path and basically rescues her heart back to life, and they both give each other redemption.

WWD: In terms of coming to the script as a director, were you looking for a feature to direct and then you found the script, or was the decision to direct a reaction to coming across it?

R.W.: I had been reading scripts to direct. I was on a TV show called “House of Cards” at the time, and I knew the show was coming to an end. And I started reading material, and this one just clicked. It was during the time when we were all witnessing, and many were experiencing, loss and tragedy during the random shootings that were going on almost biweekly. And this film spoke to that; it speaks about how you can become free again and open again and find life that you thought you couldn’t ever find because of the tragedy that you’ve experienced.

WWD: You directed a few episodes of “House of Cards.” How did directing a feature film compare to those experiences?

R.W.: Well, this one in particular was very different from “House of Cards” in that the whole thing was shot 8,000 feet up on the top of a mountain in Alberta, Canada. And we were dealing with the unpredictable weather patterns that are incredibly beautiful and wicked at the same time, versus “House of Cards” where we were on a stage 90 percent of the six years that we shot that show. 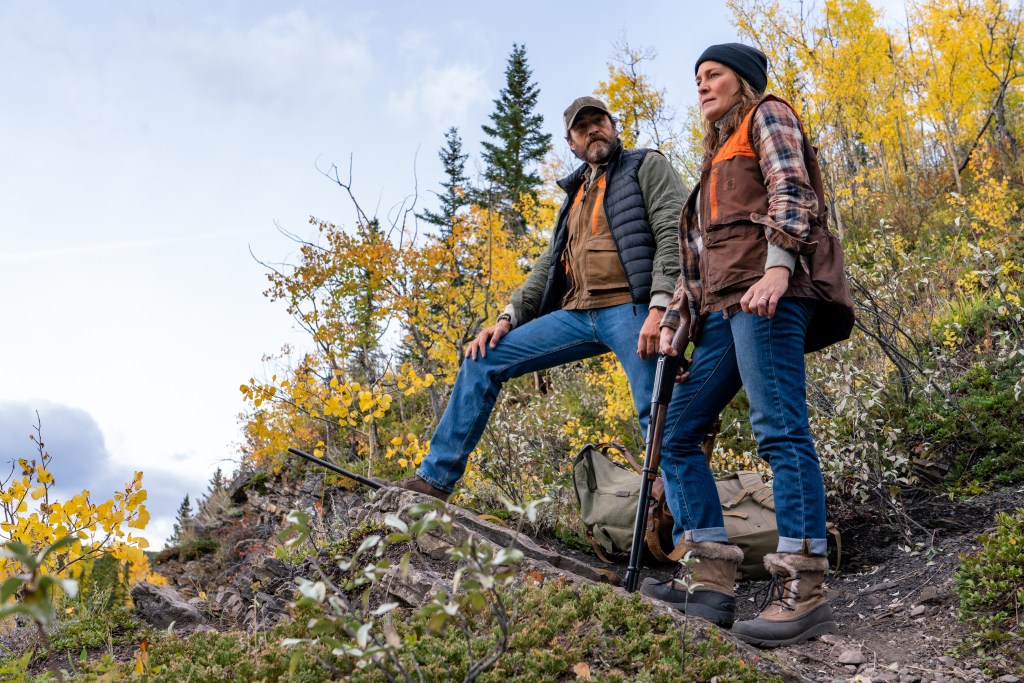 WWD: The environment is a very prominent character in this film. What was your process for directing all the landscape shots and of telling the story through place?

R.W.: [Director of photography] Bobby Bukowski is such a man of nature. I literally think he opts to sleep in a tent versus a house most of the time. He and I had many, many discussions about how nature is a character in this movie. How do we want it to be seen in the beginning of her journey, where [Edee’s] not seeing it, she’s not communing with it? It’s not communing with her in the beginning. And then once she finds herself feeling a rebirth, with the help of this beautiful soulful stranger that basically saves her, then she starts to become one with nature. So we talked a lot about how much more the world opens up to a person that’s been locked in their grief, and how nature is medicine. Its healing properties definitely exist.

And Bobby slept in my character’s cabin most of the time, up in the little loft bedroom, so that he could capture the beautiful sunrise, wicked snowstorm in the middle of the night, or the torrential rains that came. All those shots are because he was up there with that camera on his shoulder.

WWD: You’ve been directed by others many times. What was unique about directing yourself, versus having someone else in that role? And with this movie in particular, where so much of the screen time is just you and one other character?

R.W.: Well, it’s a testament to having an incredible group of producers, which I had, on the set all day, every day. Three female producers. We had discussed this movie, this character, the dynamics between Miguel and Edee for many, many months prior to shooting. So we all knew the story we wanted to convey, the tone we wanted to put forth.

And that being said, it was — what did we want people to walk away from this movie with? And the collective was, this is about hope and human resilience and how empowering it feels at the end of this movie; there is light at the end of the tunnel. You’re going to find your way, you’re going to find a new self. So I knew they knew what needed to be achieved in each scene. So, if I was in front of the camera, they were my co-directors in the tent watching playback.

WWD: Was it always your intention to star in the film?

R.W.: No, that was never the intention. We had a very slim window of time. Once we got financed, we needed to bust a move and get up on that mountain before we lost the weather that we needed to shoot in. Because we needed four seasons, and the film spans over two and a half years. And we only had 29 days to shoot it, so we couldn’t take the risk of waiting to see if we were going to get it cast in time. So the producer just said, “I think you’re just going to have to do it, Robin. I mean, we don’t really have a choice right now.” I was like, “Well, I’m going to be up there anyway, so, OK.” 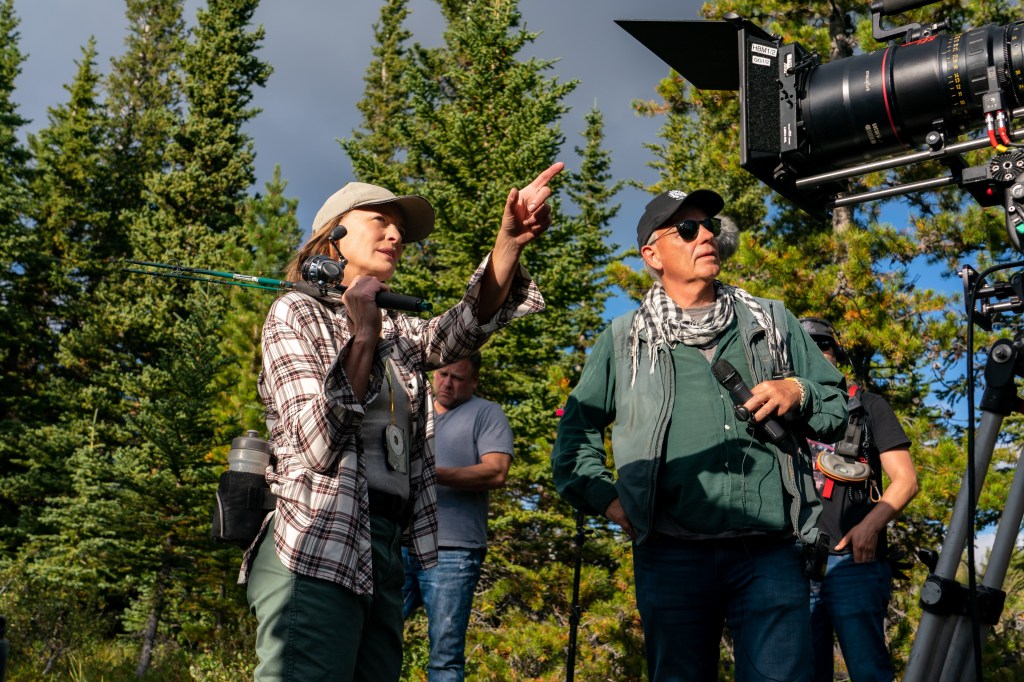 WWD: When you first got the script to now, how has the story evolved? Did you tweak what was on the page when you were making it?

R.W.: We did early on, we added more beautiful, comedic moments; sweet, heartfelt moments with Miguel and Edee. And we actually had scenes that we did shoot of her past. So you kind of got to see what life was before. And we just decided in the editing process that we didn’t stay engaged on that journey with her and then Miguel coming into her life. The elliptical flashbacks seem to be sufficient with memory and how we remember, and how you hold on to those memories and those experiences, and how you keep them in your mind; you keep them in that safe little pocket. And it was how do we slip those in the movie instead of having dialogue scenes about it? It just kept you more emotionally engaged.

WWD: In terms of casting the character of Miguel, what qualities were you looking for in actors that you were considering?

R.W.: Well, [Bichir] kind of checked all the boxes, I have to say. The minute I saw him in “A Better Life,” I was blown away by his performance and just how deeply soulful he was and what he played in his eyes without speaking. And I knew right away that he was the actor to play Miguel.

And then I saw him in “The Hateful Eight” and he was hysterically funny. I thought, what a range this guy has, and he’s underrated. We need to see more of him on the screen. And he came over to my house for a meeting and he said, I have to do this movie. And I said, well, I need you to do this movie. And we had the same chemistry that we have on the screen. The minute we met, it was as if we’d known each other our whole lives.

WWD: What are your own outdoor survival skills like, and what has been your own relationship with nature and the outdoors?

R.W.: From childhood, we, as a family, camped all the time. We were always getting in our VW Vanagon. We would go across the country and pop a tent or go into a KOA campground. And that was much of my every summer — traveling and camping and seeing America. So, this was not very foreign to me. I love nature. And I just felt like this story was so, yes, relevant, but pertinent. People want, right now in this quarantine, more nature. They’re finding that they need to do more, get out and breathe the air and hug the tree and look at the sky. And you know, this confinement that we’re in, that’s beautiful medicine.

We had a mountain man who knew how to do everything you could ever imagine if you were to survive on your own, off the grid. He was incredible, and I think he actually lives off the grid himself in real life. He taught us how to chop wood. He taught us how to skin a deer. How to properly light a fire — you know, that’s one tricky thing, like, how do you keep a fire going? For me, it was really tough. We definitely have more skills now, Demián and I, but I think I’d feel more comfortable going off the grid if I had my mountain pal with me.

WWD: Do you know what your next project is? Are you interested in directing more, or developing anything along that line?

R.W.:Yes. Yes. Yes. I’m going to direct in a couple of months, a couple of episodes of “Ozark.” That’s exciting. Love that show. And then, yeah, in the works developing other things to direct down the line, for sure.

WWD: What kind of stories are you looking for at the moment, or do you find yourself gravitating toward right now?

R.W.: My gut is kind of being pulled into a smart comedy. I feel like we need to laugh more. 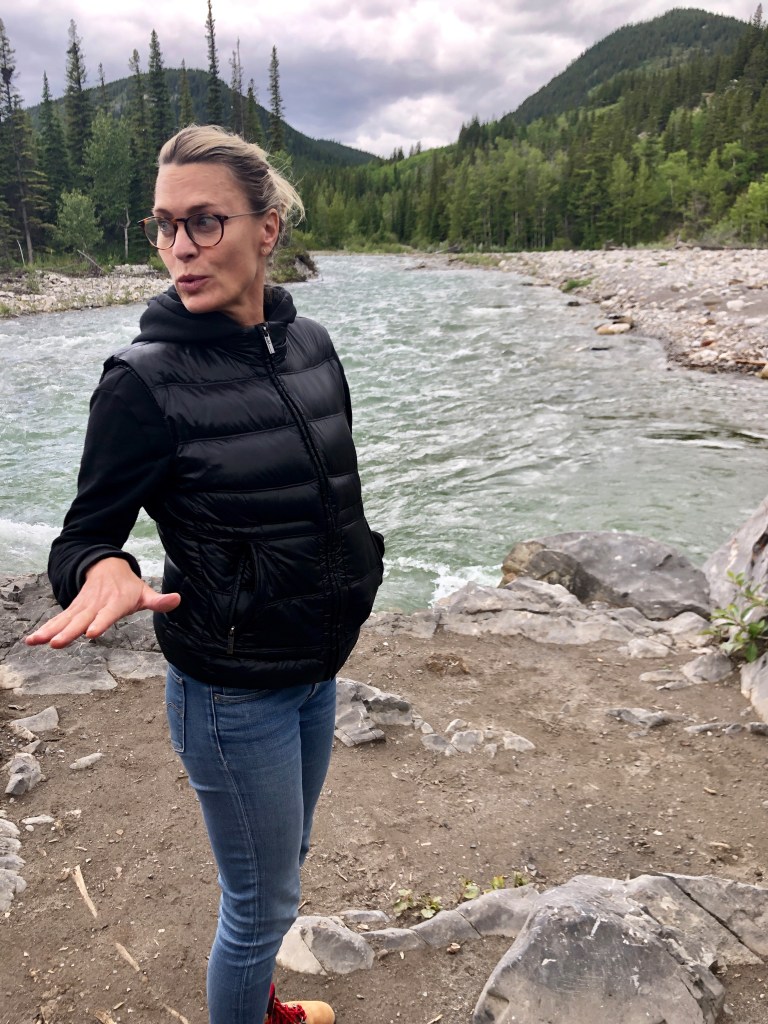 Robin Wright on the set of “Land.”