The DeBeers LV store opening party was met by protesters, including Gloria Steinem, complaining about how the diamonds were mined. 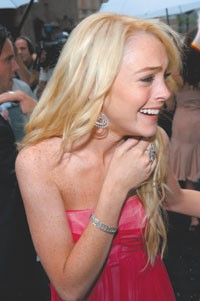 NEW YORK — “Shame on you people. Why are you doing this? People are dying in Botswana!” yelled one of the 15 protesters standing on 55th Street and Fifth Avenue, across the street from where the De Beers LV store opening party was taking place.

“I feel like I should bring them lemonade or something,” said Alyce Alston, the new chief executive officer of De Beers USA. “How would that go over, me being the Martha Stewart of De Beers?”

No thanks, was the essential response that came from Gloria Steinem, who made a guest appearance at the protest, wearing a black-and-white poncho and holding onto a placard with a photograph of a naked African man that read “The Bushmen aren’t forever.”

“The Kwei people had been living in their very learned and balanced way for 50,000 years before De Beers began supporting their removal from the lands to camps that are unspeakable,” Steinem said. “If people knew what was going on in Botswana, they would not be attending this party.”

It didn’t appear partygoers were paying much attention to the protest outside, as Lindsay Lohan was on the inside.

The teen starlet was flitting around in a fuchsia Roland Mouret dress with an army of security people and press handlers.

Asked if the Kwei people should be allowed to remain on their land, the “Herbie: Fully Loaded” star, trying on a gigantic diamond pendant barked, “I have no comment on that.” Lohan looked to her publicist for approval.

Then, Kathy and Rick Hilton walked in and made a beeline for her.

Hilton was wearing a pair of mammoth diamond earrings. Had she been concerned about where the diamonds came from?

“Um, no, I hadn’t thought about that when these were given to me as a gift,” she emphasized.

She then began to talk about her new reality show.

Soon after, Teri Hatcher showed up in a blush Versace dress.

As the very peaceful protesters began to disperse, a minidisaster of another sort occurred when singer Vanessa Carlton arrived and it turned out she had no loaner jewelry. Publicists for the event then shuttled some baubles to her car, where she remained for at least 20 minutes, trying them on. She emerged with a respectable rock on her finger. When did she get that gorgeous ring? “About five seconds ago,” she cooed, “but I’m hoping to wear it for longer than that.”