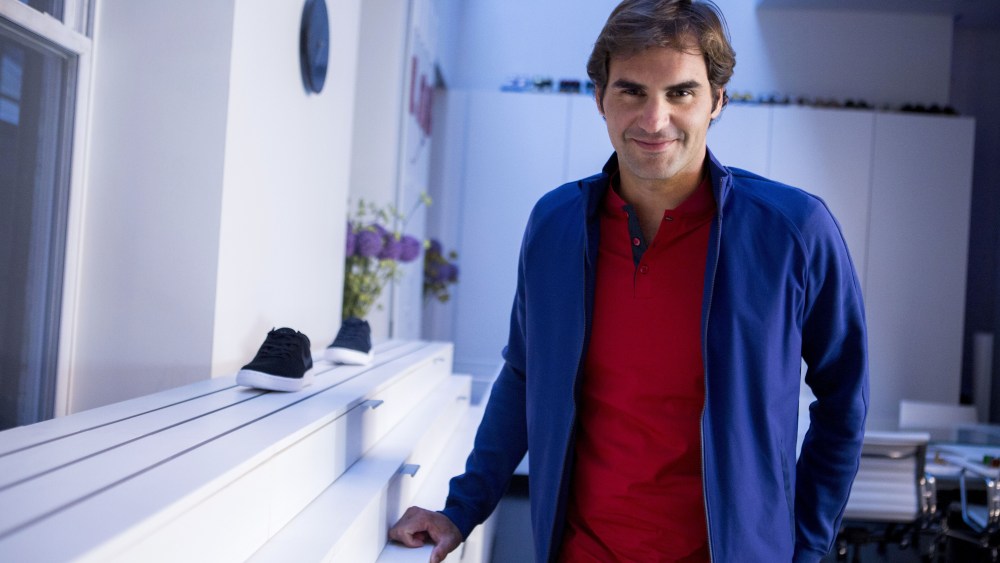 When Roger Federer does something, he’s all in. Whether it’s his storied tennis career, his approach to rehabbing the knee injury that is keeping him off the court this season, or his collaboration with Nike, he gives everything 100 percent. The 35-year-old Swiss tennis star, considered by many as the best player to have ever picked up a racquet, was in New York to help introduce the second edition of his Nike x RF off-court collection for the sporting goods brand. During an event at the NikeLab 21M store in SoHo, Federer discussed how he loves visiting New York and exploring its “many corners” and seeing how people “take chances” in how they dress. Surrounded by looks from his new line, he described how involved he was in choosing the colors, fabrics and fine points of the collection and how some subtle details were inherently personal. For instance, the 50 dots on some pieces are a nod to the 50 aces he had in a match against Andy Roddick in 2009 at Wimbledon. The five dots on others harken back to his early years in the sport where he was admittedly “brash and had a bad attitude.” That didn’t sit well with his father, who left the young player on the court to find his way home alone, leaving a five-franc piece for him to ride the bus and teaching him a valuable life lesson. “When you act like that, you need to feel the pain,” Federer said. After a short Q&A at the store, Federer sat down with WWD to discuss his fashion sense, the Olympics and his planned return to the sport.

WWD: Looking at how personal the line is, you really seem to have embraced the design process.

Roger Federer: Yes, otherwise I wouldn’t do it. I like putting in the time. I invited all the designers to my flat in Zurich and my house in the mountains; they’ve been to my flat in Dubai. And I wanted them to see my life, how I live away from the court because a lot of people don’t know who I am. They met my family, my wife, the people I surround myself with. I thought it was quite important for them to get the feel and the sense of it so they would get inspired and get some ideas and we can do this whole collaboration thing. For me, this collaboration with Nike was very cool. I know a lot of people say it, but I never thought I would be doing cool stuff like this for Nike. I was just the happiest guy on the planet back in the day when I was getting a pair of shoes and a new match shirt every three months, and now here I am 20 years into my career and I’m doing this really cool stuff. It’s very special so I wanted to get it right — like a Swiss guy would.

WWD: The fact that there’s a round two for the collection would indicate that round one was good.

R.F.: It gives you a second chance and a third chance hopefully and we’ll see where it goes from here. I know how it works, you’re always working one-and-a-half years ahead so it’s tough. In tennis terms, you’ve got to stay on the ball and it always keeps rolling. We already have meetings set up [for the next line] and I’m looking forward to it.

WWD: Do you have a favorite piece in the new collection?

R.F.: I like jackets. Jackets always work. I’m a big T-shirt guy — I wear so many in practice and then away from the courts. But I think jackets are crucial to an outfit. You can always throw them on. And then shoes: I grew up in the whole Jordan time, and Shaquille O’Neal was a big guy for me, too. When I was growing up, basketball was big. So sometimes when I get dressed up, I think shoes first: what shoes would I like to wear today, and then my outfit goes from there.

WWD: What did you think of the Olympics? Were you surprised by the outcomes at all?

R.F.: In tennis, I wasn’t so surprised. The surprise was Djokovic losing early, but then Andy Murray winning at the end, you could kind of predict that. I was happy that Rafa [Rafael Nadal] had a great run and won gold in doubles. I thought that was quite cool. And I just enjoy watching volleyball. I don’t know what it is, I think it’s so exciting, beach volleyball or indoor volleyball. And then, the U.S. basketball team winning gold again. It’s always to be expected, but I was happy that they did that. And of course, I was following the Swiss. We got some good medals in cycling and in triathlon we got a silver. I thought the atmosphere was good but I missed being there.

WWD: Were you disappointed that you couldn’t go?

R.F: Yes, it was disappointing because I tried everything up until the last minute. I spoke to my doctors, my team to see if in some way, shape or form I could make it to Rio. But because I’ve never been to Rio and I don’t know the stadium, the disappointment was in check. The U.S. Open will hurt more because I know Arthur Ashe Stadium, I know the city, I know the people here, I know the people who run the tournament. I know everything and I think this one will hurt more.

WWD: Are you climbing the walls not being able to compete? It must be really hard for you.

R.F.: Once you realize that health comes first, it’s OK. You let go of everything that was important to you before. Of course, family, friends — all that comes first — but once I made the decision that health comes first in tennis terms, I said this is not the end, this is actually the beginning of something new. So I looked at it in a positive manner. I’m a very positive-thinking person and so far it’s been quite easy. The days are slower, which is great. I have more time with the kids, I’m doing my rehab, my strengthening. I haven’t had to do surgery, so I haven’t been on crutches or anything, so life’s good actually considering I’m not on the tour.

WWD: You tweeted out some pictures of yourself back on the court a few days ago, so that’s a good sign.

R.F.: Yes, that’s a good thing. At least I can hit some balls. I have plenty of time. I go out, I hit 20 or 30 minutes sometimes, hit some serves, do my exercises. I think it’s good to stay in touch with the tennis ball. I don’t want to do all this hard work in the gym and then you come back and you forgot how to play tennis. That’s not going to happen, it’s like riding a bike or skiing, you never forget how to do it, but it makes me happy to hit tennis balls. I love playing tennis dearly so it’s a lot of fun practicing.

WWD: So you’re targeting next year for your return to the court, right?

R.F.: It’s going to be big. I will as prepared as I’ve ever been in my career. I’ve never had six months off before. The longest I was ever out was seven, eight, nine weeks max. I had a groin [injury] in 2001, I twisted my ankle once and was back in three-and-a-half weeks, so this is a major decision for me not to play for four or five months. Maybe I could have played three or four months later, but then I would have had only two tournaments, so I’d rather take six months and be superstrong when I come back in January.