Nobody could accuse Ari Graynor of being a prima donna on set. 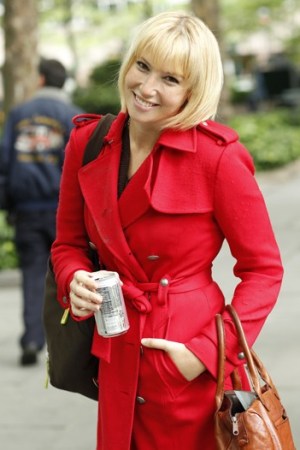 Nobody could accuse Ari Graynor of being a prima donna on set. For her breakout role in the 2008 teen comedy “Nick and Nora’s Infinite Playlist,” the actress spent countless hours over a grimy toilet bowl to play Kat Dennings’ hopelessly inebriated friend.

“For some reason that’s the part people remember, this comedic lady, but I’ve done my fair share of drama,” Graynor says.

The 27-year-old Boston native got her start on the boards as a child actor in the Wellesley Players in Massachusetts, but elected to study liberal arts at Hartford’s Trinity College.

“I didn’t want to study theater or go to school in the city,” she says. “I wanted the all-American ‘Here’s your quad’ college experience.”

But it didn’t keep her from auditioning. During school, she booked her first television gig playing Jamie-Lynn Sigler’s college roommate on “The Sopranos” and her first film role in Clint Eastwood’s “Mystic River.” Ultimately, she dropped out of school to make her Broadway debut in Donald Margulies’ “Brooklyn Boy,” which she followed up with Douglas Carter Beane’s “The Little Dog Laughed.”

“I’m such a theater geek,” she says. “Most of my friends are in this community, and it’s really important for me to keep doing it. It takes the ego out of acting, whereas movies tend to involve it.”

Indie films such as “Holy Rollers,” which opens in theaters this week after premiering at Sundance, are an exception, Graynor says. For one, the story lines are quirky — Graynor plays the girlfriend of a drug dealer who catches the eye of an Orthodox Jewish drug runner, played by Jesse Eisenberg — and the shoots are no-frills.

“We struggled throughout, so there’s a real sense of community at Sundance, like ‘Wow, we made it,’” she says.

Fortunately, Graynor has been on a roll with bigger-budget fare, as well. She just wrapped “Betty Anne Waters,” in which Hilary Swank portrays the true-life character who became a lawyer to exonerate her wrongfully accused brother. (Sam Rockwell is the brother and Graynor plays his daughter). She also co-stars in the dark comedy “Lucky” with Colin Hanks as a man who wins the lottery then pursues his longtime crush.

She is currently in her hometown shooting “What’s Your Number?” with Anna Faris. The two play sisters, with Faris determined to cull her list of boyfriends past (the title refers to the number of romantic encounters one’s had) for a date to her sister’s wedding.

“We hit it off like gangbusters,” Graynor says. “There’s not many legitimately funny women out there, and she’s really forged a place for herself, which I admire.

“As an actor, your life is constant ups and downs. My friends and I joke that when a job ends and nothing is lined up, you have nothing to do for the rest of your life. You just ride that wave.”

At least Graynor has a back-up plan. “I love to cook for people,” she says. “I equate food with love.”

One of her latest recipes is a duet of slow-cooked beef ragu over fresh papardelle next to butternut squash and mascarpone ravioli. “My dream would be to go to the Hamptons and have Ina Garten [the Food Network’s Barefoot Contessa] cook me some comfort food.”