Five years ago, the thought of stomping down a mirrored black runway in a vampy purple mini and several coatings of azure eye shadow at a Versace show would never have crossed Irina Lazareanu's mind. 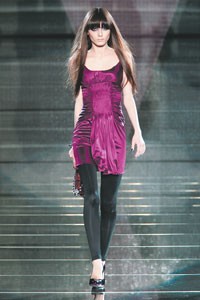 NEW YORK — Five years ago, the thought of stomping down a mirrored black runway in a vampy purple mini and several coatings of azure eye shadow at a Versace show would never have crossed Irina Lazareanu’s mind. But now it’s a reality, thanks in no small part to her pal Kate Moss.

The waifish songwriter met Moss through the notorious Pete Doherty and even collaborated with her on the Baby Shambles song “La Belle et la Bete.” The iconic muse urged Lazareanu to meet her Paris agent, and Lazareanu’s career has since snowballed. She’s worked for everyone from Nicolas Ghesquière to Karl Lagerfeld, and this season walked the runways of Prada, Burberry, Yohji Yamamoto, Michael Kors and Marc Jacobs, to name a few.

Unlike typical “It” girls in modeling stories — willowy mannequins discovered peddling fruit at a family stall in Russia or playing volleyball in a sweaty gym in São Paulo — Lazareanu had other aspirations. Born in Romania and raised in Montreal, she studied ballet at the Royal Academy of Arts in London. She debated moving and continuing to dance, but something “naughty” came up. “I met some, um, naughty English friends and decided to stay,” Lazareanu says in a pause-ridden explanation.

The “friends” she’s referring to are Doherty and the rest of the musicians from The Libertines and Baby Shambles. “I was working with Pete on the Shambles and did the tour in 2004,” Lazareanu recalls, “doing 10 shows in two weeks and staying in the Shamblemobile — this giant green van we all rode in.” And then with a snicker, adds: “A lot of things happened in the Shamblemobile.” The details are sparse, but she makes references to head wraps, guitars, gutters and Oscar Wilde.

And as lively as those days were, it’s no surprise the only one she stills keeps in touch with is Moss, “because she’s really been helpful in my career and giving advice.”

And that’s exactly what Lazareanu hopes to become. “I do miss it,” she says. “I just hope that Sean [Lennon] and me, and other people, like Devendra [Banhart], find some time to work on my record.” Her songs are influenced by the Sixties and Seventies, and she describes it as “folksy.” But she admits to nervousness about her first solo attempt. “It’s the first time I’ll be alone in the studio, the first time I won’t be with my crazy crew,” she explains, “so I need to take some time to find the right way to say things.”

Being in the current ad campaigns for Anna Molinari, Mulberry and Balenciaga has proven a good distraction, although she admits modeling hasn’t been the best source for song lyrics. “Right now I’d call the album ‘Someplace on the Way,’ and every song would be a story. Stories about my life are another way to put my writing into music.”