Meryl Streep, Patricia Clarkson and Naomi Campbell were among those who gathered at Cipriani 42nd Street on Thursday night to fete the fashion world's alleged romantics.

By Marc Karimzadeh and Anamaria Wilson on October 31, 2005
View Slideshow 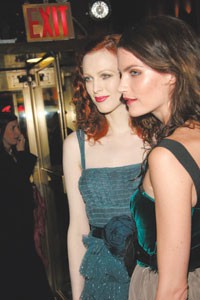 NEW YORK — “We’re here, we’ve landed,” cracked Sandra Bullock after squeezing her way through the thicket of people and cramped tables at the Fashion Group International’s Night of Stars.

Host Simon Doonan kicked off the evening with one of his typically witty introductory speeches. Referencing the honorees as his former lovers, he had the room in stitches as he spoke of everything from combing Theyskens’ long hair each night — “99, 100, 101” — to a fling with Valentino.

“Ours was a torrid affair,” he said of the designer, the evening’s “Superstar” recipient. “Long rain-soaked weekends on Val’s yacht, his nautical ardor going full throttle. And Rome! So romantic, skipping down the Via Veneto, Val and I in our matching open-toed mandals.”

Doonan described how Valentino taught him to spray on fragrance as they stood at the top of the Spanish Steps and walked through a gentle cloud of scent. The designer took the ribbing well, and his table-mate Lily Safra laughed so hard she was near tears.

Campbell sashayed in just in time to hear Doonan’s riff, but soon caught quite a chill. Luckily, former flame Matteo Marzotto left his table and gallantly offered his coat which, of course, Campbell took.

There were other tales of gentlemanly behavior. Bee Shaffer recalled Theyskens saving her muddied pink Rochas gown at the Costume Institute two years ago. “He found a water fountain and sponged my dress until it was perfect,” she said in presenting the Belgian designer with his award. This was Shaffer’s first time speaking at such an occasion and she pulled it off with such poise and aplomb that her mother, Anna Wintour, offered her two-thumbs up from her table just below the stage.

Streep, for her part, waxed poetic about Valentino, literally — she wrote verse for him. “He stays thin, he stays tan, the most elegant man,” the actress lyrically professed.

Bullock, in champagne Valentino brocade, accepted an award for her humanitarian efforts, but it was her figure that was on her mind with this fashion crowd. “Just to ease all your minds — I’m not pregnant, I’m just fluffier than most,” she said, finishing up her speech with, “Designers will hopefully always be able to create outfits which make my top half look bigger than my bottom half.”

Bravo. Not that she needed to worry about such things that night. Doonan, urging the crowd to stick around for more dessert, promised naughtiness rather than caloric intake.

“Donald Trump and Pat McGrath are going to do something rather unorthodox with a bucket of tiramisu,” he quipped.

Sadly, in the end, there was no bucket of tiramisu and afterward, a flock of Valentino pals like Giancarlo Giammetti, Rosario of Bulgaria, John Legend, Charlene de Ganay and Bruce Hoeksema headed to The Double Seven for some champagne, vodka and out-and-out revelry. “I get paid for going to parties, but I am not getting paid to be here,” Legend said. “I came for Valentino.”