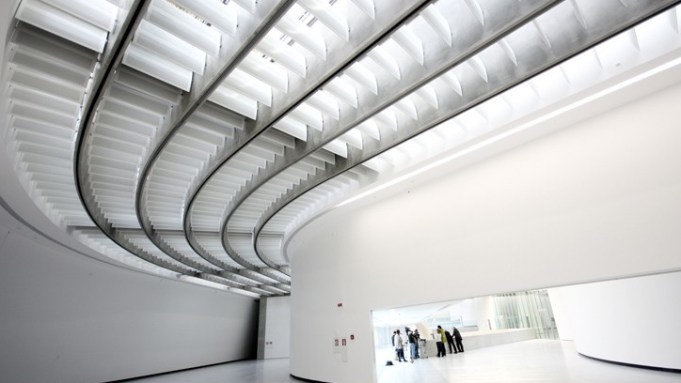 After 11 years, a succession of several Italian governments and about $185 million, the MAXXI, Rome’s National Museum of the 21st Century Arts, is finally open to the public. “I couldn’t believe how it all fell into place,” said London-based architect Zaha Hadid, who designed the concrete structure. “The proposal came just as I was working on abstraction and fluid spaces.”

Hadid’s contribution to the space, which is partially sponsored by Fendi, includes intricate, geometric stairways and a mazelike network of long, razor-sharp fins, paths and tracks that mark the ceilings. Her dynamic lines contrast with walls that curve and fold, and the soft natural light, which settles directly on the art works. “[The space] is organized and navigated on the basis of directional drifts and the distribution of densities rather than key points,” says Hadid, who placed ramps and balconies at different heights, and built a glass lookout jutting out onto the plaza on Via Guido Reni.

The museum is not far from another highly designed structure: the Auditorium Parco della Musica designed by Renzo Piano. And like the multifunctional Auditorium, the MAXXI is more than just a museum. There is also a library, auditorium, cafe and restaurant within the MAXXI, which is 108,000 square feet and located next to Rome’s historic pathway, Via Flaminia.

When architect Hadid took on the assignment, she wasn’t only fulfilling her professional duty.

“I keep a photo of myself as a child by the Trevi fountain in the Sixties,” she says. “At the time, I could have imagined anything but this.”