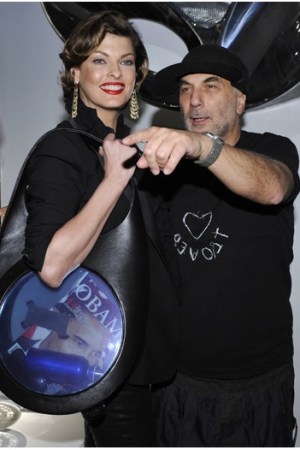 Ron Arad isn’t interested in retrospectives. But during the staging of his latest exhibit, “No Discipline,” which is on display now at the Pompidou center in Paris, the designer found himself delighted by his reunion with older works — in particular three hammered steel Tinker chairs created 20 years ago. “They had never met each other, each one’s different but the same, like siblings separated at birth,” he said.

“He completely changed the stiff ideas of design to make something that really makes us think,” Issey Miyake said Monday night at the opening party, which was also attended by Linda Evangelista, Kanye West and Jean Nouvel.

Evangelista toted a futuristic leather bag Arad made for Notify, of which she said she was very much the instigator. “I told Ron I was dreaming of carrying one of his chairs on my shoulder,” she said, before demonstrating the bag’s liquid crystal technology, which changes from semitransparent to an image of Barack Obama, via his portrait on a magazine cover.

Likening the design to “a washing machine window,” Arad explained the technology is the same as that used to convert windows from frosty to clear glass.

“I’m not a stylist. The world of handbags, like jeans — they’re all basically the same. They change slightly the zip here and different styles basically. And I warned Maurice that for me to do a bag, it has to have something seriously new about it,” he said.

Arad lauded Miyake, Hussein Chalayan and Ohayon as innovative fashion folk, citing Miyake’s A-POC fabric as an example of great industrial design. “The more sophisticated a machine gets, the less machinelike the product is,” Arad said.

But the Tel Aviv-born London resident warned against what he sees are the perils of fame and recognition. “The fashion industry pays a lot to get a celebrity at a party so that goes also to getting a celebrity architect,” he said. “And that can lead to mindless churning out of rehearsed style.”

Sasha Pivovarova, meanwhile, was eyeing a metallic chair to take home. As well as becoming one of Biotherm’s new faces, the model is working on a book of nymphlike drawings with Prada.

Nouvel is gearing up for the opening of his Copenhagen Concert Hall in January, said to be one of the most expensive ever built. And Arad’s singer-songwriter daughter Lail was preparing for a showcase of her own at the Theatre Comedy Club in Paris Wednesday night.

“No Discipline” runs until March before heading to MoMA New York next summer.