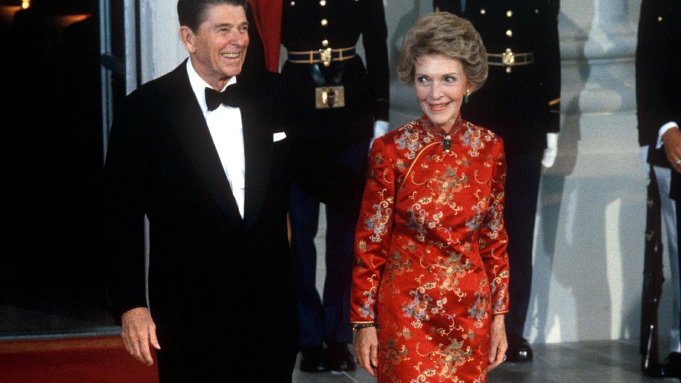 Christie’s is readying a sale that will open the doors of the former president and Nancy Reagan’s California house.

Potential bidders and the just plain curious will find all sorts of Billy Haines “Hollywood Regency” style furniture and light fixtures, porcelain stamped with the presidential seal, decorative works, baubles, handbags and other adornments from the couple’s Ted Graber-appointed home in Bel-Air. The e-catalog goes live at Christie’s Monday, with online bidding slated to start Sept. 19 followed by the live auction Sept. 21 at Christie’s in New York. Those who can’t attend the sale will be able to take a video tour of the Reagans’ California home.

The auction is expected to generate more than $2 million with individual items ranging from $1,000 to $50,000. In keeping with the Reagans’ wishes, proceeds will be donated to the Ronald Reagan Presidential Foundation and Institute. Nancy Reagan died March 6 at the age of 94.

As much of a force as the former First Lady was known to be — celestial and otherwise in the West Wing — she was also a barnstormer about fashion. Interestingly, none of her many signature red suits from designers like Adolfo, James Galanos, Bill Blass, Oscar de la Renta and Arnold Scaasi will be on view. Nor will there be any of the designer eveningwear she wore to host five state dinners, during the high-flying Eighties at 1600 Pennsylvania Avenue.

From the former First Lady’s personal collection, a Van Cleef & Arpels diamond and gold lion pendant brooch and necklace are estimated between $30,000 and $50,000. Christie’s will also be lowering the gavel on an accompanying pair of Van Cleef & Arpels diamond and gold ear clips that she wore on a state visit to the U.K. in 1988, and a Bulgari diamond, sapphire and ruby ring in an American flag motif worn on the Fourth of July in 1986. The former is expected to sell between $15,000 and $20,000 and the latter is pegged between $5,000 and $8,000. An 18-karat gold and diamond Bulgari bracelet should have starting bids of $5,000. A black star sapphire and diamond brooch was one of Nancy Reagan’s favorite, and she wore it to the 1977 Diana Vreeland opening at the Metropolitan Museum of Art. A Ruser coral, diamond and gold brooch hints at her fondness for coral, the gemstone she collected more than any other.

There is also an assortment of handbags and clutches including a black porous crocodile Hermès mini Kelly bag with a shoulder strap and a gold and diamond evening bag. Other resources include Gucci, Judith Leiber and Giorgio Armani. As for her designer wardrobe, “Throughout the last 20 years, a good deal of her clothing was donated to a charity that benefits the Children’s Hospital of Los Angeles. The balance of it is now at the Reagan Library,” said Melissa Giller, chief marketing officer of the Reagan Foundation and Institute.

Britophiles will gravitate toward a pair of Elizabeth II silver beakers — one engraved with a “R” and the other with a “N” that were a personal gift from Margaret and Denis Thatcher. The set has an estimated price of $1,000 to $2,000. Another presidential gift that will be up for grabs is the Tiffany American marine chronometer with a plaque engraved with “Good Morning Mr. President” and inscribed “January 1981 Love Francis and Barbara.” That gift was from Frank Sinatra and his wife in honor of the 40th commander in chief’s first inauguration.

One of the more personal items that will go up for auction is a red monogrammed needlepoint cushion that was given to the president on Feb. 6, 1981 in honor of his 70th birthday from the interior designer Graber. (In 1981, he lived at the White House for nine months to oversee the renovations and later redesigned the Reagans’ Bel-Air house.) Another cushion that will be on the block has an embroidered map of the United States and “You ain’t seen nothing yet, November 6, 1984, Love, Fran and Ray” — a present from the renowned postwar Hollywood producer Ray Stark and his wife.

At 6’2,” the former Hollywood actor and president of the Screen Actors Guild, used his élan to his advantage for political purposes.

President Reagan made a habit of never taking off his suit jacket while in the Oval Office. Just as the decor of that work space was inspired by the West, earthy colors and such Western art as a collection of bronze saddles, Reagan’s own fashion sense had a certain flair. Partial to finely tailored suits with pocket squares, Reagan could be daring with his fashion choices.

He kicked up some controversial media coverage during a European trip in 1982, when he wore a gray and blue glen plaid suit. Speaking to Time magazine at that time, WWD’s publisher John Fairchild, supported that choice, saying, “Good for him. The president didn’t look like a stuffy old goat. There’s some sunshine, some California in that suit.”

None of the two-term president’s suits or accessories will be auctioned by Christie’s. Despite that, Christie’s estimated total of $2 million seems within reach or as a sign in Reagan’s Oval Office read, “It CAN Be Done.”