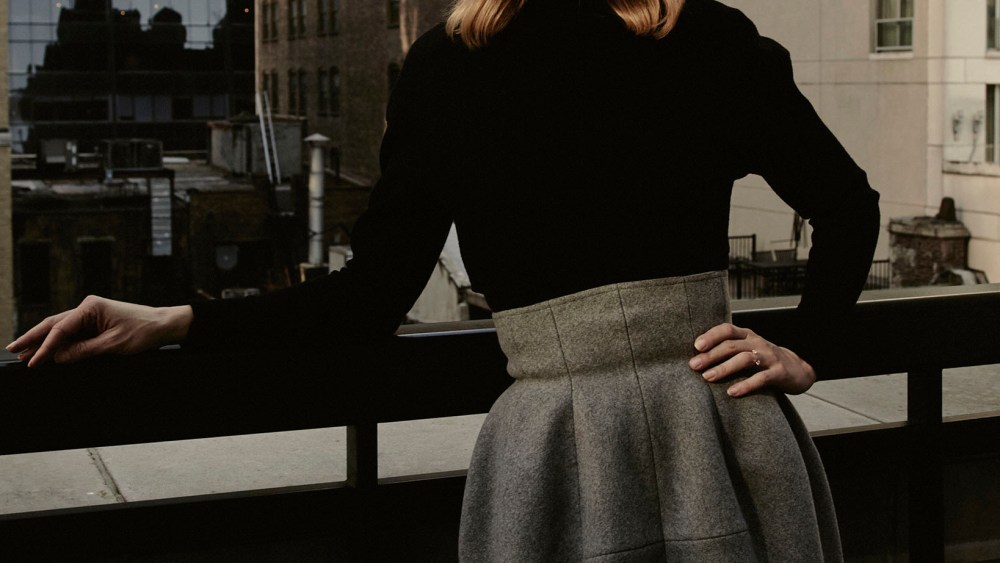 Rosamund Pike walks into one of the suites at the Whitby Hotel — where she’s staying while in New York briefly, on the heels of a one-day trip to Washington, D.C. — introduces herself to everyone gathered in the room, and then starts flipping through the bin of LPs stationed next to a record player. Sam Cooke’s greatest hits are currently on deck, but nearby are Beatles and Petula Clark records, among others. The actress notes that the selection here is better than that in her room. Later, on her way out, she’ll take a few of them with her to listen to.

In person, Pike is just as striking as one would expect. The 39-year-old British actress is friendly and polite, if a touch reserved, but deep in her craft. For her latest project, she entered the world of the celebrated late London Sunday Times war reporter Marie Colvin, who was killed in Syria while reporting on the 2012 siege in Homs.

On a surface level, Pike’s likeness to the character is uncanny. She may be wearing Alaïa now, but on screen — with frizzled hair pulled back, decked in khakis and a vest and sporting an eye patch — her celebrity is easily forgotten.

“I’m definitely the kind of actor who’s seeking to disappear,” Pike says later, as an elegant tray of coffee and tea for two arrives. She politely pours a cup of hot water before fixing a cup of coffee for herself. “To do something in service of getting important stories out there to a broad audience, I suppose; that’s the goal. And inspiring people — and I’m not trying to inspire people on a personal level, I’m not trying to have them find me inspiring. I want them to find my characters inspiring.”

Pike, who was familiar with Colvin’s career before the film but not intimately, studied the reporter’s body of work closely, and watched filmed interviews with her over and over again, to pick up and embody her mannerisms on screen.

“So that in moments of stress I wouldn’t resort to my own mannerisms; I’d have an arsenal of her habits and gestures,” she says, describing, for example, Colvin’s tendency to touch the eye patch covering her left eye (a casualty of a rocket-propelled grenade while reporting in Sri Lanka) in moments of stress. “She was a really interesting physical study,” Pike adds. “Because she wasn’t an on-camera person, and yet she was so charismatic. She hadn’t developed a sort of strategy of masking her [habits], like a news reporter might have developed…she did a lot of licking of her lips and things that if you were on camera I think you definitely would have eliminated and told, ‘Oh, you do that a lot.'”

The film marks the feature debut of 34-year-old director Matthew Heineman, who despite being relatively young has made a prominent mark in the documentary world with his films “Cartel Land,” about the Mexican drug trade and the American vigilantes fighting back, and “City of Ghosts,” about activists in Syria during occupation by ISIS. The former film earned an Oscar nomination for best documentary in 2015.

“I knew [Heineman] was interested in behavior and how behavior tells a story of someone,” Pike adds while describing her preparation process for the film. “I suddenly realized about halfway through the research that I was being put in the role of a journalist, because I had to win the trust of Marie’s friends and colleagues, and that trust was not easily won. She was someone cared about very fiercely and people were also very protective over the more damaged side of her,” she says. “However, I think that any of the things, like her dependency on alcohol or the PTSD that she suffered from, only serves to enrich this complicated woman, and doesn’t take away in the slightest from the bravery and the mission and the commitment to truth.”

Pike originally met up with Heineman for breakfast the day after a screening of “City of Ghosts” in pursuit of the role.

“The passion and intensity with which she both wanted this role and understood this character was incredible,” says Heineman. “It almost felt as if Marie Colvin was coming after an article. I really wanted to find somebody who was going to get their hands dirty and get into the trenches with me, and it became quite clear quite quickly that she was more than willing to do that.”

Heineman uses an immersive vérité style for his documentaries, and “A Private War” reflects a similar approach to storytelling; three-time Academy Award-winning cinematographer Robert Richardson, arguably one of the best, served as the film’s director of photography. Although it’s still clearly Pike on screen, it is almost possible to forget that this, too, is not a documentary. Photojournalist Paul Conroy, who worked alongside Colvin and was with her during the attack in Homs, was on set while they filmed; he’s played by Jamie Dornan.

“[Heineman] completely blurred the line between fiction and reality all the way through,” says Pike. They shot much of the film in Jordan, and many scenes were cast with refugees; people who had lived the actual or similar events being depicted; sometimes, they were filmed telling their own, personal stories. In a scene near the end of the film, Pike literally steps into the role of a reporter. “The women I interview in that basement where the women and children are sheltering, those are women who are telling their real stories,” she says.

“That was quite difficult for Ros and for Jamie and our other actors to work in this environment, which was incredibly heightened emotionally and viscerally,” says Heineman.

In one scene later in the film, a man arrives at a triage room with his injured son; Heineman had spent weeks interviewing different people for the role, ultimately finding a Syrian man from Homs to play the part, whose own nephew was shot and killed during a protest.

“The trauma and the grief that he brought into that room was almost unbearable. At one point Ros had to leave set; it was just so intense. She said to me, ‘Is it OK what we’re doing? These lines between documentary and fiction are so blurred to me, I’ve never really experienced anything like this, and are we exploiting this man?’ And I said to her, ‘This is something I deal with on a daily basis in documentary. You have this human instinct to want to give someone a hug or give them space, but your job, as Marie’s job, was to capture these moments. And he wouldn’t be here if he didn’t want his story and the story of Homs and the story of Syrian people to be told.'”

While in D.C. the day before, Pike visited the offices of The Washington Post along with one of Colvin’s sisters, who is bringing a lawsuit against the Assad government for actively targeting Colvin during their Homs attack. The visit had added gravity, given contributing columnist Jamal Khashoggi’s recent death, which underscored the importance of actively pursuing the truth even when correspondents are actively targeted and oppressed, sometimes by their own governments.

Correspondents like Colvin counter the “fake news” effect of disorienting people to the truth. “You’ve got a president [Trump] who’s trying to silence the press, because it’s coming out with alternative narratives that don’t tally with the narratives that he wants out there, and that’s the case the world over,” she says.

“And it’s because people want to silence the voice of anyone looking for truth. It can be corporations — look at the [Daphne Caruana] Galizia in Malta who was uncovering corruption. She found a car bomb under her car a year ago. Khashoggi, dismembered in the most horrifying attack on free speech,” says Pike. “It was meaningful being in the offices of the Washington Post because that was Jamal’s paper.”

In the case of Colvin, who in the film is called out for being “addicted” to war reporting, she went where the stories were, despite warnings about the danger. She wasn’t supposed to be in Homs, but she went anyway.

“The bottom line is she was getting a truth out there, and exposing a lie, and they weren’t happy with that,” Pike sums up.”It’s a high stakes game. Which is also what makes people feel very alive doing it, and it feels like life is very relevant and the purpose is strong and the stakes are big. That’s why it’s often on dry land her home life felt confusingly nebulous sometimes; just managing paper work and bills and shopping and groceries. She wasn’t always good at that.”

After wrapping filming for “A Private War,” Pike moved on to a portrayal of another trailblazing Marie C. — scientist Marie Curie, who was the first woman to win a Nobel prize.

“I did it straight after this one. So I see them as a sort of strange coupling,” she says of filming “Radioactive,” scheduled for release in 2019. “I’m very lucky to have these two amazing Maries.”

Not surprisingly Pike, who was nominated for an Academy Award for best actress for “Gone Girl” a few years ago, says that she is drawn to stories of provocative women.

“Funny enough, I looked up the name Marie,” she adds. “It’s sort of linked to a meaning of a spirit of rebellion.”