What does the hotelier who has it all get for himself? In the case of Andr? Balazs, it's his own wine label. 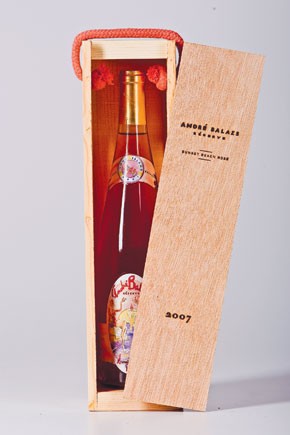 What does the hotelier who has it all get for himself? In the case of André Balazs, it’s his own wine label. The Hungarian-born owner of such carefully curated properties as Los Angeles’ Chateau Marmont, New York’s Mercer, Miami’s Raleigh and Sunset Beach on Long Island’s Shelter Island has long been a famously avid quaffer of Domaines Ott, a $90 French rosé sold at all of his hotels. Starting this weekend, he can offer his own: André Balazs Réserve Sunset Beach Rosé.

This story first appeared in the May 23, 2008 issue of WWD. Subscribe Today.

“I’ve always loved rosé and we sell so much of it,” points out Balazs, who spends time every summer at his father’s house in Saint-Tropez and once visited the Provencal home of Domaines Ott with designs on purchasing it. “I was thinking it would be a small operation,” he says, laughing at his naïveté. “But it’s nine family members working on the vineyard.”

Luckily, his friend Christian Wölffer of the eponymous Long Island vineyard offered to develop this wine, which Balazs specified should be more crisp and light than its European counterparts. The actual mixing, however, was left to the vintners. “I’m an avid consumer, but I’m no expert. I was offering my taste buds,” says Balazs.

The price point for his wine is lighter as well, although still high for a rosé: $55 on the hotels’ menu. (The 2007 vintage will not be sold at retail — “We don’t have enough inventory,” says Balazs, adding they’ll gauge demand and the size of this year’s vintage before deciding whether to sell it at retail.)

As for the label, his cousin, Peter Gergely, a part-time artist, made a double-sided illustration of two bikini-clad girls frolicking at Sunset Beach (as the wine is drunk, a second image reveals itself on the inside). And in keeping with Balazs’ “all in the family” mentality, the girls are inspired by his daughters, Alessandra and Isabel, while their chihuahuas, Jacques and Gilles, adorn the bottle’s neck.

Though Balazs doesn’t have any immediate plans to become a gentleman winemaker, another custom wine isn’t out of the question. “I am a big fan of burgundies,” he says, “so I’ve started looking around, but it’s not about trying to force anything. If it’s something special and something that we can add, then I think we would.”