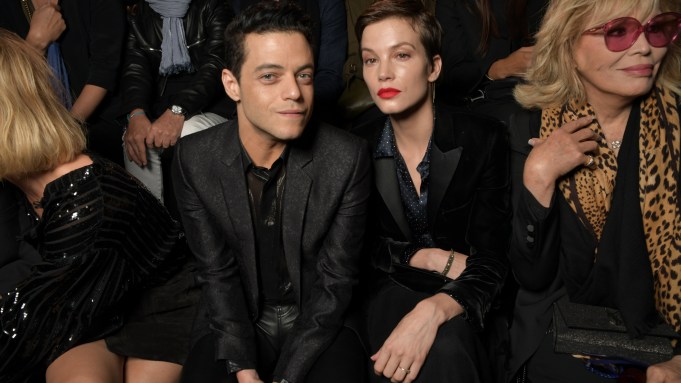 Rosé, Tommy Dorfman, Caleb Landry Jobs, Catherine Deneuve, Rami Malek, Eva Herzigova and Cindy Crawford were among guests who shrugged off the blustery weather in Paris, which added an extra element of excitement to the Saint Laurent show.

The rain gusts arrived just as Béatrice Dalle was admiring the view and surveying the set.

“I’m sure the lights are going to be magical — seeing what’s been set up here — to die for, I bet,” she said, looking around at the rows of light fixtures lining the platform, seconds before the wind kicked up, sending her scrambling for cover along with the rest of the crowd.

Tommy Dorfman was posing for the photographers when a blast of wind suddenly pushed the backdrop forward.

“Listen, sometimes you just have to live,” the actor said. “I survived. Can I have my hat?”

The star of the Netflix series “13 Reasons Why” has been busy acting in the theater and on screen in New York, and will be heading to Miami for the next film — but couldn’t reveal further details. Meanwhile, in addition to dancing and acting, here’s another line for the résumé: “I’m a professional wall-saver!”

Cindy Crawford seemed to relish the excitement of the sudden downpour.

“My gosh, it was insane. It wasn’t raining, until — literally — I opened my car door and then it was a gust of wind and my umbrella went upside down like Mary Poppins,” she added. “Maybe it adds to the ambience tonight — you know, this is always such a beautiful show so I am only worried about the girls not slipping,” she said. Her daughter, Kaia Gerber, would be walking in the show: “Proud mom!” added Crawford with a big smile.

“It’s amazing, I think it’s crazy and I’m so excited to be here,” said the Black Pink singing star, who added it was her first time seeing a Saint Laurent show.

The wind had died down in time for Andie MacDowell to pose with her umbrella in front of the Eiffel Tower.

The actress, who used to model for Yves Saint Laurent in the early Eighties — “He dressed me!” — was in Paris to reconnect with her roots and plug her film “Ready or Not,” which is coming out in Europe. “It’s a great upscale horror movie,” she said, with a glint in her eyes, before gliding over to her seat.